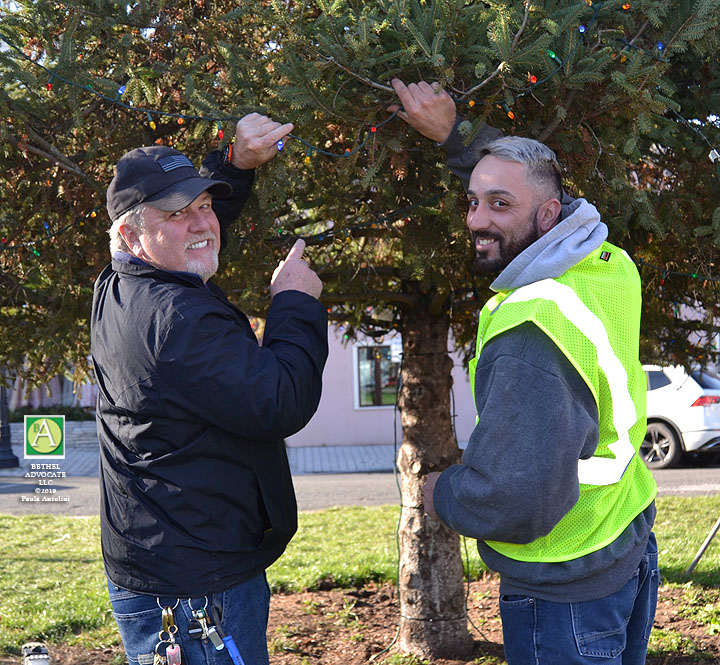 It’s Beginning to Look a Lot Like Christmas … in Bethel

Spotted in Bethel on a beautiful sunny weather day on Thursday, November 21, 2019, were members of the Bethel Maintenance Department hanging Christmas lights on the town tree in P.T. Barnum Square.

Greg Rux and Andrew Freitas were busy at work making sure everything is prepared for the Christmas tree lighting ceremony to take place on Friday, November 29, 2019, the day after Thanksgiving. This required a bucket truck from a private company to be able to hang the lights at the top part of the tree, they said.

Markings are already placed on the grass for placement of all the displays and it appears that they are scattered throughout the square on all sections of lawn, contrary to what the “Religious Holiday Display Committee” had recommended to the Board of Selectmen (BOS), when they suggested only one-third of the triangular property be used for three displays only, to allow room on the other two-thirds of the property for people to safely gather. If more than three display applications were received there was supposed to be a lottery to choose which displays would be allowed, which might have risked the 40-year Nativity tradition being eliminated, but that never happened, and all five displays were allowed.

Now there was discussion by the BOS at the last Special Meeting that displays could be a “hazard” regarding safety, and last we left off, the BOS was planning on discussing this with the Parks and Recreation department. It was also suggested that displays be installed this weekend, but no confirmation on exactly which day or which displays will be installed, has been announced. So we wait and see.

It also appears that no religion, or any organization name, is required to be indicated on the display application in order to have a display approved by the Board of Selectmen, and the BOS actually approved all five application refusing to reveal names of new applicants to the public, at that time. We were only able to discover the names by requesting documents from the town later on. Also view detailed applications here.

The controversy continues into the holiday season, about why certain displays are allowed on the green despite this not being a holiday some of the display owners celebrate, and that they are in fact non-believers in what the holiday celebrates, which is what Christians believe is the birth of Jesus. Some feel it detracts from the respect to the religious holiday displays. Others feel it is their right to display their views on public property, so the town now remains split.

One Bethel resident, Donald Borsch Jr., stated, at the last Special BOS Meeting, that he thought this year’s holiday ceremony on Nov. 29th in the square is “tainted.” He said to the selectmen, “I want to see how you guys are going to work through this debacle. I know people are not optimistic about the WinterFest because somehow it seems tainted and I want to see what you’re going to do, and see if you can manifest wisdom, to be honest with you.”

Another Bethel resident, Bryan Terzian, member of the Bethel Board of Finance, stated, “The only thing I would ask this year is that we remember the quaint charm of our New England town, and hopefully all the displays that come in match the character and the beauty of Bethel and enhance it rather than detract from it.”

Bethel resident Cynthia McCorkindale, also a member of the Bethel Board of Finance, said, “I hope it’s not a distraction and is in keeping with the universal message.”

Amy Santinella, who said this was her first meeting she attended, said, “We need to keep the integrity of town square. There’s been a tradition for as long as I’ve been here. I’ve been here for 47 years.” … “I don’t agree with what was done last year and how it was approached” … “I’d like to know more information in the future about how things are moving forward.”

Bethel resident Karen Foster said, “I want to thank you for looking out for all citizens and making sure our legal rights are protected no matter what our beliefs or our thoughts, and thank you for protecting Bethel as well from future lawsuits by following the law and the Constitution.”

Resident Bob Legnard, member of the Planning Zoning Commission, said, “Having read something in the paper today about the possibility of there being there being five things on the square, I think it’s a good compromise. I agree with the ones going on there should go on there.”

Rux said the Parks and Recreation Department would soon be handling the installation of the Christmas lights on the lamp posts in the square.

Various ceremonies are planned in P.T. Barnum Square throughout the holiday season.