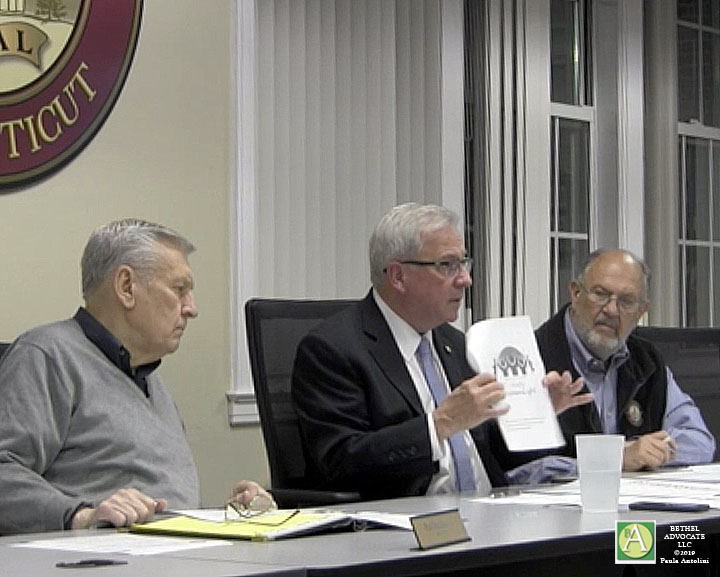 VIDEO: Bethel Board of Selectman Approved All 5 Religious Displays but Knickerbocker Refused to Reveal Names of Applicants or Religious Affiliation of Displays

In a shocking demonstration of non-transparency the Bethel Board of Selectmen approved all 5 religious display applications last night at the Board of Selectmen (BOS) Special Meeting, however, First Selectman Knickerbocker refused to reveal the names of the two new applicants or the religious affiliation of the displays to the public when asked.

The first question asked for the names of the new religious display applicants and the religious affiliations of the displays and Knickerbocker uttered a flat, “I’m not going to do it now,” without any real explanation. We repeated our question, astonished that he was withholding this information from the public and not addressing a Point of Information, as we asked if he really intended on not revealing that information, and again he simply said, “No, I am not.”

We also then pressed on to the second part of our Point of Information and asked about the one-third rule made by the BOS at the last meeting that pertained to religious displays, that stated religious displays could only occupy one-third of P.T. Barnum Square to allow room for residents to gather. We asked this because it seems the selectmen were saying the displays were a hazard (based on the fact that it appeared they were spread throughout the triangle). We were cut off in mid-sentence, as Knickerbocker said, “We have no debate, discussion or public input.”

It was at that point Knickerbocker got extremely annoyed by my question, “You’re not going to give us the names of the organizations?” He replied angrily, “No I am not, and we are going to move on with this agenda. We have have a tight schedule.”

He then became belligerent and threatened to have me removed from the meeting, after I said, “You don’t think the public deserves the names?” Knickerbocker said, “We’re going to recess and ask you to leave if you don’t stop.”

View meeting video below, in part, and view mark 23:27 for the refusal to release information to the public:

So there you have it, NO transparency in government. NO information for you.

Here’s the short clip of the outburst:

Knickerbocker began speaking about the first item on the agenda, “Consideration of Holiday Display Applications,” by discussing the Religious Holiday Display Committee, and said, “The task of the committee that recommended the policy, that made recommendations to the Board of Selectmen, was to comply with the law number one, also be inclusive too and respectful of all traditions, not only the one we have been discussing but other traditions as well. The property in question belongs to all taxpayers of the Town of Bethel. By law they have the right to access it, within certain restrictions, and within a policy that allows anybody to use it. And the challenge that we faced was to create a policy that respected that. It’s truly an all-or-none situation.” … “If we allow any display there has to be an equal and fair opportunity for others to do the same. And tat was the task we had ahead of us when we formalized the policy.”

Knickerbocker announced he was not going to be recommending as lottery for the 5 displays, despite their previous policy saying there would be a lottery if they received more that three applications, and he said, “The applications have been vetted and they conform with the policy, insurance forms have been submitted, images have been submitted. So they are the Creche, which is the traditional one that was on display on the green last year, Mr. Hillman’s Menorah, and thank you for your fundraising on that, the, call it the Atheist banner, but says ‘Happy Holidays from your friendly Atheist neighbors’, that is application number three that is also within the permitted guidelines. Two new banners, and these are relatively small, one simply says ‘Peace’ and the other one says ‘HumanLight’ … it says ‘Happy HumanLight Reason Compassion Hope.” Knickerbocker said, “I personally find these to be in conformance with the policy that was outlined last summer and I’m going to make a motion that all five be approved.”

When the display designs were discussed people hardly got a glimpse of the new display designs as papers were only momentarily held in front of the audience for a few seconds.

I managed to grab two quick photos of religious display design paperwork before the meeting started, despite Knickerbocker’s secretary Dionne Craig rudely grabbing the paperwork from under my camera lens once she saw me photographing it, right after News 12 was allowed to photograph same, so one shot is a bit blurry but you can see the display image nonetheless. As previously mentioned, one reads “Happy HumanLight Reason Compassion Hope” and the other reads “Peace.” The Peace sign appears to indicate it will be of wood or wood color and is NOT small but 7 feet wide.

The vote was 2-1, First Selectman Matthew Knickerbocker and Selectman Paul Szatkowski were YES votes and Selectman Richard Straiton a NO vote, to approve all 5 displays, saying he voted that way last time and wanted to keep that same no vote on the 5 displays now.

Straiton’s poignant comment talked about remembering 40 years ago, saying, “I’m a native of the town so I’ve been here 72 years and around the 40 year mark was when the Creche went on that green there, I remember it well [referring to the Nativity] because my dad used to decorate the tree for the town.”

Other issues discussed by the selectmen showed the board’s disregard for tradition and compassion about anything most residents hold dear, such as considering a suggestion that they said Parks and Recreation made, asking that all the displays, including the Nativity, be installed the Saturday AFTER the “WinterFest” celebration, which occurs on the day after Thanksgiving, thus having no Nativity for the Christmastime celebration. They said Parks and Recreation stated they wanted a substantial area on the square left clear for people to gather. The selectmen eventually decided upon the week before Thanksgiving for installation, after discussion between selectmen.

The selectmen claim that Parks and Recreation said that the displays are a safety hazard for the event that draws many people, but these are the FIVE displays THE SELECTMEN approved for THAT location in THEIR layout.

It also appears that they are NOT following the 1/3 rule they made previously, upon suggestion of the Religious Holiday Display Committee, to only use 1/3 of the triangle for displays so it makes room for people to gather. It seems they have the displays layout spread throughout the triangle instead. This is not what the display committee had in mind.

Also discussed, only by the selectmen, was moving the Christmas tree lighting ceremony to the municipal lawn, thus separating it from the Nativity because religious displays cannot go on the municipal lawn. This involves the purchase of a new tree, the selectmen said, so they decided against it because they do not have funds or enough time to do it this year, they said. “If we can move the tree lighting to say, the gazebo, that wouldn’t be necessary,” Knickerbocker said, about delaying the installation of displays past Nov.29th.

So once again, separating the Christmas tree from the Nativity and other displays, forgetting about sentimentality of attachment to the tree that os already there, and creating more havoc in what was once a lovely gathering of all faiths in the square, seems to be what is in store.

They already split Santa away from the ceremony, now he is in the municipal center which basically breaks up the crowd in P.T. Barnum Square to go chase Santa. That used to be the highlight of the night and amazing to watch all the children in awe of Santa’s arrival. NOW they are claiming it is “too dangerous” to pull the fire trucks near the crowd! (Just a suggestion: don’t pull the fire truck all the way to the triangle. Santa can then walk to the triangle from School Street intersection. Problem solved.)

WORST was when KNICKERBOCKER REFUSED TO REVEAL THE NAMES OF APPLICANTS OR RELIGIOUS AFFILIATION OF DISPLAY as we previously mentioned. What’s all the secrecy about? This is SO unacceptable.

NOT very transparent and this secrecy has to stop. The public has a right to know all information BEFORE items are approved and installed, and the right to their public comment being ADDRESSED.

View more photos of the meeting below: