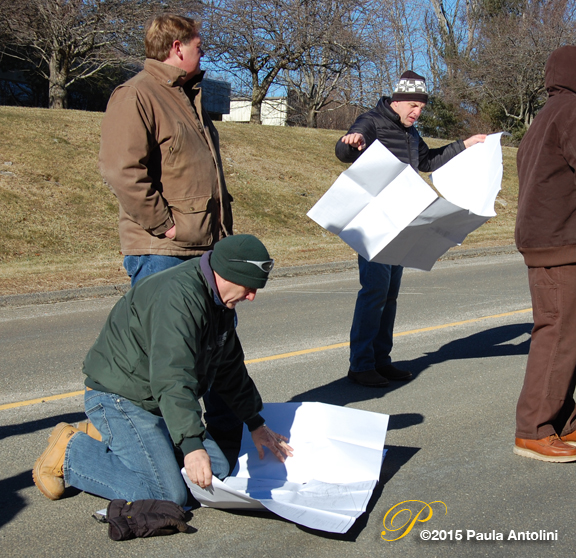 Nonetheless, there was a small group of individuals who attended the site walk, mostly the Bethel Planning & Zoning Commission (P&Z), Bethel Land Use – Inland Wetlands Department, the applicant B. Shawn McLaughlin’s son and daughter, attorney, engineer, and some Bethel residents.

After the group toured the exterior of the applicant’s present business, Mono-crete Step Co. of CT LLC, the engineer for the applicant, Mike Bizzoco, gave a brief description of the crematorium location. He pointed to an orange marker by the curb as the driveway entrance and stating that the building is set back 80 feet from the road. He also stated that the building would be 47 feet from the property’s northern border which has another industrial building close by on the adjacent property. Bizzoco said he does not know what the distance is between those two buildings (between the proposed crematorium building and the other building on the adjacent property to the north) because he “did not measure that.” When asked if he knew what the regulations were for minimum distance between buildings, he said there were “no regulations.”

Bethel’s Land Use Director, Steve Palmer, asked the small crowd, after Bizzoco’s summary, “Does anyone have any other questions?” Some questions were answered, but there were no questions allowed from the public, as per the P&Z.

On the site walk I observed a large beautiful body of water behind the Mono-Crete Step Company’s building, which is the Sympaug Pond. This Bethel body of water, more like the size of a large lake than a pond, also connects with other water sources to the south, which goes into Redding and Danbury. Will these, and all the aquifers in and surrounding the park, along with air and soil, be effected negatively by emissions from the proposed crematorium? Will an impact study be commissioned to determine that? 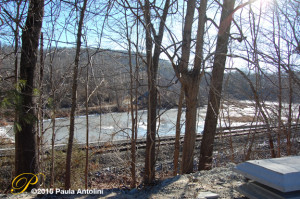 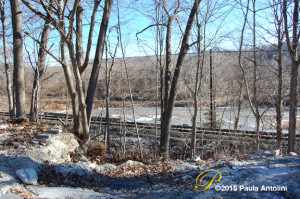 During the site walk the engineer Bizzoco also referred to tall and long retaining walls on several sides of the building structure, as also shown on the building plans. One wall was as much as 13 feet in height. One has to wonder what the final visual will be for that, or effect on drainage or other issues, etc.. As it stands now, the location of the site for the crematorium building is a steep grade, so much needs to be done to follow the building plans shown. Bizzoco talked about “cutting into” the property. 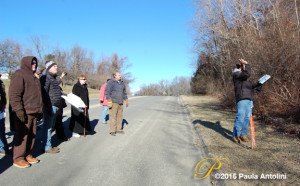 Recently at the December 29, 2015 Special Town Meeting a handful of business owners voted to strip Bethel’s Economic Development Commission (EDC) of all power and also the park rules expired on January 15, 2015,. So now the park has no rules and no one to oversee the park as the EDC had been successfully doing for 30 years without incident. The meeting was held on the Monday between Christmas and New Year’s weeks, and perhaps most residents were not aware of the meeting it seemed, by the low turnout. The final vote was NO 28 to YES 26, to not extend the EDC tenure by 10 years, which also stripped the EDC of power.

In an article dated January 18, 2015, in the News Times entitled, “Expired Rules Change Business Park Outlook” by Dirk Perrefort, Bethel’s Economic Development Commission (EDC) Chairman Mike Boyle is quoted as saying, “Without the rules and regulations in place, we no longer have any authority over the park,” and “It’s now the town’s responsibility. Of course, we’ll continue to serve as a conduit to the town and tell them what’s needed, but we have no authority to get it done.”

More importantly, Perrefort writes, “He [Boyle] added that a crematorium is not a good use for the park, saying negotiations with a company interested in building a 25,000-square-foot warehouse in the park stopped when the crematorium use was approved.” (This refers to when the text amendment was approved by the P&Z, which changed the park rules to allow a crematorium in certain parts of Bethel. There is still a second phase, which is happening right now, where the applicant has applied for a site/building permit and also a permit to use the building as a crematorium.)

Perhaps Bethel residents should be very concerned about the amount of vacancies in this park. The high number of buildings presently up for sale or lease are very disconcerting. The fact that a business decided not to locate to the park when it heard about the crematorium, is very worrisome. Is this the beginning of the end for Bethel’s Clarke Business Park? Will this also have a negative effect on home values?

Residents will have a chance to voice their opposition to the crematorium at the next scheduled meeting of the Planning and Zoning Commission (P&Z), coming up very shortly, next Tuesday, January 27, 2015, 7:00 p.m., in the Denis J. Riordan meeting Room D. 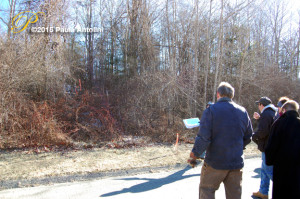 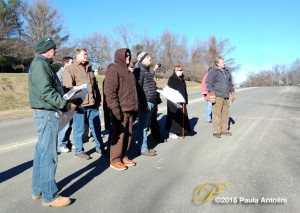 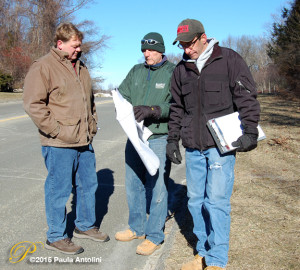 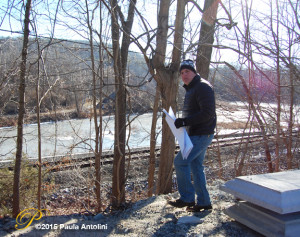 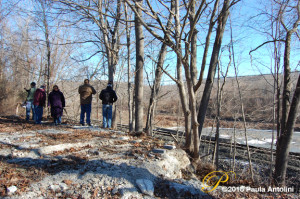 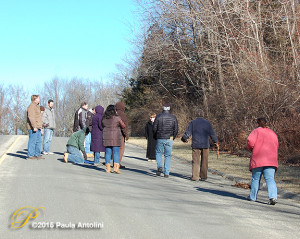 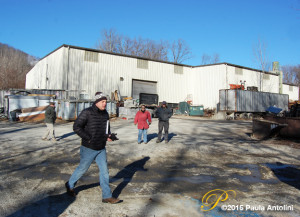 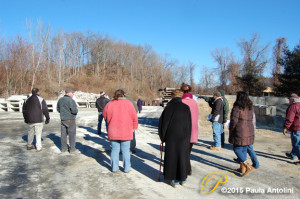 Photo captions starting from photo after the video:

Photo 1 and 2 shows the views of Sympaug Pond which is directly behind the Mono-crete Step Co. on the eastern border of their property.

Photo 3 shows the group listening to the applicant’s engineer, Mike Bizzoco, describe the property and plans.

Photos 4 and 5 show a view of the driveway placement, marked with an orange ribbon and also orange paint on brush.

Photos 6 and 7 show part of the group in attendance.

Photo 8 shows Steve Palmer with a view of the Sympaug Pond to his right.

Photo 9 shows part of the group viewing the Sympaug Pond.

Photo 11 shows the rear of the Mono-crete Step Co. building.

Photo 12 shows the northern part of the rear of the Mono-crete Step Co. property, and left of center, in the distance, you can see the rear of the steep grade (hill) where the proposed crematorium would be located (highest point on property).

Photo above the video shows individuals looking at plans.