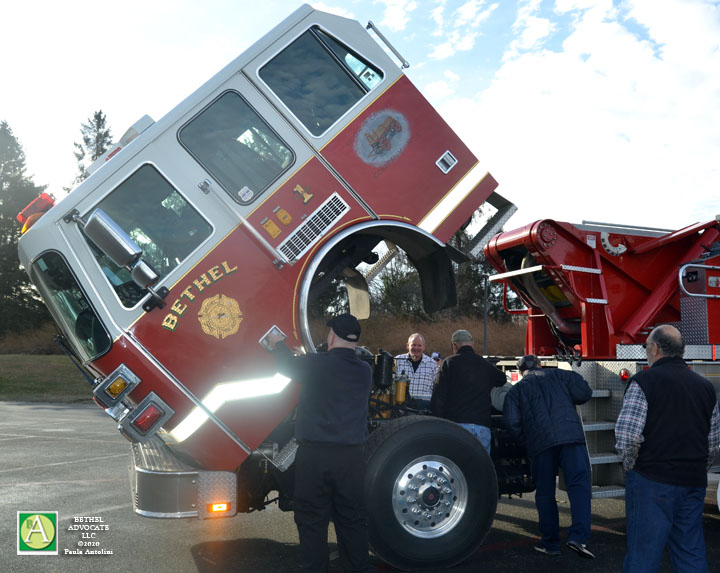 Is First Selectman Knickerbocker Accusing the Bethel Fire Dept. of Untruths Regarding the Aerial Truck Replacement Request, Now Likely to Be Repairs Done Only, on 42-Year-Old Ladder and 11-Year-Old Chassis?

A meeting of the Fire Apparatus Committee (FAC) took place on July 1, 2020, where the committee members continued to discuss the decision of the Bethel Aerial Ladder Truck repair or replacement for the Bethel Fire Department on South Street.

At the meeting First Selectman Matthew Knickerbocker heavily questioned the committee about repair records, then stated, “I think the Selectmen have to have some conversations about this. You know, we were told some very interesting things throughout this process. We were told that the hydraulics were shot … I remember at one point somebody said the guy who designed the hydraulics had died and therefore it could not be repaired. There’s a lot of things the Selectmen have to sift though on this.”

Knickerbocker then stated, “We’ve been without a truck in service, and had to rely on mutual aid, for many months, and I think there has to be some very serious conversations about how to move forward, how to insure public safety, and how to insure that we’re working together as partners and a team, in an atmosphere of mutual trust.”

In actuality, it is ten months since that official October 2019 meeting, where the fire department request took place, but questions from the Bethel Advocate, at that time, were not addressed when we asked the First Selectman why this was not an urgent matter, because lives were at risk. The timeline is especially important since a new truck takes at least a year to manufacture, as stated by fire department officials.

The fire department had indicated it had problems with that fire apparatus for several years and it became unreliable and unsafe, but nothing was done by the town to improve matters, it appears.

Originally, ten months ago, the fire department had requested total replacement for the aerial ladder truck in October 2019, due to its age and other factors, giving the fire department years of problems and compromising safety. However they were hitting roadblocks from the Bethel Board of Selectmen (BOS) that were unnecessarily complicating and delaying the process further, repeatedly asking them for additional extensive reports after they had already given them much detailed information.

Despite several Board of Selectman meetings occurring regarding this topic, the last BOS meeting occurring on October 15, 2019, in which the Bethel fire department presented details of this problem at length, and in minute detail regarding cost and replacement factors for a new replacement truck after extensive research. Bethel Advocate witnessed that extensive presentation first hand. The situation still dragged on for ten more months.

The Bethel Fire Department officials gave a complete presentation at the October 2019 Board of Selectman meeting detailing why it was not recommended that the 11-year-old chassis and 42-year-old ladder be refurbished, and it needed total replacement with a new vehicle, to meet the present safety codes.

The town has been at risk for several years, fire department officials said, with the only ladder truck being improperly or non-working, and it is being driven to fire calls because it has equipment on it to be used (despite the non-working ladder) but must pull to the side of the road to allow mutual aid ladder trucks to come to the scene instead, fire department officials said. Both the extension ladder and chassis continue to have numerous repair problems, and now the ladder is not working at all.

The town needs to rely on mutual aid during fire calls, adding precious minutes on to rescues by having to wait for other fire department ladder trucks to arrive to the scene.

The FD research included reasons why repairs or upgrades to the present vehicle, or buying used vehicles (which are rare to find and likely to have problematic histories of repairs themselves) are not cost effective or repairs are impossible to achieve due to new safety standards or difficulty in finding parts or even service centers willing to do the work.

Improperly working equipment could also malfunction while volunteer fire fighters are on their way to a scene, thus causing unnecessary injury or death to them or others in a traffic accident, or in related accidents at the scene if, for example, ladders do not work properly or a truck is not stabilized according to present standards, to stop it from toppling over, or to stop a ladder from crushing the truck cab or the side of the truck if not working properly when extended in that direction. “The truck never got any of those updates,” said Chief Engineer Bill Cadella.

Cadella referred to the National Fire Protection Association (NFPA) standards that are supposed to be adhered to, to which some of the current equipment does not confirm. Cadella said anything that is not compliant has to get updated, items on the vehicle such as “computers, the entire electrical system has to have the new multiplex system to operate everything electronic, the vehicle’s onboard computer, that’s the brain of the truck, this truck doesn’t have the newest version of that so that has to get updated, anything power-train related that’s not compliant to current standards has to get updated, so by the time you’re done with that project you’ve basically replaced everything but the walls of your cab and the frame rails and your motor.” Cadella said, at the January BOS meeting, the last time they looked into that it was $750,000 from Sutphen, and would take a year to do the project and that, “They (Sutphen) really did not want to take on that project.” It eventually was about $1.4 to 1.7 million to do a total replacement.

It also appears that even if a solution is approved by the BOS it would still be a year before a replacement is in place. So this means residents may remain at risk even longer, for at least another year, while a new truck is manufactured. Also, having to depend on mutual aid for a ladder truck to arrive from another town could add a precious ten minutes of delay to a call, Chief Engineer Bill Cadella said at the Oct. 15th BOS meeting.

The ad-hoc Fire Apparatus Committee,appointed by the BOS, consisted of members as follows: Chairman Richard Thode, Peter Valenti, Ralph Nathanson, Robert Dibble and Fred Ingram. They, along with several members of Bethel Fire & EMS, did a personal inspection of the present aerial ladder truck on January 11, 2020.

The committee inspected the existing Aerial Fire Apparatus at the Volunteer Fire Department and then took the truck to the Bethel High School parking lot to get better access to the truck and do a more thorough inspection. View photos and video in the link.

The committee subsequently had meetings once a month, and on February 5, 2020 requested that a letter be sent to manufacturer Sutphen for more information. They then voted to hold a Special Meeting on February 19.

The FAC Special Meeting occurred on February 20 and the committee decided to have a representative from Sutphen come to Bethel and inspect the truck. Sutphen would provide an inspection of the existing fire apparatus, give a detailed status of the truck, provide the existing service contract for the truck and provide recommendations. This cost the town $1400 plus travel expenses.

The March 11, 2020 meeting was cancelled (no reason given) and the scheduled April 1, 2020 and May 6, 2020 meetings show no record of cancellation or meetings ever taking place, but it could have been due to the COVID-19 situation of setting up online meetings etc., Bethel Fire Department Chief Scott Murphy said, when we spoke to him today.

The next meeting occurred on June 3, 2020 and after a review of the report from Sutphen Corporation, it was decided that the
fire truck be sent to Shipmann’s, an authorized Sutphen dealer, for necessary repairs, on the report that Sutphen technician did along with the work order, purchase order and detail of work from the recent repairs done at Gowans & Knight. Vote was unanimous.

At the July 1, 2020 FAC meeting, after a review of report from Sutphen Corporation, Richard Thode informed the committee that the third party testing and aerial test had been completed and Sutphen had re-certified the Aerial Ladder Truck. View full report HERE (below meeting minutes).

We contacted Chief Scott Murphy of the Bethel Fire & EMS fire department, for his input on this situation, and he said, “no comment at this time.”

The next meeting of the Fire Apparatus Committee is scheduled for August 5, 2020, where they are supposed to present official documents with exact figures for repair. The next Board of Selectman meeting is July 21, then August 4 and 18, so it could be the end of August before any final decision is made by the BOS on the aerial ladder truck.

Ultimately after the Bethel Board of Selectmen receive the official recommendations from the Fire Apparatus Committee, that will be entered into the record at Knickerbocker’s request, the BOS will make the final decision on the aerial ladder truck, whether to approve repairs or total replacement of the vehicle. Repairs for the 42-year-old ladder on the 11-year-old truck are estimated at about $11,000 right now, before the final figures are in. It appears as if they are heading for repairs unless there are any other developments.

Editor Note: There may be a conflict of interest or double standard happening with this issue, check back for more reports, we are presently investigating.