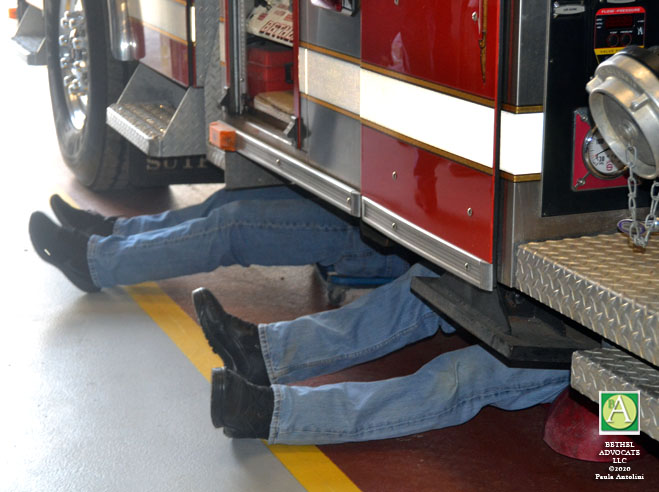 On Saturday, January 11, 2020 the members of the Town of Bethel “Fire Apparatus Committee” met at the Bethel Fire & EMS Fire Department located at 36 South Street, Bethel, CT, at 9:00 a.m., to begin their inspection of the aerial tower truck. They will make recommendations about a new truck purchase or not, ultimately then decided upon by the Bethel Board of Selectmen.

This meeting included a thorough inspection of the truck as members crawled underneath, around, on top of and inside the aerial tower truck to inspect the equipment.

They continued the inspection of the truck at Bethel High School’s upper parking lot where, after driving the truck to the BHS location and putting the stabilizers in place, they raised, lowered, extended and retracted the ladder and also moved it from side to side so they could observe the equipment’s defects or problem areas in action. Some members of the committee rode up and down in the bucket and evaluated it further from that vantage point as other members inspected the hydraulics and other areas, as they were operating. The truck cab cover was raised to gain better access to the areas to be observed.

The charge of the committee is to make recommendations to the Board of Selectmen about the purchase of a replacement aerial tower truck. This is the only ladder truck between the two Bethel fire departments and the present one is in improperly-working condition. It is only driven to fire calls but ladder not used, because they need the other equipment on the truck, equipment that does not fit in other vehicles. Mutual aid must be called if a ladder truck is needed on the scene. This adds another precious ten minutes or more onto a fire call.

We spoke to committee Chairman Richard Thode, who said the committee already decided not to recommend purchase of the Bedford Hills used aerial tower truck, that was suggested after being discussed at a previous Board of Selectmen meeting, after the Fire Apparatus Committee then further discussed and evaluated it.

Chairman Thode is a Bethel resident for 25 years and said he is a semi-member of Stony Hill fire department and is presently the Chief of the Bridgeport Connecticut Fire Department for 33 years. Other committee members have extensive fire department experience also, from various departments and towns.

Thode said, “We’re going to take what we saw today, we’re in the process of reviewing the last five inspection reports, maintenance records, and actual specs from when they did the refurb. of the apparatus. We’ll put all that information together and when we have our next regular meeting we’ll discuss everything we found both today and in the readings.“

No special Fire Apparatus Committee meetings have been scheduled yet but they regularly meet the first Wednesday of the month which will be February 5, 2020.