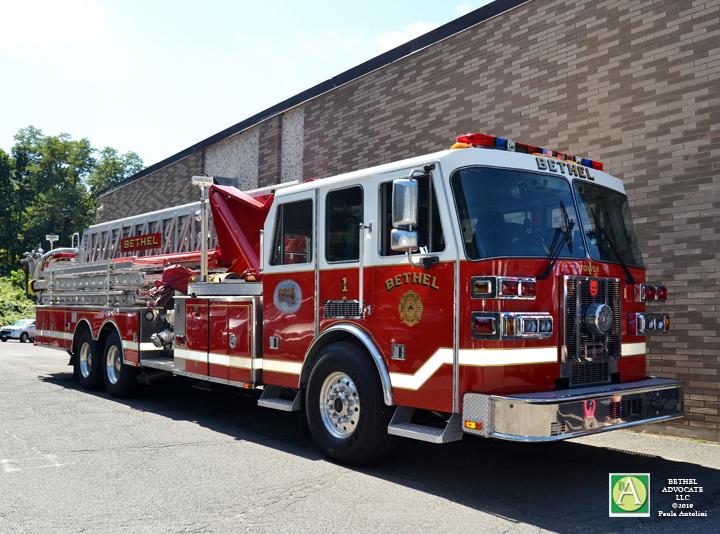 Tonight is a Bethel Board of Selectman (BOS) SPECIAL MEETING that will include discussion of the replacement of a non-working aerial tower ladder truck for Bethel Fire & EMS. The BOS SPECIAL MEETING is at 6:00p.m. and a BOS regular meeting to follow at 7:00p.m., in Room A of the CJH Municipal Center, 1 School Street, Bethel, CT.

The town is at risk with the only ladder truck being improperly or non-working for years now, and it is being driven to fire calls because it has equipment on it to be used (despite the non-working ladder) but must pull to the side of the road to allow mutual aid ladder trucks to come to the scene instead, fire department officials said. The Bethel fire department extension ladder is 42 years old, resting on a chassis that is 11 years old, and both continue to have numerous repair problems, and now the ladder is not working at all.

Presently the Bethel Fire & EMS fire department is urging the Board of Selectmen (BOS) to remedy this situation of an improperly working extremely aged aerial tower truck that the FD has been struggling with for years, but they are hitting roadblocks from the BOS that are unnecessarily complicating and delaying the process further.

Despite several Board of Selectman meetings occurring recently regarding this topic, the last BOS meeting occurring on October 15, 2019, in which the Bethel fire department presented details of this problem at length, and in minute detail regarding cost and replacement factors for a new replacement truck after extensive research, the situation still drags on, and continues in tonight’s meeting, January 7, 2020.

The FD research included reasons why repairs or upgrades to the present vehicle, or buying used vehicles (which are rare to find and likely to have problematic histories of repairs themselves) are not cost effective or repairs are impossible to achieve due to new safety standards or difficulty in finding parts or even service centers willing to do the work.

Improperly working equipment could also malfunction while volunteer fire fighters are on their way to a scene, thus causing unnecessary injury or death to them or others in a traffic accident, or in related accidents at the scene if, for example, ladders do not work properly or a truck is not stabilized according to present standards, to stop it from toppling over, or to stop a ladder from crushing the truck cab or the side of the truck if not working properly when extended in that direction. “The truck never got any of those updates,” said Chief Engineer Bill Cadella.

Cadella referred to the National Fire Protection Association (NFPA) standards that are supposed to be adhered to, to which some of the current equipment does not confirm. Cadella said anything that is not compliant has to get updated, items on the vehicle such as “computers, the entire electrical system has to have the new multiplex system to operate everything electronic, the vehicle’s onboard computer, that’s the brain of the truck, this truck doesn’t have the newest version of that so that has to get updated, anything power-train related that’s not compliant to current standards has to get updated, so by the time you’re done with that project you’ve basically replaced everything but the walls of your cab and the frame rails and your motor.” Cadella said the last time they looked into that it was $750,000 from Sutphen, and would take a year to do the project and that, “They (Sutphen) really did not want to take on that project.”

It also appears that even if a solution is approved by the BOS it would still be a year before a replacement is in place. So this means residents may remain at risk even longer, for at least another year, while a new truck is manufactured. Also, having to depend on mutual aid for a ladder truck to arrive from another town could add a precious ten minutes of delay to a call, Chief Engineer Bill Cadella said at the Oct. 15th BOS meeting.

According to the 6PM BOS SPECIAL MEETING agenda (view below) the BOS will consider setting up an ad- hoc committee for the purchase of fire engine, thus delaying the ladder truck purchase even more?

It is important to attend tonight’s BOS meeting. Public input will be allowed at the 6pm special meeting only. Let your voice be heard.