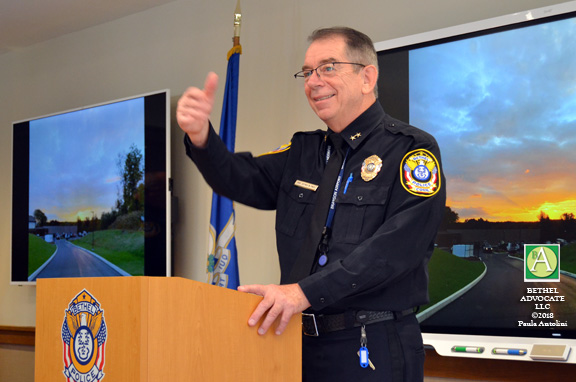 Photo: Bethel Police Chief Jeffrey Finch gives a thumbs up during his speech at the dedication of the new Bethel Police Station on Saturday, November 10, 2018.

Chilly temperatures and even a few snowflakes in the air did not deter residents from attending the Dedication Celebration of the New Bethel Police Station on Saturday, November 10, 2018, at 12 Judd Avenue in Bethel, CT.  The flow of visitors was constant during the 12 noon to 4:00pm timeframe of the event, and approximately 400-500 people were in attendance, the Bethel Police Department indicated.

There was no ribbon cutting ceremony or fanfare, but instead, a fitting small-town quiet celebration in the new and spacious meeting room, a few speeches and thanks, with a buffet filled with a treat of delicious apple cider donuts and apple cider drinks donated by the local farm, Blue Jay Orchards, as indicated by Captain Pugner.  The room was packed, standing room only.

As visitors entered the meeting room a slide show was running on three large monitors in the front of the room, showing photos of the groundbreaking and the building in progress as it was being built.

Chief Finch said that the new police station project, “Was not simple, there was a lot of questions and confrontation sometimes, about how to do this or what to do here, cost, and many other issues.” Chief Finch gave particular thanks to the present Board of Selectman, “Who fostered this, and passed this on, and made it happen,” he said.  First Selectman Matt Knickerbocker and Selectman Richard Straiton were present but Selectman Paul Szatkowski could not make it, Knickerbocker said.

Chief Finch said he’d give a tour of the old building if anyone wanted to see how bad it was, then First Selectman Knickerbocker added, “OSHA actually closed part of that building, you can’t even go in there.  That’s how badly we needed this to be done.”  OSHA is the Occupational Safety and Health Administration, an agency of the US government under the Department of Labor with the responsibility of ensuring safety at work and a healthful work environment.

First Selectman Knickerbocker said, “It’s interesting that he said he’s been here for 20 years,” referring to Chief Finch, “I’ve joked for years that it takes 20 years to build anything in the public sector, whether it’s a school, renovation, from the time somebody says officially in a meeting, ‘Hey we gotta do something about this,’ 20 years later we’re in it.”  Knickerbocker looked at his watch and said, “So I would say we’re right on time. That’s just the way it goes.”

First Selectman Knickerbocker thanked numerous people in his speech, who he said “were instrumental and really helped us along the way.” Among them were, “Rich Straiton, my colleague from the Board of Selectman and Selectman Szatkowski who couldn’t join us today but I want to recognize him too,” Knickerbocker said. (Please view video on link below to hear all names.)

Knickerbocker thanked Captain Pugner and said, “He was in charge of logistics and a lot of the details, he’s done a great job on this.”

Knickerbocker thanked Chief Finch and said, “Chief Finch is an outstanding leader and anybody that knows leadership knows that a good leader has to provide examples for their employees, the men and women that report to them, provide mentorship, and insure the quality of the service being provided. But the other thing is that a good leader has to turn around and fight for their employees oftentimes. So I can tell you that 15 years ago, when I, at that time, was Chair of the Board of Education, Chief Finch came to me and the Superintendent of Schools and said, ‘We would really like it if we could put a police station right next to the high school. Do you have any objections to that?’ And of course we said no, we think that’s a really great idea.”

“So here we are, years and years later, and I can tell you that when I took office on December 7, 2009, on December 9th the Chief came to see me.  I bet you can guess what that was,” said Knickerbocker.

“Chief I want to commend you for carrying the torch and making sure that your men and women have this great facility,” Knickerbocker said. “And last but not least, thank you to our community.”

“Through the trials and tribulations I’ve said to people, every single project, and this is true of the public sector in general… every single project has had problems, it’s had compromises to be worked through, this one had a couple of sticky ones, but our community through everything, through all of it, came together and did the right thing,”  Knickerbocker said. “Thank you for that. I really appreciate it.”

View video below to hear speeches by Chief Finch, First Selectman Knickerbocker (includes others he thanked) and Captain Pugner.

Bethel Police were also raffling off a Lego Police Department toy donated by the Bethel Police Benevolent Association. Winner is yet to be announced.

Most individuals took the tour of the two levels of the building after the initial ceremony, and well worth it, there is a lot to see. (There were no photos permitted in the interior of the building except in the meeting room and lobby.)

The building is beautiful, bright and light, a tan color scheme with touches of blue, mahogany-color furniture in larger offices, large windows in most of the rooms with beautiful woodsy views off some, and quite a few conference rooms to serve their needs.  The building appears to be well planned regarding flow and security and has numerous modern amenities including well-organized computer stations, numerous large screen monitors for surveillance, several kitchens, bathrooms, and different rooms entirely for each category of officers to do each facet of their work to keep a community safe.  The dispatcher station included an extra tall cupola ceiling lined in windows allowing much light flow, with a spectacular extra wide stainless steel modern fan to top it off.

The evidence room has an interesting system by which police officers insert the evidence into built-in lockers along one wall, which are open on the other side for another worker to retrieve the materials. Our guide was Sergeant Bob Durkin, who also pointed out the “only typewriter in the building” in that same room, which they are required to use to fill out a certain carbon-papered multi-page form, because that is what is required for this particular form, he said, even in this day of digital record keeping. The Forensics room is only accessed by a digital key code by one person, Durkin said.

The prison cells are larger than the old ones and are extremely well lit and have thick glass paneled sliding doors with metal frames. We were told the lights never dim in the cells. The prison cells are monitored from another room on a large screen and there are separate quarters for men and woman prisoners. They monitor the cells only when prisoners are occupying them, Durkin said.

The prisoner processing room has a method by which they can immediately identify a person just by fingerprints, if they are in a main computer system, if he/she refuses to give identification. There are special small enclosed rooms where a prisoner would stand to be photographed through a glass window, against the required grey background, Durkin said.

Locker rooms are vast, with double-door-fronts on lockers with enough room to hang clothing as in a regular closet, on a rod, with a huge drawer underneath each to store more items. Shower facilities are greatly improved over the old building too of course. Durkin said the number of lockers was planned for expansion, so there are a few more lockers than they are using at the moment.

The records room has a window to the front lobby for easy access to individuals making requests for records. The filing system is metal shelving units on tracks that easily move with the crank of a wheel on the ends of the cases, making filing space more compact when the shelving units close up against one another. Durkin said the police had no problem transferring all their files, with plenty of space left over for future use.

There was so much more to see, a tour is definitely recommended.  Anyone who missed the tour can call the police station and make arrangements to see the new facility, said Captain Pugner.

VIEW more photos of the event below: 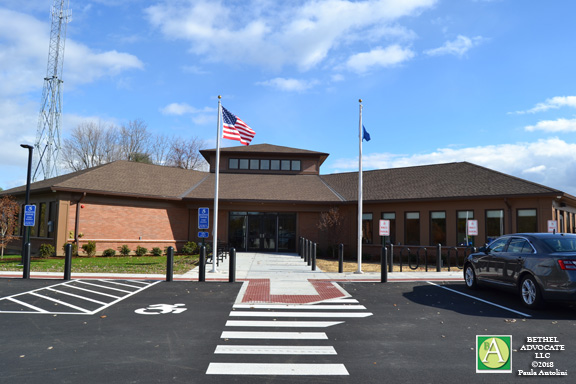 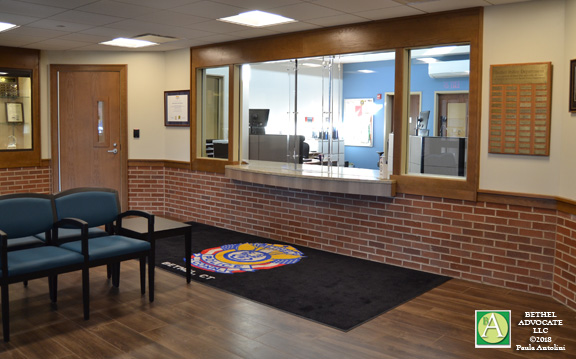 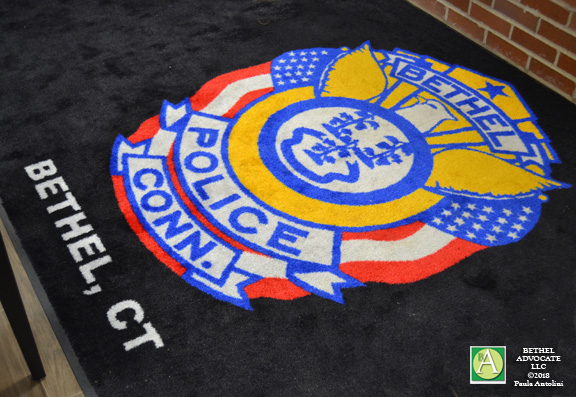 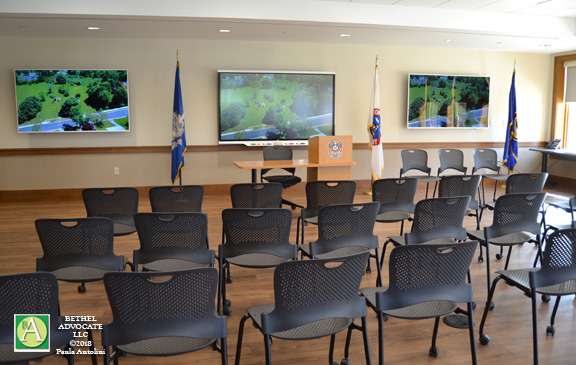 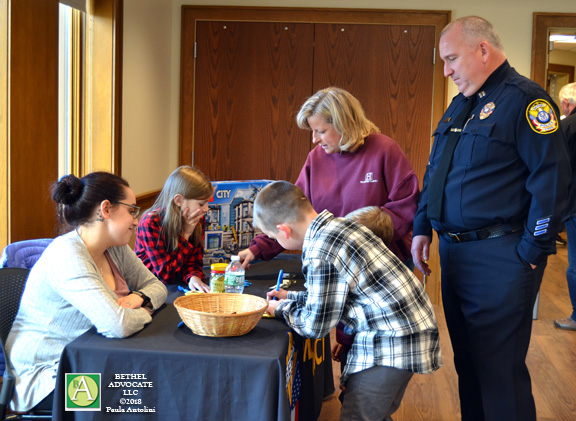 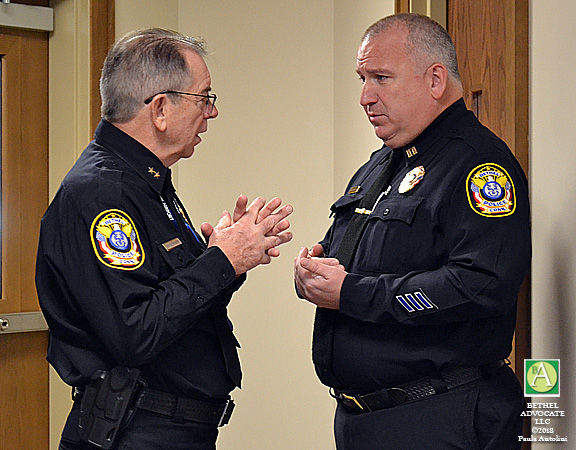 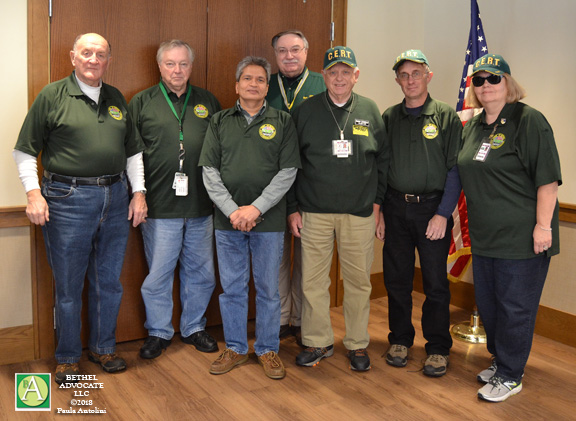 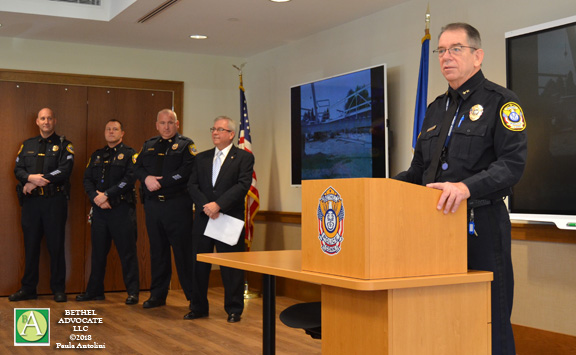 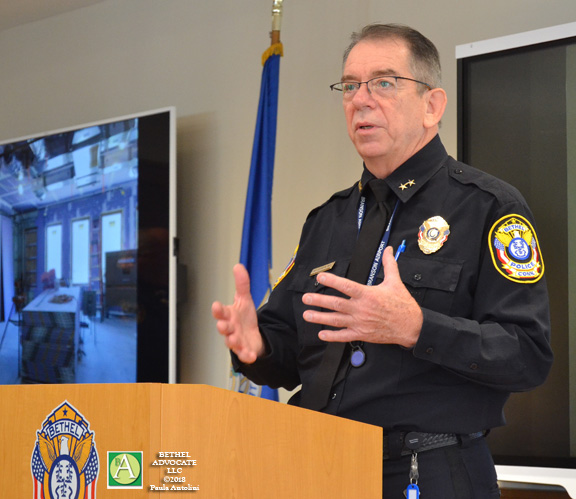 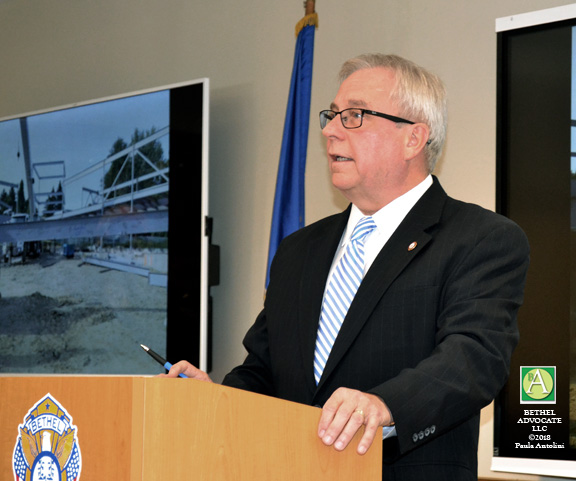 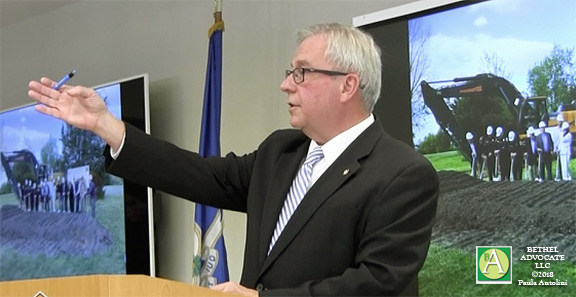 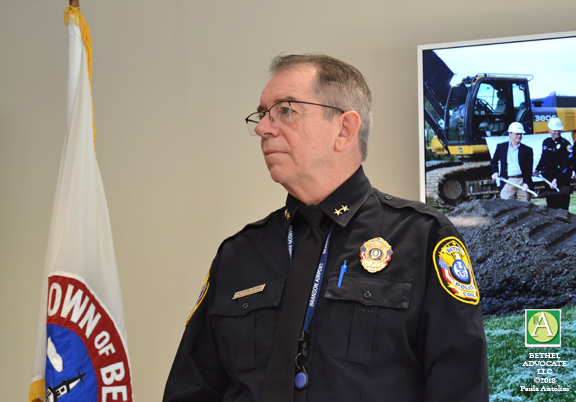 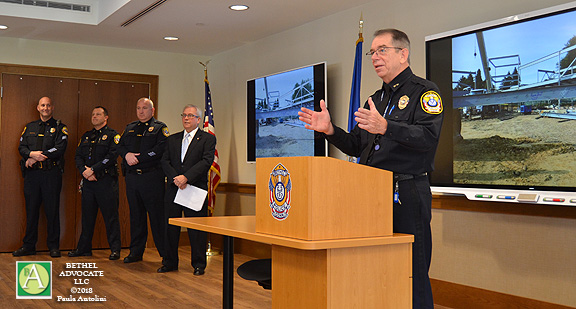 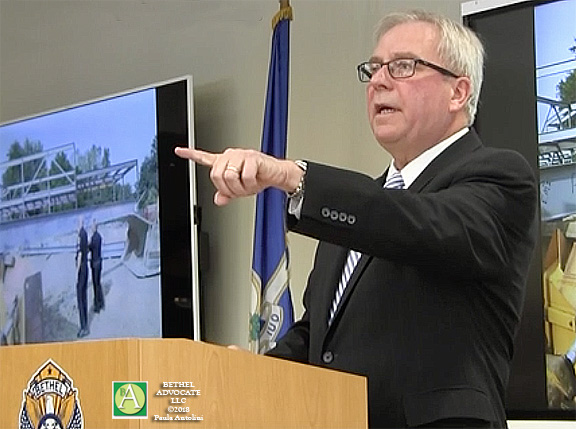 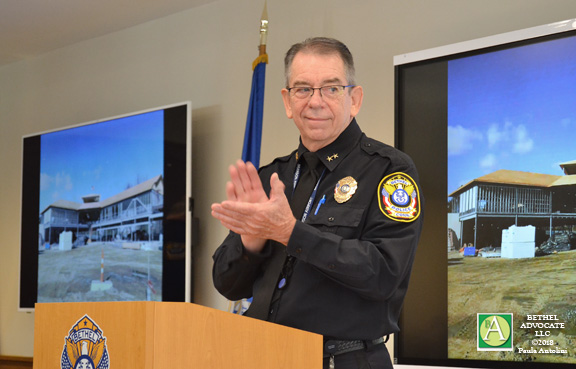 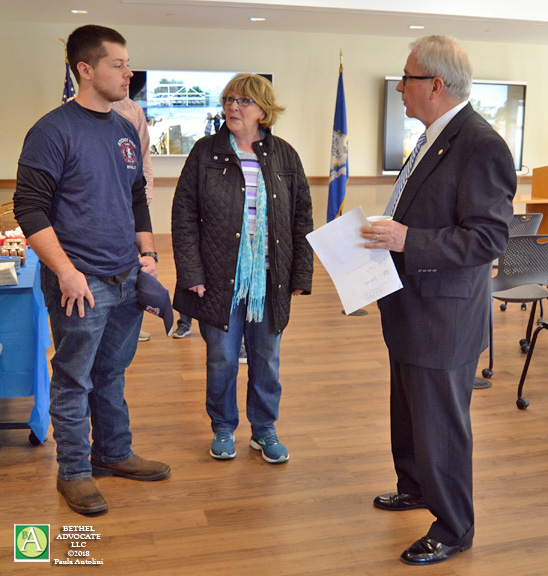 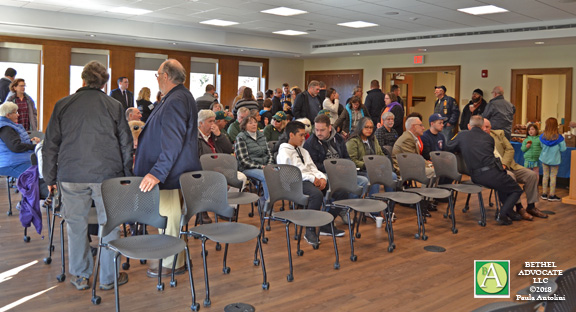 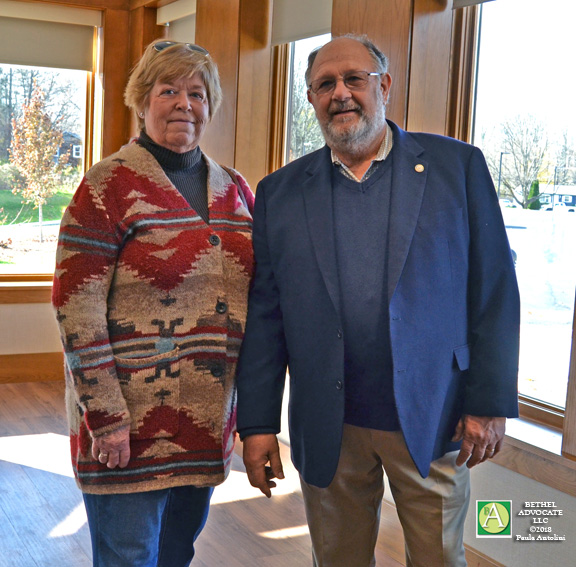 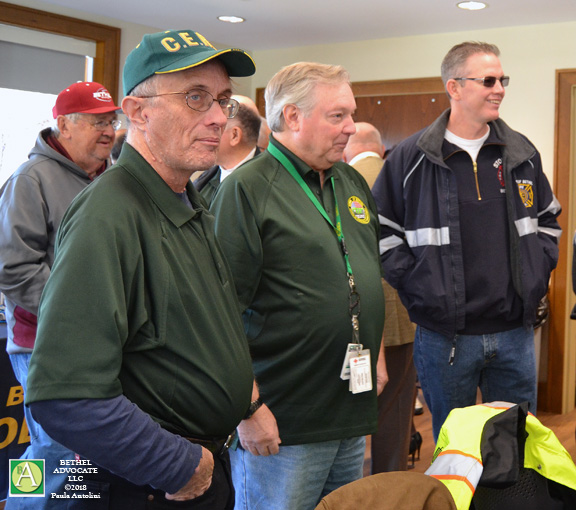 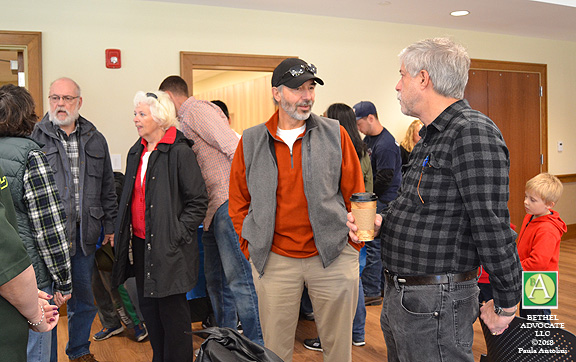 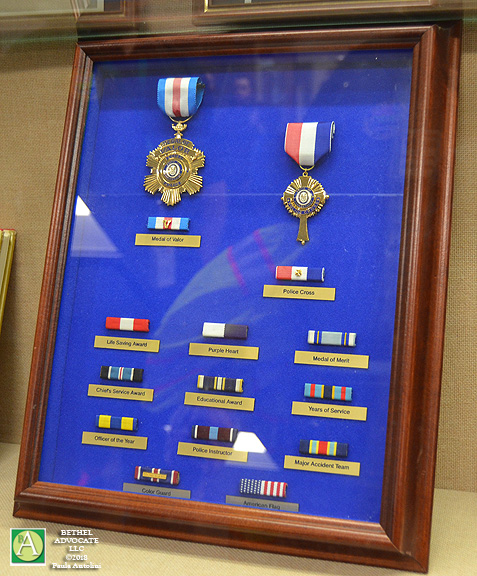 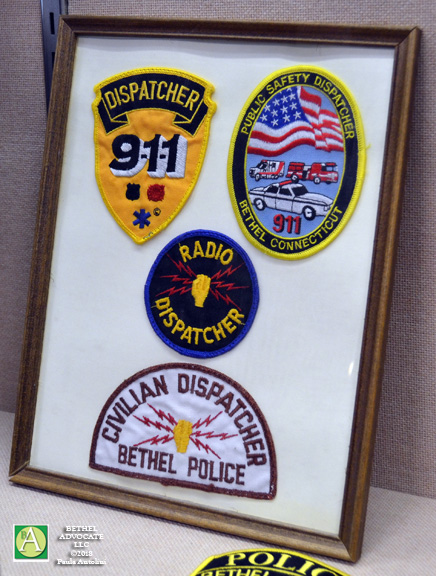 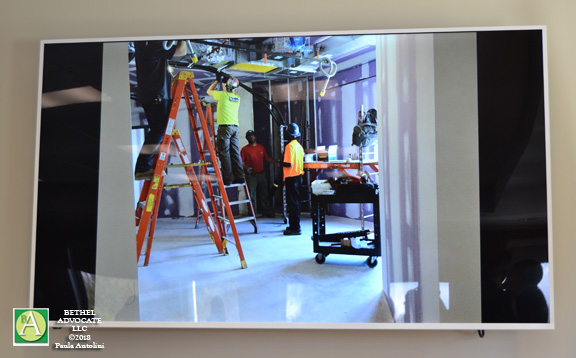 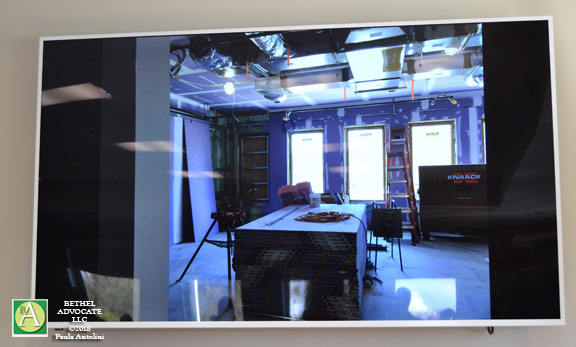