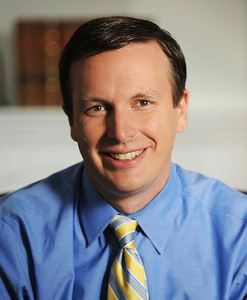 *****
Murphy: “The president’s authority under Article II of the Constitution is not limitless.”

But in evaluating our options in taking on ISIS, we need to be clear eyed about the scope of the effort required to eliminate the threat they pose. A broader fight against ISIS will likely require a sustained, long term military campaign across the Middle East region. Without defined objectives and means, the United States could end up marching down another slippery slope of war, entangling us in a bloody sectarian conflict without end. Our protracted engagements in Iraq and Afghanistan have demonstrated that U.S. military force alone is insufficient to build broken nations and solve centuries old sectarian disputes.

I support the Administration’s initial efforts to protect our personnel and to provide urgent humanitarian assistance to the Iraqi people, but the president’s authority under Article II of the Constitution is not limitless. I also appreciate the fact that President Obama recognizes the constitutional role of Congress in foreign policy, demonstrated most recently by his call last summer for congressional authorization of military action in Syria.

I do not believe any of the existing war authorizations give constitutional permission to the Administration to fight a new long term war against ISIS. Thus, if the president anticipates military involvement beyond our original limited objectives in Iraq or Syria, the Administration needs to come to Congress to outline its military objectives and seek specific authorization before we enter into a new war in the Middle East.