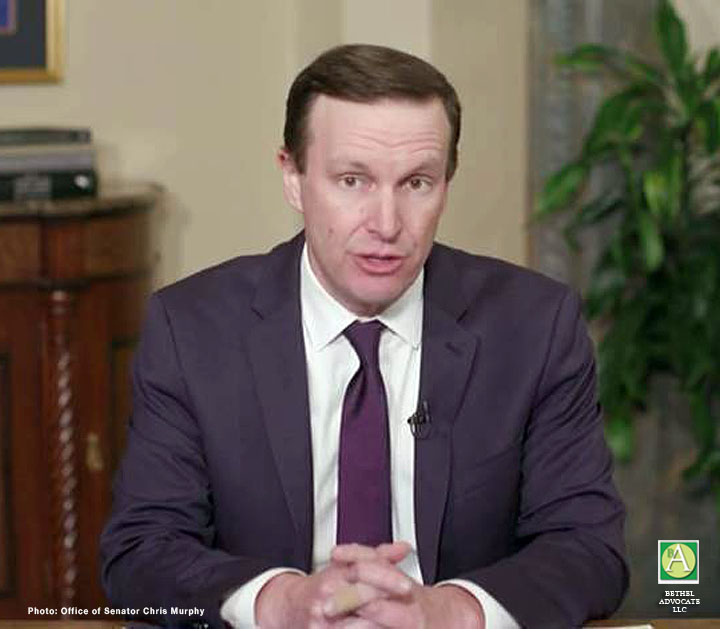 Sen. Murphy / Impeachment Trial: ‘Today was devestating for proponents of the President’s case’

WASHINGTON—After the conclusion of the first day of the House managers arguments in the impeachment trial of President Donald Trump, U.S. Senator Chris Murphy (D-Conn.) held a Facebook Live to answer questions from people in Connecticut and share his impressions of today’s proceedings. In an effort to increase transparency, Murphy plans to do this regularly throughout the trial.

“Today, I think, was devastating for proponents of the president’s case. The House managers walked through a detailed tick-tock, from the point of which this corruption scheme began in the spring of [last] year, to literally the last 30 days – in which the president and Rudy Giuliani have continued to try to dig up dirt on the president’s political rivals,” said Murphy.

Murphy continued, “Obviously, this storyline that was unveiled today is very personal to me. I’ve been involved in U.S.-Ukraine policy for the better part of the last decade. I was the first senator to raise concerns in the spring about Rudy Giuliani’s attempts to try to get the new Zelensky government to do the president’s political bidding. And my trip to Ukraine in the fall was entered into evidence today by the House managers – along with the letters that both I and Senator Johnson sent to the House impeachment inquiry committee detailing our visit and the discussions that we had with President Zelensky about the suspension of aid and what I believed to be an illegal attempt by the president to get Zelensky to interfere in the election.”

Murphy added on the need to not let the impeachment trial completely distract the American people from President Trump’s reckless Iran policy, “…[T]he Trump administration still will not give us information regarding the justification for the killing of Qassem Soleimani. We now know that there were far more people injured than we had previously thought. And we still have no briefings from the administration on these claims of threats against U.S. embassies. And so we have to be able to walk and chew gum at the same time here.”

Earlier this week, Murphy blasted Senate Republicans for rejecting amendments to ensure additional witnesses and documents be included as trial evidence before arguments were heard, and did another Facebook Live on the first day of procedural votes for the trial. Earlier today, Murphy joined Senate Democratic Leader Chuck Schumer and Senate Democrats at a press conference before arguments started.