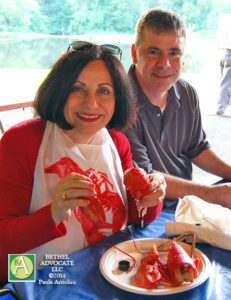 Dinner was served buffet-style in the park gazebo that has a beautiful serene view of the pond. Steamy-hot lobster was flowing non-stop and was delicious! More lobsters were available and many chose a second helping. The feast included many other delicacies and beverages, beer was on tap, and desserts topped off the great meal.

CT State Senator Toni Boucher (seeking a fourth term in the state senate) arrived later, at the end of many of her engagements that day, but as always, was a friendly presence, receiving many hugs upon arrival. Chairman Will Duff was just getting a chance to eat his lobster dinner after being barbecue chef and emcee earlier, so Boucher and Duff dined together at a picnic table in the gazebo as others mingled too.

Many thanks to Pat Rist, Kitty Grant, Wendy Dowling, Bob Legnard, John Lennon and all others who helped make this event a success.