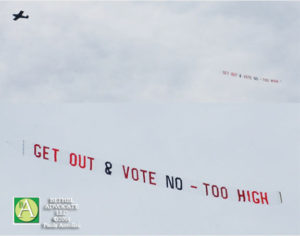 Who Hired an Airplane to Fly a “VOTE NO- TOO HIGH” Banner Over Bethel This Morning?

Further investigation about the “mysterious” airplane-with-banner flying over Bethel this morning is as follows:

I spoke to Mike Safranek, assistant administrator of the Danbury, CT Airport, and he said the airplane did NOT fly out of Danbury Airport this morning. He did confirm what company it was though, Simmons Aviation Services, and that the airplane is a PIPER PA25, number 6079Z, flying out of Pawcatuck, CT.

This is a fixed-wing single-engine airplane manufactured in 1960 registered to Simmons Aviation Services LLC, dba CT SKY SIGNS, and who operates from the Westerly Airport and specializes in servicing the Connecticut and Rhode Island shoreline.

I spoke to a Mr. Simmons, of Simmons Aviation Services at 353 Greenhaven Road, Pawcatuck, CT, who identified himself as the “office manager” he said, who also indicated he “cannot divulge any information” regarding who hired the airplane and banner.

Their website lists the one-time price of “one-time banner flown locally” at $465.00 plus tax. It also indicates “Each pick-up has a required $25.00 airport use fee, which is not included in the rates above. Possible fuel surcharges may apply depending upon the fluctuation of costs due to current events.”  Since this company is out of Pawcatuck, CT, I am not sure if that fee would be increased to fly over Bethel, CT, but obviously someone has an extra $465-plus to spend, to get their voter information to the public today!

I will post more information as it becomes available.

An airplane was seen flying over Bethel this morning, flying a banner that reads, “GET OUT & VOTE NO – TOO HIGH.”

Airplane was photographed from the Berry School and officials in the parking lot said the airplane has been circling overhead in Bethel this morning, over and over.

So who is the mystery person or organization that paid for this airplane?  Does anyone know?