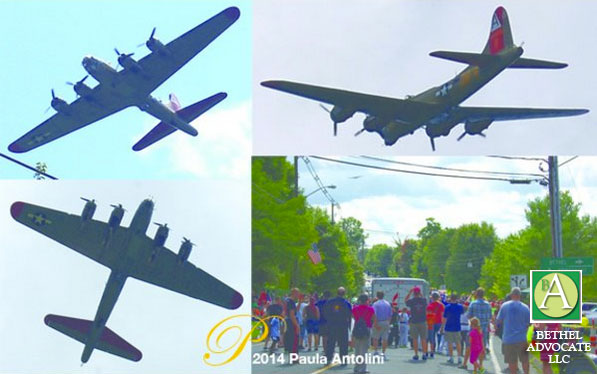 Police or Local Airports Have No Information on the Mystery Airplane. 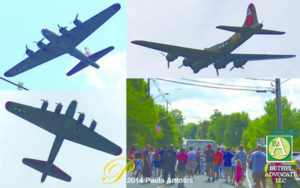 With the parade theme of “Write On, Newtown,” honoring many Newtown authors and illustrators, the Newtown 53rd Annual Labor Day Parade took place today, September 1, 2014. But the parade had a “twist in the plot,” just as all the writers being honored today would probably love.

That twist was that something odd happened today about mid-way through the parade. Someone flew a rather large airplane over the parade route, several times, at a very low altitude, and no one seemed to know anything about it, including the Newtown Police. So who was it? It was enough to make parade watchers look up and comment, mainly because of the large size and low position.

The airplane was coming from the direction of the intersection of Sugar Street and Route 25 and heading towards the flagpole on Church Hill Road, flying directly over the parade on Route 25. It circled and repeated this several times. There were no banners attached, but the airplane was so low that some airplane markings could be seen from the ground, as shown in the photos. Do you care to take a guess as to what it was?

The Newtown Police did not know anything about this airplane. Sergeant Aaron Bahamonde was contacted and he did not know of any airplane that was hired and said, “We didn’t get any calls on it, that’s for sure.”

A spokesman from the control tower of the Danbury Municipal Airport was contacted. He did not want to be identified, but did agree to give this quote, “The control tower knew of no aircraft at the time.”

A spokesman from the security department of the local Sikorsky Aircraft in Stratford, CT, who did not want to be identified, indicated they had not scheduled any airplanes over Newtown today.

After closely inspecting the airplane markings in the photos and a little more research, I thought this could be a vintage WWII era B-17 aircraft, possibly part of the “Wings of Freedom Tour,” OR there are many companies who offer rides on vintage aircraft for a fee too.

As it turns out, according to Bob Collings, of the Collings Foundation, this airplane-fly-over (over the Newtown Labor Day Parade today) was donated by a local Newtown citizen, who prefers to remain anonymous. It is in fact representing the “Wings of Freedom Tour” which brings historic aviation to local communities in honor of our WWII veterans. Today‘s airplane flew out of Farmingdale on Long Island.

Collings confirmed that the vintage WWII authentically restored aircraft seen over Newtown was a B-17G, named the “909.” He said it was considered a lucky aircraft because it flew 140 missions and no one was ever killed. The number 909 is the last three numbers of the registration number, as some airplanes were named that way.

It certainly was a thrilling sight for the parade watchers to see today!

117 thoughts on “Large Airplane Flies Low Over Newtown Labor Day Parade Route Today. Who Was It?”