Exciting news!  At last night’s Bethel Board of Selectman meeting it was announced that a proposal from a brewery company was selected to lease the Old Bethel Train Station, located between Front Street and Depot Place, and the decision was approved by the board. 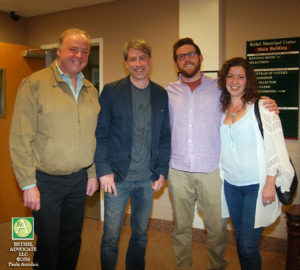 Exciting news!  At last night’s Bethel Board of Selectman (BOS) meeting it was announced that a proposal from a brewery company was selected to lease the Old Bethel Train Station, located between Front Street and Depot Place, and the recommendation from the “New” Old Train Station Committee was approved by the BOS.  The name of the company selected is “Broken Symmetry Gastro Brewery.”  The next step of the process is a public meeting where residents will be able to make comments.

There is about a 6-12 month process to get approvals and permits and renovations done.  The owners said it is a longer process and involves a lot of “red tape” because beer is a controlled substance and involves approvals from the federal government. The brewery-restaurant plans on serving home-brewed beer made on the premises, along with a selection of food to compliment the beer. 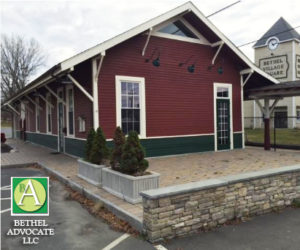 Photo above: Current photo of the Old Bethel Train Station. 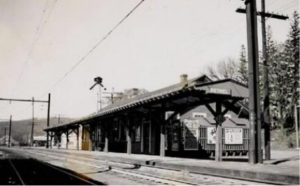 Photo above: Old photo of he Old Bethel Train Station.

Tassone is the owner of Bethel’s “La Zingara,” an intimate farm-to-table Italian restaurant, serving food that takes inspiration from northern Italy.  They also cater.  Tassone also owns the Rooftop “ECCO” Eatery and Bar, described as a “casual bistro” upstairs. Both establishments are located at 8 P. T. Barnum Square in Bethel, Ct. since 2002.  Both restaurants use fresh produce cultivated from part of a 126-acre farm.  Tassone obviously has extensive knowledge in food and restaurant service.  She described the new brewery as having “European beer.”

Paul Mannion is the owner of the well-known popular local business, “The Green Grunion,” a roaming food truck, and he has also worked at La Zingara, he said.  “The Green Grunion” is “primarily a San Diego style Burrito truck that provides the fine people of the greater Danbury area, and beyond, a TRUE burrito done the San Diego way … right!  As well as some late night goodness.”  They serve a selection of burritos that contain a combination of meats, veggies, beans and other ingredients, with names like The Cali, Carnitas, Chorizo, Pollo, Veggie, Black Bean, and Pinto Bean.  He said they plan on serving similar food at the brewery.

Mannion comes from three generations of Bethel families. His father, Jim Mannion, was a state representative in the 70’s and the first Democrat to represent Brookfield/Bethel, Mannion said.  He also had law offices on Greenwood Avenue and Grand Street.

Christopher Sanzini is the third brewery partner, from Danbury and Brookfield.  He has a physics background and loves food and cooking.  He is a self-taught in making home-brewed beer and lovingly said, “In 1996 I got into ‘real’ beer, the disease.”  Sanzini said the new brewery would be cafe-style.  He spoke about the history of breweries in the area and said they were pleased to be part of it now.  He said breweries are one of the largest growing industries.  Their brewery will be “somewhere in between a nanno-and-micro-sized brewery,” Sanzini said. He added, “Beer is one of the oldest fermented beverages on the planet.”

The partners were very excited and pleased to have been chosen to lease the Old Bethel Train Station.  Mannion said, “We are excited for everyone involved in the area, not just for us.”

Sanzini said, “There is so much history in beer.  In the 1700’s colonies, beer pubs were the social network during the Revolutionary War.  It is just as it was years ago.”

All three partners then agreed, the new brewery will be the “real-time social media.”

Photo above: Bethel Board of Selectman meeting on April 19, 2016, where announcement was made about the brewery.

Mike Boyle, Chairman of the Bethel Economic Development Committee, and also a member of the “New” Old Train Station Committee, said the decision of whom to select was unanimous.  When Mr. Boyle made the announcement at the BOS meeting he said, “The Old Train Station Committee has received seven proposals, of which, we narrowed it down to four to invite presentations, and after much and careful consideration, of which Richie was also on the committee (motioned to Selectman Straiton) we recommend Symmetry Micro Brewery as the business we look to have approved by the Board of Selectmen for us to see if we can come back to you with a lease for the reasons both financial, and with our Bethel Forward plan, that was the business that made the most sense for a lease, to take it to the next step, to have the opportunity to secure a lease with this business.”  He added, “Right now we have a ten year lease with an option.” 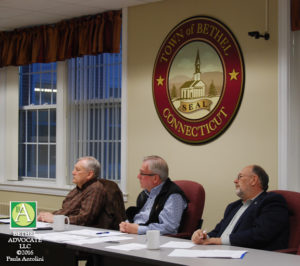 Photo above: Bethel Board of Selectman meeting on April 19, 2016, where announcement was made about the brewery.  Left to right: Selectman Paul Szatkowski, First Selectman Matthew Knickerbocker, Selectman Richard Straiton. 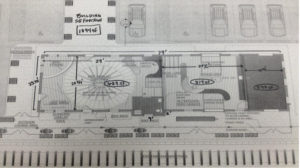 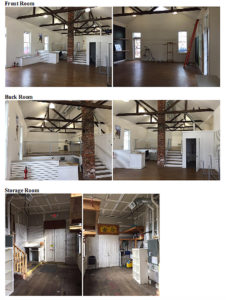 Above: Interior view of the Old Bethel Train Station (click on photos to view larger.) 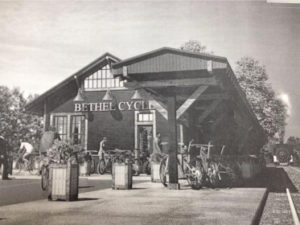 The Request for Proposal (RFP) described the Old Bethel Train Station as follows:
“The Old Train Station serves as a key location within the Town of Bethel, with a large number of parking spaces and surrounded by a variety of retail/specialty shops, personal and professional service providers and restaurants.
“The Old Train Station is a single story structure. The structure is approximately 23’ in width and 79’ in length. The structure is approximately 1,894 sq ft and consists of a front room (approx. 689 sq ft), a back room (approx. 819 sq ft), a storage room (approx. 297 sq ft), and a handicap accessible bathroom that includes a shower. The property also has a paver patio and a covered outdoor area.”

To be considered, prospective Lessees had to submit their response on or before 4:00 p.m. on March 3, 2016 to the Procurement Committee.
The committee carefully assessed the business plan and economic benefits that the business would provide to the downtown village district. The Town also considered the amount of potential revenue from the lease to help preserve the Old Train Station and the parcel of land surrounding it.
*****
The Request for Proposal had to contain the following information:
1) Proposed Lessee Entity Information – Identification of Proposed Lessee Entity
a. Name and Address of the Entity
b. History and relevant experience of the Entity and of the principal Individual(s) comprising the directors and/or officers of the entity, including résumés and other background information, not to exceed two pages per individual.
c. Corporate structure of the Entity submitting the proposal.
d. The main contact individual for the Entity’s submission.
2) Proposal Business Plan – A detailed and comprehensive narrative description of the intended commercial use, including a detailed business plan for operations for the term of
the lease and explaining how the proposed operations may be particularly appropriate to
the Station structure, its location and to the growth and enhancement of the Town of
Bethel.
3) Modifications – A conceptual plan for interior modifications to the Station building,
by the prospective Lessee, that may be necessary to bring the Old Train Station to
compliance with Building Department and Health Department regulations and with any
other regu latory requirements for the intended use, and an estimate of the costs of such
modifications. No exterior modifications are allowed due to the historic nature of the
structure, except upon formal review and acceptance by Planning & Zoning.
4) Timeline – A timeline of the project schedule, from the date of an Agreement signing
with the Town of Bethel to the date of project completion with significant milestones
noted along the timeline.
5) Lease Terms – The terms, duration and conditions of a proposed lease for the Old Train
Station by the prospective Lessee. Prospective Lessees are hereby given notice that a
lease of more than five (5) years duration or in the aggregate amount of $100,000.00 over
the term of the lease will require approval by a Town Meeting.
6) Financial Capabilities – The prospective Lessee’s financial condition to successfully
operate its proposed business in the location and to fulfill its obligations under its lease
with the Town.
7) All submissions must include a minimum of five (5) references that can attest to the experience and capacity of the submitting entity. Two (2) of the references must attest to the submitting entity’s financial capacity, including one financial reference that represents the principal bank or lender of the entity.
8) Any prospective Lessee must disclose any current or pending litigation involving its firm, its team, and/or its principals and their affiliates. All principals and members of the respondent’s team must provide confirmation that they are operating in good standing with the State of Connecticut and are not barred from doing business with any agency or subdivision of the United States Government or the State of Connecticut.
There were also insurance requirements, a Hold Harmless Agreement, a Submittal/Award Schedule, and more.
*****

The Town of Bethel first evaluated and scored each proposal using a rubric (similar to the one described below under “criteria”).  The Town of Bethel reserved the right to modify the rubric prior to conducting interviews with prospective lessees. The Town of Bethel was not obligated to pursue an Agreement with the highest scoring proposal.  The rubric was used to provide an objective analysis of the fundamental components of each proposal to the selection committee.  The Selection Committee made a recommendation to the Board of Selectmen following completion of the interview process.
*****

The criteria by which the Request for Proposals (RFP) were evaluated went by a scale of 3 to 0, with 3 = Exemplary, 2 = Adequate, 1 = Less Than Adequate, and 0 = Missing.   Total Score: (Max Score = 33).  Comments were also allowed to be noted.
Criteria was as follows:
•  Content Requirements – All Information in the RFP is Submitted
•  Proposed Commercial Use – Compatibility to the Plan of Conservation and Development
and the Needs of the Community
•  Economic Benefits to the Town of Bethel
•  Other Benefits to the Town of Bethel
•  Relevant Experience/Background of Proposer
•  Description of Necessary Modifications – Cost Estimates Included
•  Demonstrated Understanding of Responsibility of Lessee
•  Demonstrated Understanding of Responsibility of Town of Bethel
•  Potential Lessee’s Financial Capabilities
•  Lease Terms
•  References
###