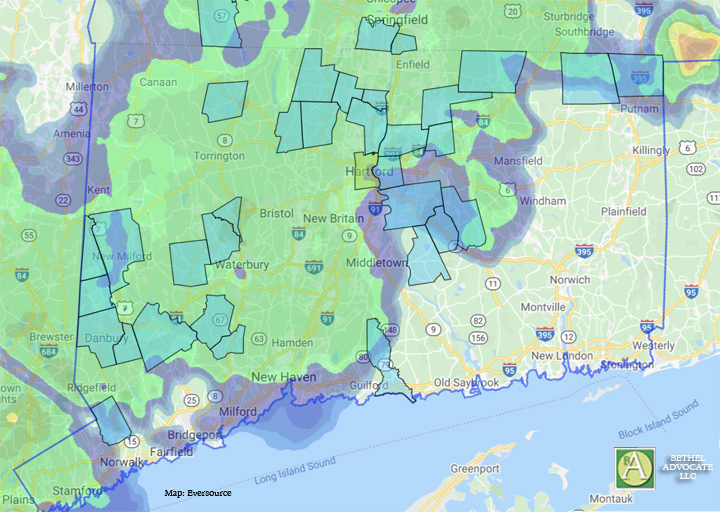 As storms arrived to our area, Eversource stated, “Strong thunderstorms are passing through the state. Stay away from any downed lines! Call us to report an outage 800-286-2000.”

Reports of outages in Connecticut total 1,546 customers at the present time. This includes fewer than 2 in Bethel Bethany, East Hampton, Ellington, Hebron, Oxford, Rocky Hill, Seymour, Sherman, Simsbury, Thomaston, Windsor and Woodstock, fewer than 3 in Glastonbury, New Milford, Stafford, Wilton and Woodbury, fewer than 4 in Windsor Locks, fewer than 5 in Granby, 69 in Canton, 83 in Danbury, 71 in East Granby, 91 in East Hartford, 269 in Greenwich, 765 in Hartford, 18 in Madison, 7 in Marlborough, 61 in New Fairfield, 5 in Newtown, 11 in South Windsor, and 21 in Winchester.

During storms, there are a number of electrical hazards you can encounter on the road. Remember to put your safety first when traveling during stormy weather.

You should be careful when traveling in any storm situation. Heavy rain, strong winds or wet snow are particularly adept at toppling trees, which can damage power equipment and create hazardous situations.

If you notice a power line in the road, keep your distance. There is no way to tell if the line is energized or not. Never drive near, under or over a downed power line. Call Eversource and stay away from the hazard until officials make the area safe for everyone.

Be especially cognizant of a fallen tree touching a power line. In this dangerous situation, power can travel through the tree and into anything the tree is touching, including the ground itself. Make sure to keep your distance and call Eversource.

If you lose power during a storm, there are several safety hazards to keep in mind.

Please know, Eversource is always working hard to restore your power during an outage. However, you should prepare to be without power for an extended period of time.
One preemptive step you can take is packing a storm safety kit with things like flashlights and extra batteries, a first aid kit, water and some snacks. Also, make sure you memorize or write down a set of emergency numbers, in case you are unable to charge your cell phone, and check the batteries in your smoke detectors.

Our ‘Storm Safety Checklist‘ can help with other steps you can take before, during and after a storm to stay safe.

If you’re using a generator to power your house, be sure to use a properly installed, code approved transfer switch when you turn it on.

You can also plug your electrical devices directly into the generator. Only use heavy-duty, outdoor power cords, and remember to check for frays.

Forecast from the National Weather Service for Bethel, CT:

Showers and thunderstorms. Some of the storms could produce heavy rain. Steady temperature around 84. Southwest wind around 7 mph. Chance of precipitation is 80%. New rainfall amounts of less than a tenth of an inch, except higher amounts possible in thunderstorms.

Showers and thunderstorms before 3am, then a slight chance of showers. Some of the storms could produce heavy rain. Low around 68. Calm wind. Chance of precipitation is 80%. New rainfall amounts between a quarter and half of an inch possible.

A slight chance of showers, then a chance of showers and thunderstorms after 8am. Some of the storms could produce heavy rain. Mostly cloudy, with a high near 88. Calm wind becoming northwest around 6 mph in the morning. Chance of precipitation is 50%.

A 30 percent chance of showers and thunderstorms before midnight. Mostly cloudy, with a low around 66. Light and variable wind.

Mostly clear, with a low around 53.

A 30 percent chance of showers after 2pm. Partly sunny, with a high near 70.

A 40 percent chance of showers. Mostly cloudy, with a low around 57.

A 30 percent chance of showers before 2pm. Partly sunny, with a high near 75.

Partly cloudy, with a low around 55.

Mostly sunny, with a high near 75.

Partly cloudy, with a low around 56.

A 30 percent chance of showers. Partly sunny, with a high near 79.

A 30 percent chance of showers. Partly cloudy, with a low around 58.

A chance of showers. Partly sunny, with a high near 80.