Ginger Hanrahan, an accomplished artist, will be hosting an art benefit and memorial for her late husband, James P. Hanrahan, on Saturday, August 15, 2015 from 3-5pm at The Alexandria Room – Edmond Town Hall, 45 Main Street, Newtown, CT. 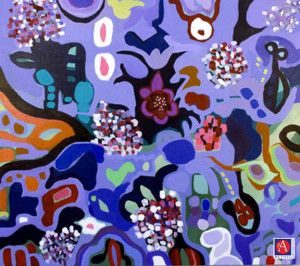 Ginger Hanrahan, an accomplished artist, will be hosting an art benefit and memorial for her late husband, James P. Hanrahan, on Saturday, August 15, 2015 from 3-5pm at The Alexandria Room – Edmond Town Hall, 45 Main Street, Newtown, CT. Ginger’s work will be featured and available for sale. A portion of the proceeds from the art benefit will be donated in Jim’s name to the Newtown Cultural Arts Commission and Bethel Arts.

Jim Hanrahan of 186 Walnut Hill Road, Bethel, CT, died suddenly on Friday, July 24, 2015. Jim was a lifelong Fairfield County resident and a great supporter of the arts. A graduate of Notre Dame University, Jim was a brilliant writer and athlete who specialized in distance running. He excelled in his career in marketing and corporate communications and crafted marketing messaging for Comp-U-Card, became a vice president at Sullivan & Mulvaney, a managing director at Earle Palmer Brown, and founded his own consultancy, where he wrote speeches for the office of the CEO of IBM, and later led their communications strategy initiatives. His love of the written word extended beyond business writing to his own creative works and his style of economical prose gave voice to the sharp clarity of a beautiful humanistic intelligence.

Ginger Hanrahan’s art celebrates the unseen, neglected and forgotten – such as derelict buildings or the world of our dreams. It is heavily influenced by the Pattern and Decoration Movement and by traditional handcrafts. It uses symbolic abstraction to advance a narrative, to tell the story of things seen out of the corner of the eye: the memories, monuments and random cultural signifiers and the mysterious shapes found in the woods or the junkyard. Ginger works in several different mediums using paint, fiber and paper depending upon the message she wishes to convey. She is adept at paint handling and is well versed in the techniques necessary for working with various types of fibers. Ginger received her MFA from Western Connecticut State University, has a MPH degree from Yale University and an undergraduate degree in Anthropology from the University of California at Santa Cruz. Her work has been shown in galleries and juried shows throughout the Northeast. Ginny was born in Neptune, New Jersey, raised in rural Bucks County, Pennsylvania, lived for many years in California and currently resides in Bethel, Connecticut. You can see some of Ginger’s work at www.gingerhanrahan.com

The art benefit and memorial are open to the public.