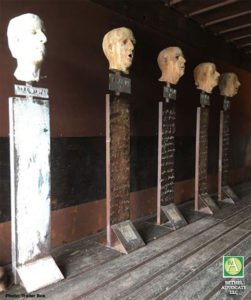 A new exhibit is now at the Trailer Box Gallery, sculpture from Juan Bordes.

The artist wrote, “I was born in Las Palmas, [Spain], and eight years later I wanted to be a sculptor; Although I also wanted to be a bishop, film director, puppeteer, surgeon and even architect. And now I realize that the only thing that interested me in all those professions was what they had as a sculptor.”  He said, “I think I could justify my sculpture as the sum of all my childhood vocations.” (Read full text below)

Born in 1948 in Las Palmas de Gran Canaria, Spain, Bordes began his studies in 1957 with scupture courses at the Lujan Perez Schoolin Las Palmas with Abrahan Cardenes.  In 1965 he entered the ETS of Architecture of Madrid, studied at the Moncloa School of Ceramicsin Madrid, and took drawing classes at Circulo de Bellas Artes in Madrid.

He began teaching in 1976 at ETSA in Madrid.  In 1986 Bordes received his Doctor’s degree with thesis, “Sculpture as element of composition in the building. It’s regulations in the Spanish French and Italian Tratadistica.” Directed by Juan Navarro Baldeweg, Extraordinary prize of the Polytechnic University of Madrid to the doctoral thesis.

In 1988 Bordes was Titular Professor of the Department of Architectural Composition ETSAM Corresponding Academician of the Royal Canarian Academy of Fine Arts of San Miquel Arcngel with the lesson: “They were always there … (The classic sculpture of the Ptado Museum in the light of modern sculpture)”.

His numerous exhibits and life’s work are listed below.

I think I could justify my sculpture as the sum of all my childhood vocations.

The work of a sculptor is his workshop. I had understood it since I visited the original reconstruction of Brancusi’s workshop in Paris in 1965. And also convinced that the figure is the most brief and intense text to catch the time I have invented them in order to self-construct, because I understand their bodies as a shroud of my ideas and intuitions.

The first space that welcomes them is my small studio, which turns into theater sometimes tragic, others comical or even indifferent. But working surrounded by my figures ends up creating me the complex of Pygmalion, which I bring back to become a photographer “voyeur” of the activities of my characters. Pagan altars, scenographies for stories without history, battles of defeated or theaters with puppets without head, are some of the snapshots of a photographic archive, which for more than 25 years I have done as a newspaper.

Nevertheless, I do not forget that the “bone” of the statue is the one that has constructed the history of the sculpture, leaving in the oblivion the rite of its installation. Which for more than 25 years I have done as a newspaper.

But this self-explanation has a prehistory: I was born in Las Palmas, and eight years later I wanted to be a sculptor; Although I also wanted to be a bishop, film director, puppeteer, surgeon and even architect. And now I realize that the only thing that interested me in all those professions was what they had as a sculptor. He interpreted them all as if a sculptor to the marrow had set himself to exercise each of them.

Probably the sculptor is a genetic inheritance, or being naive might just be predestination because my home was at the confluence of Berruguete street with the del Greco. That precocity was reinforced by my mother sending me to study with a local sculptor the technical principles of the trade. But his incentives were also decisive, and I never forget my first paraffin figure in the display of his affectionate treasures.

For reasons that I never knew but that I now appreciate, after only a year in the nursery of the Jesuits I was transferred to a singular mixed, atypical and non-religious school. At that stage, two of the characteristics that best define me: an infinite patience and an inclination for a certain sense of risk and limit.

And yet, the first childhood vocation I remember was to be a bishop. Today, I can not but embarrass him, but he does away with the reason why he pretended to do so, because he wanted to live in the Vatican.

But in the meantime I was passionate about building altars and surrounding with the greatest possible rite “the saints” that I myself modeled or carved. I was fascinated by the flowers, their colors and smells, which accompanied with the candles or very unusually with the incense. But the culmination was in Holy Week, and within it the Good Friday, with the mystery of the statues covered. The fall of the purple veil reproduced it again and again with all the theatricality of the world. That accompanied with the one of the candles or very extraordinarily with the incense.

Then came “The Ten Commandments,” and De Mille showed me a show whose fascination made me abjure my religion to embrace that of cinema. And with my brother Fernando, he built historic and colossal miniature cities to destroy them with catastrophes that we simulated filming. We also made drawn bands that fed a small projector. The film director has left my interest in photography, which makes my doubts in the workshop with a Mamilla, a Zeis, and other cameras coexist. There they are expectant to the day when chance arranges a theater of relationships that induce a few days of photographic reflection.

Of the puppeteer and the surgeon I have remained a heterodox method to make my figures, because I always build their bodies working only with the skin. Everything is a consequence of a particular way of modeling, using the sheet material (thermoplastic or wax). And like the ventriloquist, with one hand pressing from within the figure, I make speak by the force of the anatomy; And with the other, I iron from the outside with the will of the surgeon and the scalpel of my own history. The puppeteer came with an unexpected gift from Reyes, one of those that can make you change your life discovering a world you did not even suspect. And with several years of illusion I learned the life that comes from an inner hand. But the surgeon would come much later, on the edge of the university decision, because that summer I had the opportunity to attend several operations in the operating room of a charity hospital. Even today, I relive those visions through my obsessive passion as a collector of anatomy books.

Architecture came as a compromise between my plastic interests and my decision not to violate family authority. However I recognize that also influenced that first and disciplined infantile formation that anticipated to me something of which I would have offered the studies of Fine Arts. I remember that in that workshop the demands were never lowered for me, since I received the same indications and tasks as my adult companions. However, with the architect I have reinforced the will of the sculptor to be specific; Distancing myself from the choices of other sculptors who assume the responsibility of forecasting architecture. Perhaps this is a paragon that my unconscious has resolved in favor of sculpture. This is driven by the conviction of recognizing in sculpture its immensely economic capacity. I am fascinated to see in space spread so much energy sprouting from such a small nucleus of matter, compared to the waste of means that architecture has to perform to order the same space.

But my personality, somewhat schizoid, resolved from my doctoral thesis a certain agreement between these two formations. And with the title of “The sculpture as element of composition in the building”, I studied the historical dialogue that has made of the sculpture in the building a concert of two wills, that of the sculptor and the architect. The implementation of these conclusions have been possible through my collaborations with Oscar Tusquets.

In short, with this puzzle of interests I have related, I have only managed to construct contradictions and doubts, and what I continue to preserve is the childish curiosity that supported my searches and entanglements, but does not want to repeat any of the lessons learned.

1957-60. Sculpture courses at the Luján Perez School in Las Palmas with Abrahán Cárdenes.

1965. Entry into the ETS of Architecture of Madrid.  Studies at the Moncloa School of Ceramics in Madrid.  Drawing of the natural in the free classes of the Circulo de Bellas Artes in Madrid.

1972. Concludes the studies of Architecture.

1976. Starts teaching at ETSA in Madrid.

1986. Doctor’s degree with thesis: Sculpture as element of composition in the building. Its regulations in the Spanish, French and Italian Tratadística. Directed by Juan Navarro Baldeweg. Extraordinary prize of the Polytechnic University of Madrid to the doctoral thesis.

1988. Titular Professor of the Department of Architectural Composition ETSAM  Corresponding Academician of the Royal Canarian Academy of Fine Arts of San Miguel Arcángel with the lesson: They were always there … (The classic sculpture of the Prado Museum in the light of modern sculpture).

2006. Academician of the Royal Academy of Fine Arts of San Fernando with the speech “The childhood of the artist or the sources of the Nile”.

2010. Delegate of the National Calcography of the Royal Academy of Fine Arts of San Fernando.

2010 The toys of the avant-garde (advisor). Picasso Museum, Malaga.

1993. From the Volcano. Twenty Century Artist’s From the Canaries. IBD, Cultural Center (Washington, DC) .The Spanish Institute. (NY). / From the Volcano. Canarian Artists of the 20th Century. Museum of Contemporary Art Sofia Imber of Caracas, Venezuela.