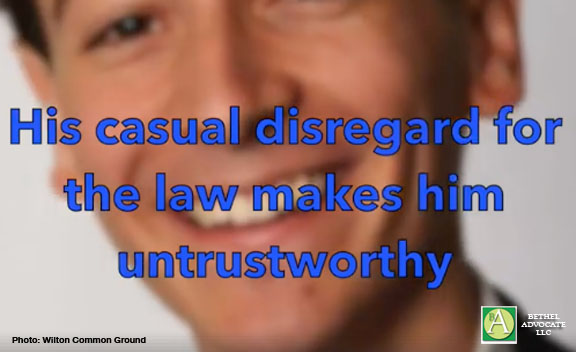 Where does Will Haskell really live? Wilton Common Ground Says He Could Be Guilty of Campaign Fraud

Wilton Common Ground, “a group of Wilton Citizens concerned about the coarsening of our public discourse that is threatening the character of our town, state, and country,” has posted more information about candidate Will Haskell, as follows:

Where does Will Haskell really live?

Not in his mother’s house in Westport which lies outside the 26th District.

He claims to live at New Canaan at 21 Burtis Avenue, a dilapidated commercial building. According the MLS, the apartment at that address has been rented since February 2018 for $1,100 per month.

But Will Haskell was still in college in February. Why would he take an apartment in New Canaan where he does not live or work and is 20 miles from his family? For that matter, who is paying his rent if he’s never held a job?

In filings to the Connecticut State Elections Enforcement Commission, Haskell reports payments of $1,125 per month to John Lynch, a consultant who also happens to live at 21 Burtis Avenue.

Who is John Lynch and sort of work does this consultant do? And how is it that his fee is exactly the same as the rent at 21 Burtis Avenue?

According to his SEEC filings it seems that Haskell and Lynch are living in the same apartment and paying rent disguised as consulting fees.

Alternatively, Haskell is living at home with his mother outside the 26th District and paying the rent at his fictitious address with campaign contributions.

Haskell moved into the 26th district in anticipation of challenging Toni Boucher, a Wilton resident for more than 20 years. His rent is being paid for by someone other than himself. That payment constitutes an illegal campaign contribution or expenditure.

Will Haskell is so young and inexperienced that ignorance of the law may actually explain this clear violation. To help him (and the local news media who seem unwilling to report this), here’s a refresher on basic campaign finance law:

[General Statutes § 9-607(g)(2)(L) and (4)], “No goods, services, funds or contributions received by any committee may be made available for the personal use of any candidate or individual. Expenditures for “personal use” include expenditures to defray normal living expenses for the candidate, the immediate family of the candidate, or any other individual (such as committee chairperson or treasurer). Examples of such expenditures include rent or mortgage payments for residential or business purposes, clothing, shoes, groceries, and personal subscriptions.”

“We are generally non-partisan, libertarian-leaning, and represent the traditional center of Wilton politics. We believe in free expression and reject the efforts of a vocal few to silence the respectful majority of our community.