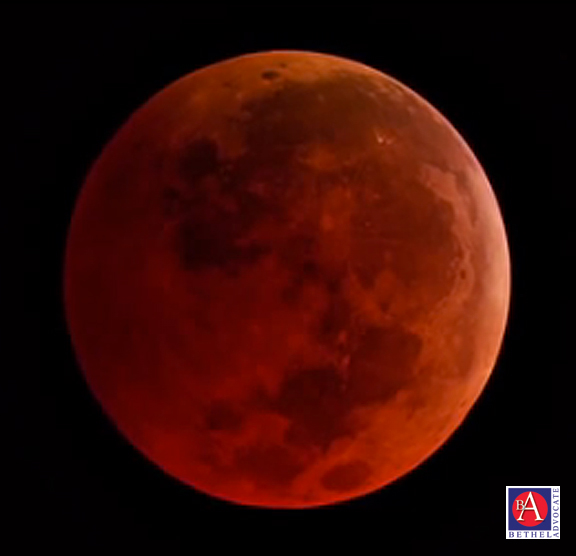 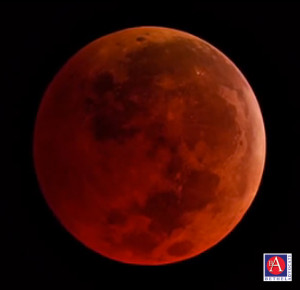 This Total Lunar Eclipse or “Blood Moon” is on April 4, 2015 and will be visible in most of North America, South America, Asia and parts of Australia. The Moon will be totally eclipsed (totality) for about 5 minutes. From beginning to end, it will last for 3 hours and 29 mins. This is the third eclipse in the 2014–2015 tetrad.

Where to see the eclipse

Regions seeing at least some parts of the eclipse: Much of Asia, Australia, Much of North America, Much of South America, Pacific, Atlantic, Indian Ocean, Arctic, Antarctica.

Is this eclipse visible in Bridgeport?

When the eclipse happens worldwide

Lunar eclipses look approximately the same all over the world and happen at the same time.The times displayed might be a minute or two off actual times.
*****

On April 4, 2015 a Total Lunar Eclipse will be visible from most of North America, South America, Asia and parts of Australia. Here are 10 facts you should know about this Eclipse.

2. It’s Part of a Lunar Tetrad

The April 4, 2015 Total Lunar Eclipse is the third in a series of four Total Lunar Eclipses called the lunar tetrad The first two eclipses of the tetrad took place on April 15, 2014 and October 8, 2014 The last eclipse will be on September 28, 2015

Notice something interesting about the dates? Each of the Lunar Eclipses in the tetrad occurs about 6 months apart and has 5 full Moons between them!

Phases of the Moon

Lunar tetrads can be rare in some centuries and can occur frequently in others. The 21st century will have eight lunar tetrads, the maximum number of lunar tetrads that can occur in a century. The last time this happened was in the 9th century!

The next lunar tetrad of the 21st century will start with the Total Lunar Eclipse on April 25, 2032

3. People in the U.S. Will Have Front Row Seats

Each of the eclipses in the tetrad is visible from all or many locations in the United States, weather permitting. People on the west coast of the U.S. will have some of the best views of the April 4, 2015 Total Lunar Eclipse. Some locations, however, may not be able to see the last stages of the Eclipse because they will happen after Moonset.

Moonrise and Moonset times in your city

The U.S. East Coast will be able to see only a Partial Lunar Eclipse since totality will take place after the Moon sets at these locations. Parts of Alaska and Hawaii on the other hand, will be treated to a striking eclipse of the Moon – from start to finish.

The eclipse will also be visible to people in Australia, New Zealand and Japan.

When will the Eclipse take place where you are?

Sunrise and sunset times in your city

5. It’s Being Called a Blood Moon

In recent years, the term Blood Moon has been frequently used to refer to Total Lunar Eclipses. Some sources suggest that the origin of the term in the context of the 2014-2015 lunar tetrad can be traced to Christian pastors Mark Blitz and John Hagee, who claim that the eclipses fulfill a Biblical prophecy of forthcoming difficult and trying times.

On the other hand, Blood Moon is not a scientific term used by astronomers. It is possible that the term came to describe Total Lunar Eclipses because of the reddish color the eclipsed Moon takes on during totality. This happens because of Rayleigh scattering, the same mechanism that causes colorful sunrises and sunsets and the sky to look blue.

Why are Total Lunar Eclipses red?

6. Despite Rumors the World Will Not End

The views of pastors Blitz and Hagee gathered attention in early 2014, because the eclipses in the tetrad coincide with important Jewish festivals. The eclipses in April 2014 and April 2015 occur at the same time as Passover while the October 2014 and September 2015 eclipses occur during the Feast of Tabernacles Some people took this coincidence as a sign of the end times.

Others have dismissed any apocalyptic significance of the tetrad. Data of past eclipses show that at least eight lunar tetrads have coincided with Jewish holidays since the First Century. Additionally, the Jewish Calendar is a lunar calendar and Passover always occurs around a Full Moon. And because a Total Lunar Eclipse can only occur on a Full Moon night it is very likely for an eclipse to take place on or near Passover.

The science behind Total Lunar Eclipses

In conclusion, scientists and astronomers have found no reason to believe that the current lunar tetrad is a sign of the world to end. Even mainstream religious organizations have debunked this claim, so don’t start hording end-of-the-world supplies just yet!

Doomsday prophecies that fizzled out

The whole Eclipse from start to finish will take 5 hours and 57 minutes. Due to the short totality, many sources are labelling the Eclipse as a Partial Lunar Eclipse.

This century’s longest totality during a Total Lunar Eclipse will take place on July 27, 2018 Totality will last for 1 hour 42 minutes.

9. You Won’t Need Protective Equipment to See the Eclipse

Lunar eclipses are some of the most spectacular and easy to view astronomical events. Unlike solar eclipses, which require specialized eye wear, a lunar eclipse can be viewed with the naked eye.

How to view a Lunar Eclipse

Take spectacular pictures of the Moon

On Saturday, April 4, much of the world will witness the third in a tightly packed series of four total lunar eclipses. The week’s event is the shortest of the four, with totality lasting less than five minutes, perfect for anyone with a limited attention span.

Lunar eclipses occur quite frequently, but many are the much less interesting penumbral or partial eclipses. Four total eclipses in sequence is unusual, although we will be seeing it more often over the next century. A minor industry has sprung up among those seeing mystical significance in that all four are visible from at least part of the United States, but so far signs of apocalypse are thin on the ground.

Saturday’s eclipse will begin at 9:01 Greenwich Mean Time, dimming its light but not yet turning it red. More dramatic effects will start an hour later when part of the moon moves into the umbral shadow. The total phase will be short because the moon will pass through the edge of the Earth’s shadow, not its center.

The brief total component of the eclipse will be visible from the western half of North America, eastern Asia and Australia. Anyone in South America or the eastern part of North America willing to drag themselves from their beds shortly before sunrise can see the lead-up, with some regions fortunate enough to view the partial phase as well. On the other hand, India and western China will see the moon rise as the eclipse is ending.

For the rest of the world, the Slooh Community Observatory will be offering a live feed from multiple sites where the eclipse can be seen.

The eclipse this September, completing the tetrad, will occur at almost exactly the opposite side of the Earth, visible from almost everywhere that will miss out on this one.