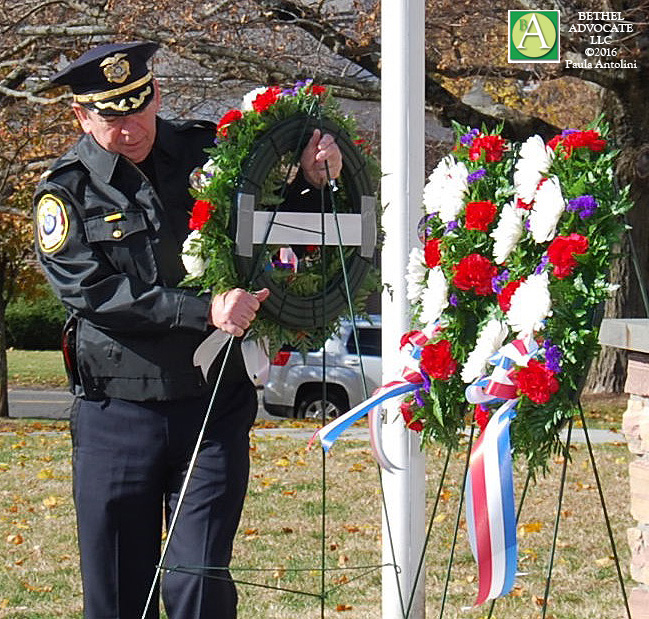 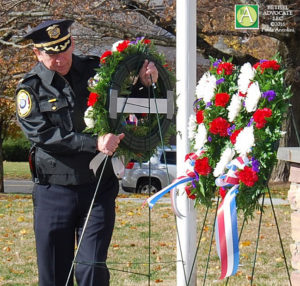 Photo above: Bethel Police Chief Jeffrey Finch places a wreath on the Bethel Veterans Monument on Veterans Day, November 11, 2016, during the Annual Veterans Day Ceremony on the CJH Municipal Center green.  Police Chief Finch, Army Veteran of Vietnam, who spent most of his time in Vietnam in helicopters, presented the wreath on behalf of Vietnam Veterans.

On a windy, sunny fall day Veterans stood proud, holding flags of the military along with the American flag, in front of the steps of the CJH Municipal Center on November 11, 2016.  The Bethel Annual Veterans Day Ceremony 2016 took place at 11:00 a.m. at the site of the Bethel Veterans Monument on the Municipal green.  Approximately seventy people gathered to honor all veterans who have served our country.

The invocation was read by Father David Pople. He discussed how soldiers who made it back may not return from war in the same condition as when they left, after which he said in prayer, in part, “Oh God you hold all lives, all our souls in life, and now we seek all our thanks in humble praise, for all your servants who have given their lives in defense of our nation, especially those who may now silently recall, and also those whose sacrifice may not have driven them to death, but who left them with not quite full lives, when they returned.  Some may have been scarred physically, some emotionally, some spiritually.” 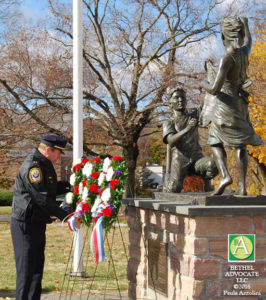 Four wreaths were placed at the veteran’s memorial by veterans, as Skip Clapp read their names and a short description, which included himself:

Bethel Chief of Police Jeffrey Finch, Army Veteran of Vietnam, who spent most of his time in Vietnam in helicopters, presenting the wreath on behalf of Vietnam Veterans

Commander Peters then said this ceremony is also “a tribute to the people that made it back.” He said, “At this time we are losing a thousand second World War vets a day … Show your appreciation for what they’ve done because next time you may not see them.”

“Please look out for those who are injured mentally and physically,” said Commander Scott Bertram, “and try to remember them in your prayers.” 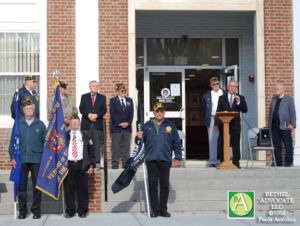 First Selectman Matthew Knickerbocker offered a few words and said,  “Today is the day we pause for a few minutes to honor the memory of those who have served in the Armed Forces, and those who serve today, and those veterans who are still with us today.”

Knickerbocker continued, “Many people don’t know that for every soldier and sailor there’s approximately ten Armed Forces personnel who support that mission, because no Armed Forces unit can possibly succeed, or in fact even survive, without being supplied with food, ammunition and equipment. So those who provided provisions during combat, we recognize their service to our country.  We also pause to honor those who served in peace time, because oftentimes the strongest deterrent and the best pace keeping force is a strong military that deters an enemy from approaching our shores.  To them and all of you, we say thank you, and on behalf of the Town of Bethel and my colleagues Rich an Paul, I thank you for taking time out today to join us.”

Skip Clapp in closing, said, “I would also like to offer my thanks to my fellow veterans here, Legionnaires, VFW.  You veterans out there, you men and women, it’s an honor to be one of you.  We are all brothers and sisters and, as the Legion says, there’s no rank among us, we’re all equals.  We all did the same thing for the same cause, no matter what branch or service.  I salute you all.” [He salutes.] 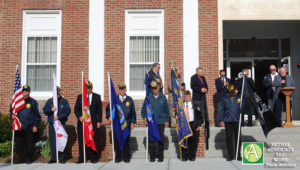 Photo above: Heads are bowed as Father Pople recites a prayer.

Father David Pople then did the benediction, a Prayer for Justice and Peace.

“May God Bless you and me with discomfort, with anger, with tears, and with foolishness.

With discomfort.  Discomfort at easy answers, half truths, and superficial relationships, so that you may live deep from within your heart.

With anger.  The anger at injustice, oppression and exploitation of people, that you may work for justice, freedom and peace in the world.

With Tears.  Tears to shed for those who suffer from pain, starvation, rejection and war, so that you may reach out your hand to comfort them and turn their pain toward joy.

And finally, may God bless us with foolishness, enough foolishness to believe that we can make a difference in this world so that we can do what others claim cannot be done.

May you and I and all people of earth be blessed with discomfort, anger, tears and foolishness of God.  Amen.”

(Please forgive parts of the video, the wind was blowing on microphones that day. We were also told mics were not working properly at times, as they were using another sound system than they normally use. Video sound gets better as it passes 4:00 mark.) 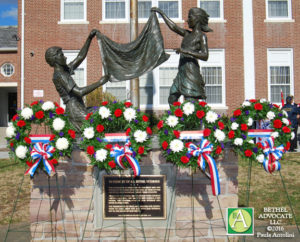 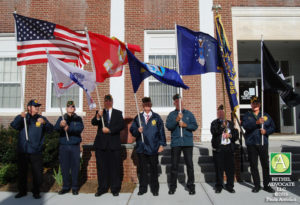 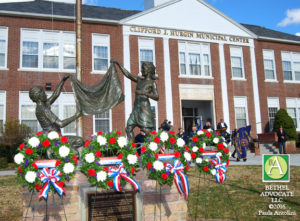 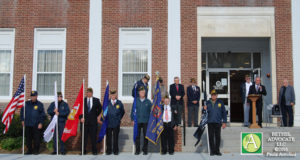 Photo above:  First Selectman Matthew Knickerbocker at the podium. 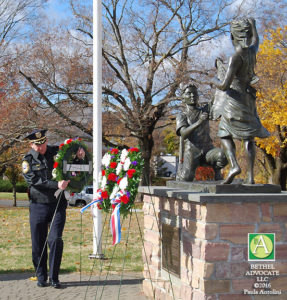 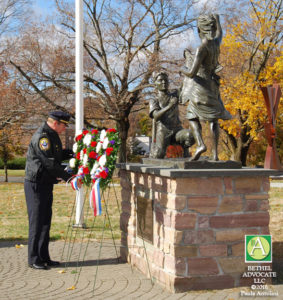 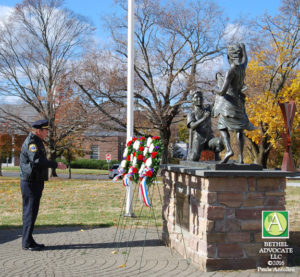 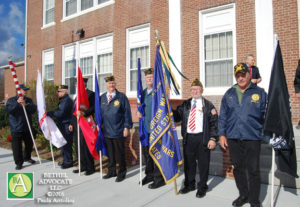 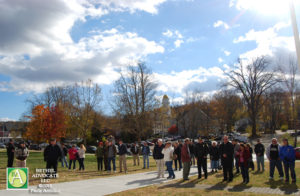 Photo above and photo below: Commander Scott Bertram places wreath at Veterans Monument, and salutes. 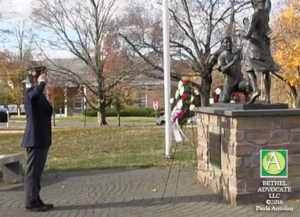 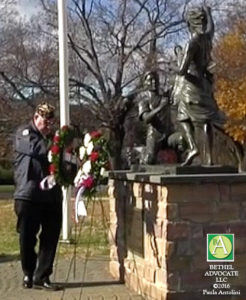 Photo above and photo below: Commander Tom Peters places wreath at Veterans Monument, and salutes. 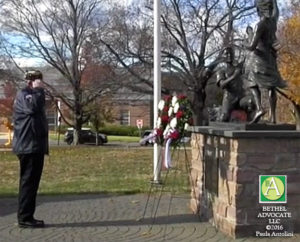 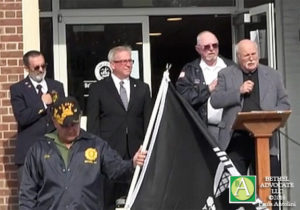 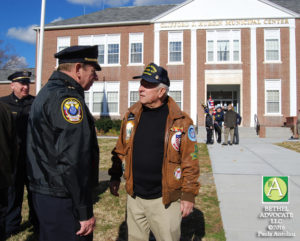 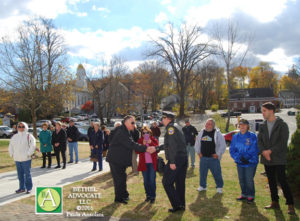 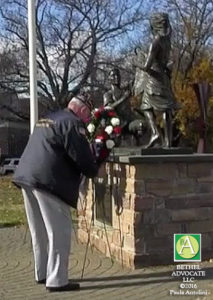 Photo above and below: Commander Skip Clapp places wreath at Veterans Monument, and salutes. 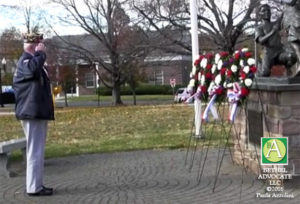 Photo above:  Commander Skip Clapp at the podium. 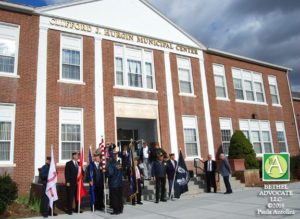 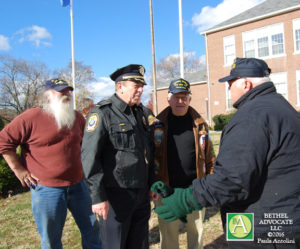 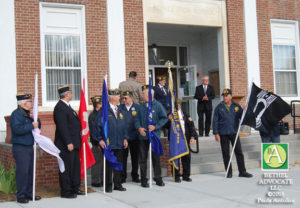 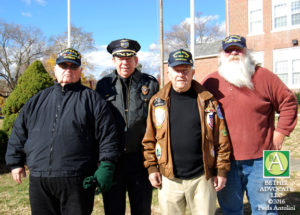 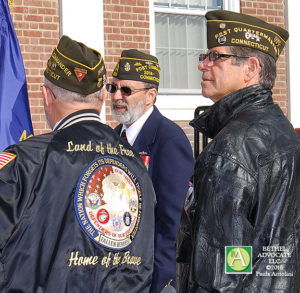