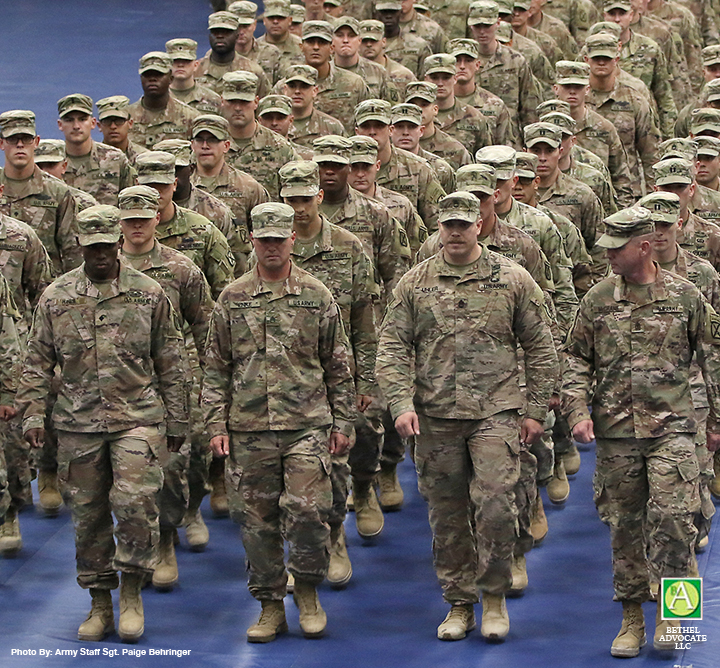 There are 25,000 Military Troops Expected in Washington D.C. for Presidential Inauguration; How Many Soldiers is That?

This Wednesday, January 20, 2021, the next presidential inauguration is scheduled to take place, but much different than other years. There are 25,000 military troops in Washington, D.C. so far, and numbers growing, that could reach 30,000, to keep everything secure.

“Four soldiers make up a team — a noncommissioned officer and three junior enlisted soldiers. Teams with special functions may also include officers or warrant officers. An infantry fire team might include two riflemen, one of whom is the team leader; a grenadier and an automatic rifleman, who is used when small reconnaissance or special missions are required. Teams can serve as a base-of-fire or as a maneuver element.”

“Two teams make up a squad, which has four to 10 soldiers. In an infantry squad, the teams divide duties: one serves as a base-of-fire element, while the other serves as the maneuver element. A staff sergeant is often in charge.”

“A platoon consists of a few squads and up to a few dozen soldiers. They’re generally run by a lieutenant, often with a noncommissioned officer as second in command. An infantry platoon might include a weapons squad, which is divided into two M240 machine gun teams, and two close-combat missile teams armed with Javelin missiles.”

“A company has anywhere from a few dozen to 200 soldiers. It’s a tactical-sized unit that can perform a battlefield function on its own. A company consists of three or four platoons and is generally commanded by a captain. It can also go by different names, depending on the function: Company-sized artillery units are called batteries, while in armor and air cavalry units, they are called troops.”

“Battalions consist of four to six companies and can include up to about 1,000 soldiers. They can conduct independent operations of limited scope and duration and are usually commanded by a lieutenant colonel. There are combat arms battalions, as well as combat support and combat service support battalions. An armor or air cavalry unit of equivalent size is known as a squadron.”

“A brigade consists of a few battalions and anywhere from 3,000 to 5,000 soldiers. A colonel is generally in command. For historical reasons, armor and Ranger units of brigade size are called regiments, and the equivalent Special Forces units are called groups. In 2016, the Army reorganized its brigades into brigade combat teams, which are autonomous modular brigades that most commonly include one combat arms brigade and its assigned support and fire units.”

“Usually commanded by a major general, divisions are made up of three or four brigades and include 10,000 to 15,000 soldiers. Current divisions include airborne, armored, infantry and mountain divisions. Each can conduct major tactical operations and sustained battlefield operations. They are numbered and assigned missions based on their structures.”:

“A corps includes two to five divisions with anywhere between 20,000 and 45,000 soldiers. A lieutenant general is in command. The corps is the highest level of command that can provide operational direction for actual combat. Higher levels are concerned with administration rather than operations. The current active corps are I Corps at Fort Lewis, Washington; III Corps at Fort Hood, Texas; and XVIII Airborne Corps at Fort Bragg, North Carolina.”

“A group consists of four or five field armies and between 400,000 and 1 million soldiers. They’re commanded by a general and are considered self-sufficient for indefinite periods. They’re usually responsible for planning and directing campaigns in particular geographic areas. To differentiate them from field armies, groups are usually written with Arabic numerals (example – 12th Army Group) as opposed to having their number written out.”

“These are only used in times of large-scale war, such as World War II. They usually consist of three or more field armies, with about 1 million to 3 million soldiers. They’re generally headed by a four- or five-star general.”

In another chart, according to WNET / Channel 13, (below) “18-hour PBS series The Vietnam War by Ken Burns and Lynn Novick” it shows a “Guide to U.S. Army Units.” If you do the math, this will give you an idea of how large the military presence is in DC, based in minimum and maximum numbers.

“If you don’t have a connection to the U.S. Army, the size of Army units can be difficult to grasp and therefore, the human scale of war. While figures are flexible and can vary by war and assignment (armored, artillery, cavalry, ranger), here are some explanations about how the U.S. Army is organized,” reads the “Inside Thirteen” August 19, 2018 article, updated July 31, 2020.