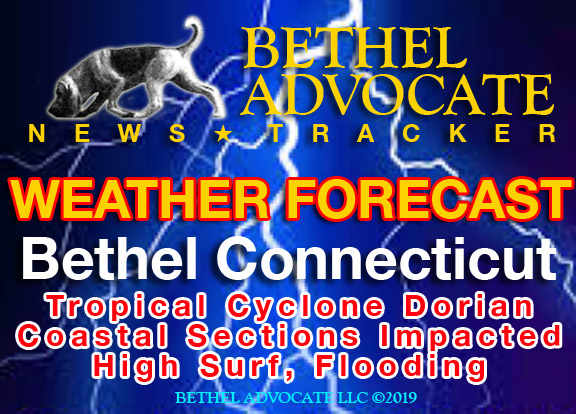 On Friday as Tropical Cyclone Dorian moves northeast and off the Mid Atlantic coast, cloud cover will increase across the region. The chances for rain will increase from south to north, especially late in the day and into the evening.

The best chance for rainfall will be across far eastern sections late in the day on Friday into Friday night. Any impacts from Dorian will be confined to coastal sections of the Atlantic coast line with dangerous rip currents, high surf, and the potential for minor coastal flooding.

By Saturday morning skies will clear as Dorian moves well north and northeast of the region. A northwest wind will diminish throughout the day with partial sunshine developing. Temperatures are expected to average slightly below normal through the weekend.

For the North Atlantic…Caribbean Sea and the Gulf of Mexico:

A small area of low pressure located a few hundred miles northeast of Bermuda is producing limited showers and thunderstorms, well to the southeast of the center. This system has become poorly defined and significant development is not anticipated.

An area of disturbed weather located several hundred miles east of the Leeward Islands is associated with a tropical wave. Only slow development of this disturbance, if any, is expected during the next

A broad area of low pressure associated with a tropical wave located about 100 miles east of the Cabo Verde Islands continues to produce disorganized showers and thunderstorms. Gradual development of this system is possible and a tropical depression could form while it moves westward across the tropical Atlantic Ocean through early next week. Enhanced rainfall is possible across the Cabo Verde Islands through early Friday as the disturbance moves through the region.

Mostly cloudy, with a low around 53. Calm wind.

A 40 percent chance of rain. Cloudy, with a low around 54. Northeast wind around 11 mph.

Mostly clear, with a low around 54. West wind around 7 mph.

Partly cloudy, with a low around 51.

Mostly sunny, with a high near 71.

Partly cloudy, with a low around 52.

Mostly sunny, with a high near 72.

Mostly cloudy, with a low around 56.

A 50 percent chance of showers. Partly sunny, with a high near 73.

A 30 percent chance of showers. Mostly cloudy, with a low around 57.

A 40 percent chance of showers. Partly sunny, with a high near 71.