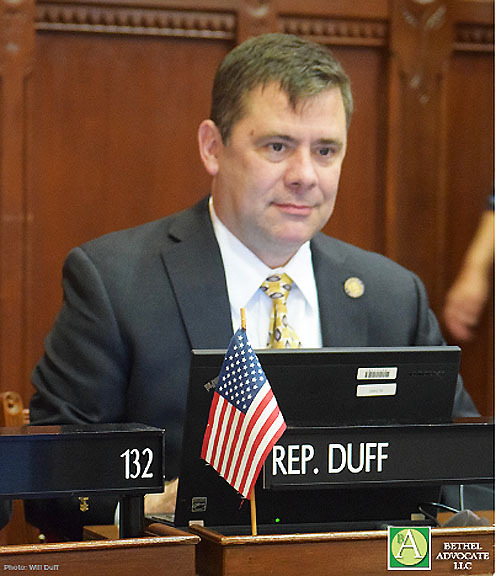 In this period of self-quarantine during the Coronavirus outbreak some people are more vulnerable than others to getting the disease.

One Bethel resident and former CT State Representative William (Will) Duff, fits right into that category with a unique case, a pre-existing condition of having battled Cystic Fibrosis from when he was an infant and diagnosed at age 6, later having a lung transplant when he was 41. “My lungs were deteriorating and literally falling apart,” he said. “I remember one time walking up a flight of stairs without oxygen and I passed out.” This ailment put him in a wheelchair for a while, and led to a lung transplant, then he recovered and remained on medications. Now at age 52 he contracted the Coronavirus.

Duff suddenly had symptoms of a high fever about 8 days ago. “I woke up with a high fever of 101 and I am high risk,” he said. He was then tested and diagnosed with the Coronavirus. He immediately went into quarantine, he said. “I was told the next couple of days are the most critical. It’s what happens in the next 5 or 6 days that I really have to keep an eye on because if I am going to have lung damage it will likely happen then.”

His fever comes and goes, and some days are better than others, but for now he is on watch waiting to get through what doctors have told him could be the worst part, he said. Presently he does not feel he is at that stage yet, or hopefully even will be. It’s a wait and see. “I stayed in quarantine because I have an obligation.”

He said of course he has been “extremely scared,” especially because of his medical history of Cystic Fibrosis. “I will be glad when it is over because I won’t have to worry about getting the virus anymore once I build up the antibodies,” he said. At the moment he does feel a pressure in his chest, which he termed a breathing problem. “The fact that I got it and it will be over and done with, is good. I cannot catch it again,” he said.

Luckily no one else in his family has gotten COVID-19, and for that he is thankful.

Duff had teleconferencing meetings with his doctor, as most doctors are doing now, he said. Duff is presently not on any special medications for COVID-19 but he has been on a prophylactic Azithromycin for quite sometime for the lung transplant, so perhaps that could prevent him from getting a worse case of the Coronavirus since that is one of the medications being recommended lately by medical officials.

Duff is not on Hydroxychloroquine, another medication that has been discussed by CT, NY and NJ governors and medical officials lately, as a possible remedy for the Coronavirus. The medication has not been tested yet for this cure. Duff said they are only doing that in a hospital setting at the moment, and if he needs it, that will be the case.

Duff’s family business, the Bethel Mail Services Center, has been in Bethel for 30 years and still going strong, located in Dolan Plaza at 211 Greenwood Avenue, and is closed at the moment as a safety precaution.

Duff says he is in a “holding” pattern and will be glad when 2 weeks is over, the typical amount of time it takes to know if you have the disease full blown or not, he said, “I am HOPING it is two weeks.”

Will Duff is loved by many and is a familiar face in town. Past jobs include a position as sheriff, and he has served on many Bethel boards including as Bethel Selectman and a member of the Bethel Board of Education, Board of Assessment Appeals, and serving as town constable.

Duff was nominated to run for office several times and in 2016 became the CT State Representative serving one term for the 2nd District, which covers Bethel and parts of Danbury, Newtown and Redding.

Duff plans on running against Will Haskell in 2020 for CT State Senator of the 26th district which includes Bethel, New Canaan, Redding, Ridgefield, Weston, Westport and Wilton.

For now Duff said he takes walks in his yard to breathe some fresh air and tries to stay positive. He absolutely follows the quarantine rules set by officials, closing his store well before he ever became ill. He now remains in isolation for the time being.

If anyone can win this battle it is Will Duff. He got knocked down in the past but always got up again and was stronger and he got right back in the game whether it was a medical battle or a political one. He is secretly called ‘Superman’ by many.

Duff has many well-wishers pulling for him and sending prayers. We wish him a speedy recovery.