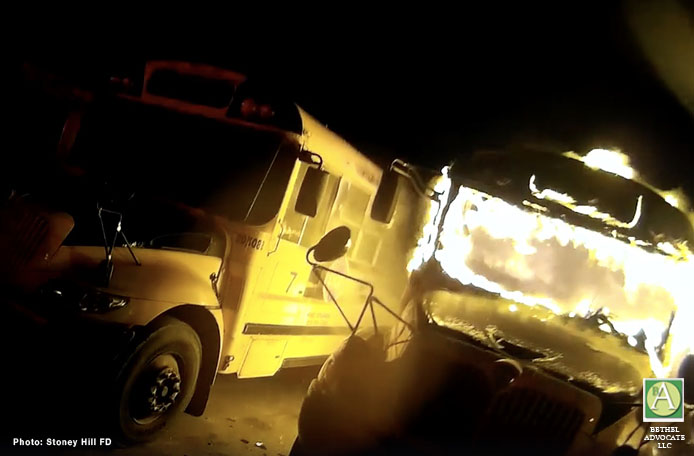 Just before 2:30am on 1/12/2020, Bethel & Stony Hill Volunteers were dispatched to the bus depot on Henry Street for the report of multiple buses on fire. Bethel Car 1 arrived on scene finding 1 mini bus and 1 regular school bus fully involved. A second full size bus was becoming involved. Video is as seen from Stony Hill Chief Engineer Magyar’s helmet mounted camera, arriving on Bethel Engine 6 (link below).

The situation could have been much worse if it werent for the observant Bethel Police Officer who smelled smoked in the Greenwood Ave area. Recognizing that the odor wasn’t just chimney smoke, the officer began to search the downtown area, quickly finding the source on Henry Street.

West Redding Volunteer Fire Department responded mutual aid with an engine and a tanker. The cause is under investigation by the Bethel Emergency Management & Fire Marshal office.

In a letter from the Superintendent of Bethel Public Schools, Dr. Christine Carver, to Parents, Guardians and Staff, on January 12, 2020, she stated:

“We want to inform you that last night at approximately 2:00 AM there was a fire at the First Student Bus lot in Bethel. It appears the fire originated with a small van, and because of the high winds, the fire spread to two full size buses. All three buses were damaged beyond repair.  The cause of the fire is currently under investigation with the Bethel Fire Marshall and Bethel Police Department. In the meantime, First Student will be checking the other buses to ensure there was no impact to the rest of the fleet.“

“Luckily, the affected full size buses were ‘spares’ and will not affect our bus runs tomorrow. First Student has also provided a replacement small van.  Once again, we would like to commend the Bethel Firefighters and Bethel Police Department for quickly responding to the incident. When we have more information, we will let you know.”

“Please do not hesitate to contact me at carverc@bethel.k12.ct.us if you have any questions.”