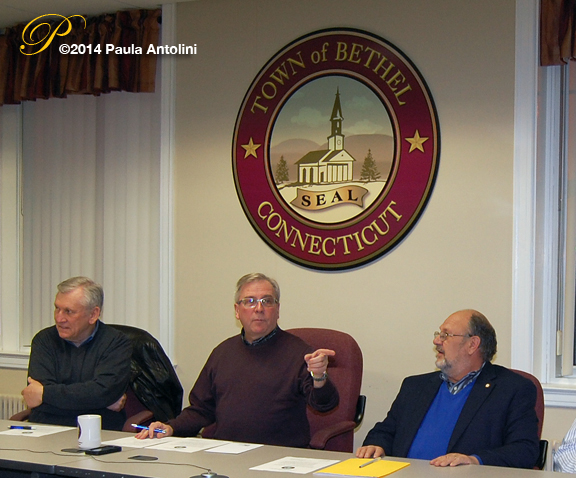 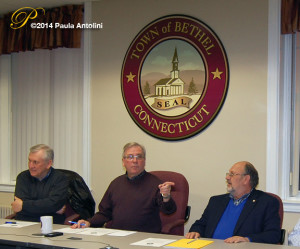 During the Bethel Board of Selectman meeting on Jan. 20, 2015, a decision was made to disband a number of existing committees.

First Selectman Matt Knickerbocker said the disbanding of the committees was simply “housekeeping.” He said, “Basically that was just housekeeping, that whole portion of the meeting was just cleaning up old stuff that should have been taken off the books long ago.”

Regarding the Franc Property Committee, Knickerbocker said, “We bought it [Franc Property]. That committee didn’t exist except to get us through the process of purchasing the property. I think at a previous meeting a year or so ago, we officially turned it over to the Park and Rec Commission to handle as a park.”

The only changes we’ve seen with the Franc Property is a sign installed and two posts with a chain, across the entrance. See photos below (click on photos to view larger).

Photo above: Entrance of Franc Preserve with sign set far back from road, and posts with chain across. 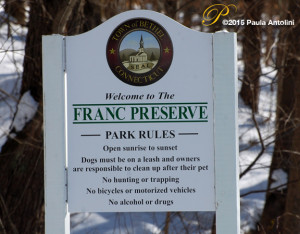 Photo above: Close up of Franc Preserve sign with park rules.

The Economic Outreach Committee was disbanded because its function was folded into the current Economic Development Commission (EDC), Knickerbocker said. He continued, “We had dual functions that were going on and especially since that Special town meeting stripped the EDC of its regulatory authority over the park, and really that gives the EDC more time to focus on stuff that the EOC had been doing.”

The Affordable Housing Committee was disbanded and any issues on this topic will be handled by another commission. Knickerbocker said, “That goes back to before, maybe at the beginning of, when the state was passing affordable housing regulations. That has all been absorbed into Planning and Zoning, that’s their bailiwick now.”

The Skate Park was taken down ten years ago, he said, and equipment had been originally donated to the town and the town still has it in storage. “The reason the town didn’t like it, and this goes way back to before I was involved in this stuff, the town didn’t like it there because it’s behind a row of trees and it’s impossible to police it and to provide supervision,” Knickerbocker said.

The Ad-Hoc Track and Field Committee was disbanded because the project was completed. “You know that beautiful orange running track that’s behind the high school, that’s donated, 100% of that is donated by a benefactor and there was a committee formed of experienced building trades people who advised on how the project should proceed, it’s almost like a building committee. The track, the fencing around it, that building that’s over in the northwest corner where they house all the equipment, even the restrooms,” Knickerbocker said.

Besides the beautiful track, an old garage had been converted into the building that now holds equipment. “Part of it burned one year, then there was a hole in the roof and the lady who donated the million-two to do the track said, ‘Let’s take this old building and make it into public bathrooms so we don’t subject people to nasty port-o-potties.’ So that’s how that happened. So that project resolved itself so that committee didn’t need to be on the books anymore either,” Knickerbocker said.

The Citizen Advisory (NU/CL&P) was disbanded because the project no longer exists, Knickerbocker said. “There’s another one that went away, the North East Utilities Advisory, that had to do with when these utilities put a high voltage line through the school park, and that was a contention issue and an ad-hoc issue was formed to negotiate and try to get something back from the utility. That was late 90’s when Judy Novacheck was in office. That project is long since gone.”

The Charter Revision Commission and Golf Authority was explained in the minutes of the Jan. 20 meeting, as follows, “The Charter Revision Commission ceases to exist when their report is made to the Board of Selectmen and Town Counsel Martin Lawlor will look into Golf Authority; it may have been created differently, i.e. and ordinance and disbanding would have to take a different route.”

Knickerbocker had this to say about the Golf Authority, “There’s one that we can’t make it go away. Thirty years ago there used to be kind of a rugged little 9-hole golf course where Francis Clarke Park is right now. Apparently there was some, I don’t know whether it was created under the auspices of some state office, a state grant per something, so we can’t disband the golf committee. There’s actually a golf committee that hasn’t met in thirty years. They’re on the books forever and the town clerk maintains the list, they haven’t met in 10-15-20 years, maybe more.”

Knickerbocker summed up the decisions: “So the ones that had expired a long time ago we just formally removed them from the list.”

99 thoughts on “Bethel Board of Selectmen Disbands Eight Committees”