The Beijing Platform for Action focuses on 12 critical areas of concern, and envisions a world where each woman and girl can exercise her choices, such as participating in politics, getting an education, having an income, and living in societies free from violence and discrimination.

In 2015 as International Women’s Day is celebrated across the globe on March 8, it also marks 20 years since an important meeting took place in Beijing, China.

Twenty years ago the Beijing Platform for Action was created and signed by 189 governments from around the world, creating an historic road map that set the agenda for realizing women’s rights. While there have been many achievements since then, many serious gaps remain.

An unprecedented 17,000 participants and 30,000 activists streamed into Beijing for the opening of the Fourth World Conference on Women in September 1995. They were remarkably diverse, coming from around the globe, but they had a single purpose in mind: gender equality and the empowerment of all women, everywhere.

Two weeks of political debate followed, heated at times, as representatives of 189 governments hammered out commitments that were historic in scope. Thirty thousand non-governmental activists attended a parallel Forum and kept the pressure on, networking, lobbying and training a global media spotlight. By the time the conference closed, it had produced the Beijing Declaration and Platform for Action, the most progressive blueprint ever for advancing women’s rights.

As a defining framework for change, the Platform for Action made comprehensive commitments under 12 critical areas of concern. Even 20 years later, it remains a powerful source of guidance and inspiration.

The Platform for Action imagines a world where each woman and girl can exercise her freedoms and choices, and realize all her rights, such as to live free from violence, to go to school, to participate in decisions and to earn equal pay for equal work.

The Beijing process unleashed remarkable political will and worldwide visibility. It connected and reinforced the activism of women’s movements on a global scale. Conference participants went home with great hope and clear agreement on how to achieve equality and empowerment.

Since then, governments, civil society and the public have translated the Platform for Action’s promises into concrete changes in individual countries. These have ushered in enormous improvements in women’s lives. More women and girls than at any previous point in time serve in political offices, are protected by laws against gender-based violence, and live under constitutions guaranteeing gender equality. Regular five-year reviews of progress on fulfilling Beijing commitments have sustained momentum.

Still, the Platform for Action envisioned gender equality in all dimensions of life—and no country has yet finished this agenda. Women earn less than men and are more likely to work in poor-quality jobs. A third suffer physical or sexual violence in their lifetime. Gaps in reproductive rights and health care leave 800 women dying in childbirth each day.

The 20th anniversary of Beijing opens new opportunities to reconnect, regenerate commitment, charge up political will and mobilize the public. Everyone has a role to play—for our common good. The evidence is increasingly in that empowering women empowers humanity. Economies grow faster, for example, and families are healthier and better-educated.

The Beijing Platform for Action, still forward-looking at 20, offers important focus in rallying people around gender equality and women’s empowerment. Its promises are necessarily ambitious. But over time, and with the accumulating energy of new generations, they are within reach.

This is the time to uphold women’s achievements, recognize challenges, and focus greater attention on women’s rights and gender equality to mobilize all people to do their part. The Beijing Platform for Action focuses on 12 critical areas of concern, and envisions a world where each woman and girl can exercise her choices, such as participating in politics, getting an education, having an income, and living in societies free from violence and discrimination.

To this end, the theme of this year’s International Women’s Day is the clarion call of UN Women’s Beijing+20 campaign “Empowering Women, Empowering Humanity: Picture it!”

Join governments and activists across the world in commemorating the ground-breaking Conference of 1995. It is a celebration of the many achievements that have come since then and galvanize action to address the gaps that still remain in making gender equality a reality.

There are many meetings that have taken place around the world and many more are scheduled, some right in New York.

CLICK HERE to view BEIJING +20 Schedule of Events.
This document highlights global, regional and national events taking place from 2014 to 2015 related to the 20-year anniversary of the Beijing Declaration and Platform for Action (Beijing+20).

CLICK HERE to view the Beijing Declaration and Platform for Action document.

“Planet 50-50 by 2030: Step It Up for Gender Equality” asks governments to make national commitments to address the challenges that are holding women and girls back from reaching their full potential.

Launching on the occasion of International Women’s Day 2015, Step It Up will showcase specific commitments that governments make, leading up to the United Nations General Assembly in 2015. 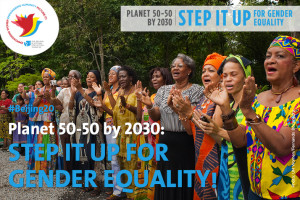 Step It Up comes at a critical moment in time as a new development agenda is taking shape to replace the Millennium Development Goals.

Passing new laws or strengthening existing ones is one way to Step It Up. Other actions might include creating programs to eradicate violence against women and girls, encouraging women’s participation in decision-making, investing in national action plans or policies for gender equality, creating public education campaigns to promote gender equality, and many more. The Beijing Declaration and Platform for Action and the UN Secretary-General’s report on its implementation provide progressive road maps for gender equality.

Everyone has a role to play to make gender equality a lived reality by 2030.