A rededication ceremony of E.M. (Earnest Moore) Viquesney’s “The Spirit of the American Doughboy” statue took place yesterday at 11:45 a.m. in P.T. Barnum Square, appropriately on Veterans Day.  The statue, originally dedicated on May 31, 1928, was recently returned to Bethel on November 4th, following extensive restoration work in the last months, starting on July 21, 2016. 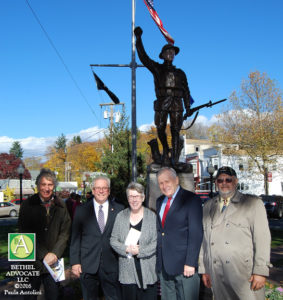 VIDEO/PHOTOS: Rededication of ‘The Spirit of the American Doughboy’ Statue by the Bethel Historical Society and Town of Bethel, in Memory of All Veterans

A rededication ceremony of E.M. (Earnest Moore) Viquesney’s “The Spirit of the American Doughboy” statue took place yesterday at 11:45 a.m. in P.T. Barnum Square, appropriately on Veterans Day.  The statue, originally dedicated on May 31, 1928, was recently returned to Bethel on November 4, 2016, following extensive restoration work in the last months, starting on July 21, 2016. 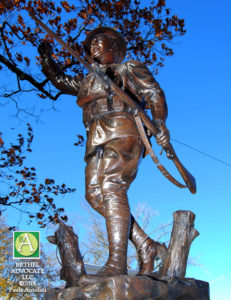 The Bethel Historical Society president Pat Rist lead the rededication ceremony that she described as a special occasion, 88 years after the original dedication.  Rist said, “The process began with David Gesualdi,” a local sculptor whose work includes the Veterans Memorial statue on the CJH Municipal lawn and and also the P.T. Barnum statue on the Bethel Public Library lawn.  Rist stated that Gesualdi originally called her and asked her to meet him at the statue, along with a representative from Polich Tallix, a fine art foundry who does restoration work, when he noticed the bottom of the Doughboy statue had started to lift off the base and a “powdery substance” was pushing the statue upward.

It was later determined that, “After 88 years of our Doughboy sitting out in the elements and moisture seeping into it, the concrete cement in the legs turned to powder.” Rist said.  “Originally concrete was used in the statue legs to lower its center of gravity and add stability,” she said.  “This was regretted later, as concrete and metal do not mix, and serious issues follow.”

The Bethel Historical Society then received a quote for the restoration work from Polich Tallix, and they presented it to First Selectman Knickerbocker who showed it to the Board of Selectman and it was approved unanimously to move forward with restoration work.

Pollich Tallix had not only done work on the Bethel Veterans Memorial statue and the P.T. Barnum statue, but had also worked on the Statue of Liberty and the “Genius of Connecticut” which is a winged female figure that sat atop the capital dome, Rist said.  The new “Genius of Connecticut”  currently sits inside the building, Rist said, and will probably be installed on the dome again when funds permit. 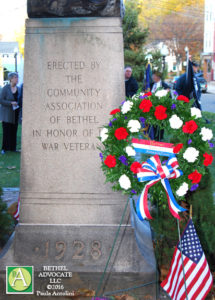 How was the original Doughboy paid for?  It involves the Masonic Temple, the Congregational Parish House, built in 1912, no longer standing,” Rist said.  Previously located at 82 Greenwood Avenue in Bethel, CT,  “It was later sold to the Community Association, and their plan had been to turn that into a Community House and turn it over to the veterans, but unfortunately that never happened. So in 1927 it was sold to the Masons for Bethel’s Masonic Temple.  The money raised from the sale of the building was then put towards the purchase of a Doughboy that went up in 1928,” said Rist.  Note: “Erected by the Community Association of Bethel in Honor of Her War Veterans” is on the statue’s base.

There were various prices for the Doughboy ranging from $1,000 to $1,500 plus shipping, excluding the cost of the pedestal and installation.  As the depression hit, the cost dropped to about $700.

“It took four years to come up with a decision to put a Doughboy in the square.  From 1924 to 1928 when the famous Bethel fountain was removed from the square, the space was empty.  And they finally came to a decision that the Doughboy was the best way to go,” Rist said. 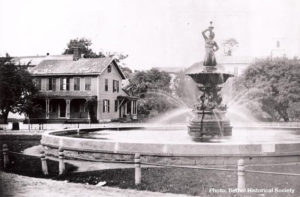 Photo above shows the original P.T. Barnum fountain that stood in the square. “The Barnum Fountain c.1905 In 1881, Bethel’s most famous son, P.T. Barnum, presented his birthplace with a tremendous 18 foot high fountain depicting a Triton blowing a conch shell. Barnum had purchased the fountain in Berlin, Germany for $7,000 and had it transported to his Bridgeport mansion, Waldemere. Unfortunately, for Barnum, the fountain required more water than he had anticipated. So it was that on August 19, 1881 Barnum visited Bethel and formally presented the fountain, after spending $3,000 of his own money to have an island of grass created for the fountain and then to have the fountain transported to Bethel from Bridgeport by horse and wagon. The fountain along with its concrete basin that was 30 feet in circumference existed until October 18, 1924 when it was dismantled after falling into disrepair. Four years later the Doughboy statue filled the void caused by the removal of the fountain.” — Bethel Historical Society 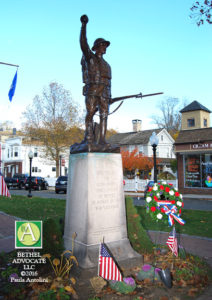 “The Doughboy honored 175 men of Bethel who saw service in WWI, of which, three died serving their country and they’re buried here in Center Cemetery,” said Rist.  The three young men that died were: James Masson, the first young man who enlisted, was a member of the regimental band organized in Newark, N.J.; James H. Trowbridge, U.S. Marine Corps; Henry Bromley, member of the 56th Coastal Artillery Guard.

With the approval of First Selectman Knickerbocker a mold was allowed to be made from the Bethel statue while at Polich Tallix, to install a Doughboy in Harrison New York.  It will not be called a Viquesney, it will simply be a copy, Rist said.  The making of the mold did no damage to the Bethel Doughboy statue. 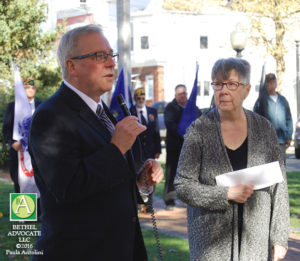 First Selectman Knickerbocker said, “Over the years, since 1928, if you look back through publications, through Chamber of Commerce materials, all different kinds of printed materials, there is one image that stands out as the symbol of Bethel and he’s right there (points to doughboy statue).  There’s no single sculpture that defines Bethel over the years, more than this one.”  Knickerbocker did acknowledge Dave Gesualdi’s two sculptures in town, the Veterans Memorial statue at the CJH Municipal Center and the P.T. Barnum state at the Bethel Public Library, saying those pieces, “are giving him [Doughboy] some competition,” but said that the image of the Doughboy is the one you will mostly find on printed materials.  “This is the symbol of Bethel that we’ve all come to love,” Knickerbocker said.

Veterans from various branches of the military also stood tall in the square, holding military flags and the American flag, that blew furiously in the November wind this day, along with a flurry of fall leaves.  A crowd of about seventy-five people attended the ceremony. 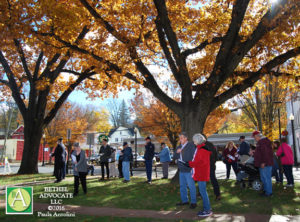 Pat Rist said there are many people to be thanked for caring for our Doughboy. “The Bethel Board of Selectmen for seeing the importance of this work and funding the project, the late Hugo Greco, who previously completed repairs on the Doughboy, sadly due to vandalism, David Gesualdi for seeing the current damage occurring and also watching out for all of Bethel’s monuments, the Bethel Historical Society Gary Boughton and   Gil Atelier for cleaning the base, which will be ongoing for a while.  And again, the most important reason we are here today, to rededicate the spirit of the American Doughboy, honoring those who served in WWI, as well as to honor all the men and women who have served in the last 88 years and who will continue to serve in the future.  Thank you to each and every one of you.”

VIEW VIDEO OF CEREMONY BELOW:

About “The Spirit of the American Doughboy” statue

While Viquesney wanted to depict an American soldier in battle, he didn’t want to depict excessive might or power by portraying a soldier charging or running forward.  Instead, he wanted to depict the “spirit” of the American Doughboy’s determination to protect freedom for their country and mankind.  So he portrayed a Doughboy striding firmly forward in an erect posture through “no man’s land.”  (Earl Goldsmith, The Woodlands, Texas)

Bethel is fortunate to have one of two Doughboys here in Connecticut.  The second is located in North Canaan.

Viquesney’s last Doughboy was delivered to Verona PA in 1943. 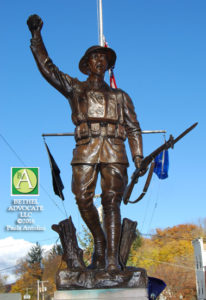 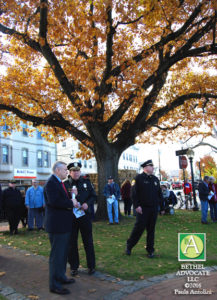 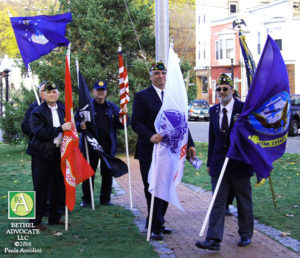 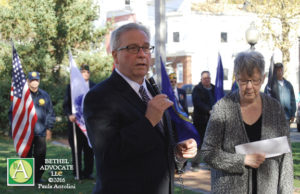 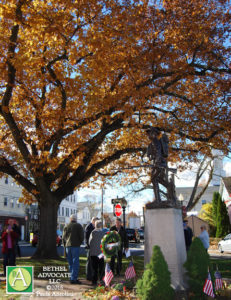 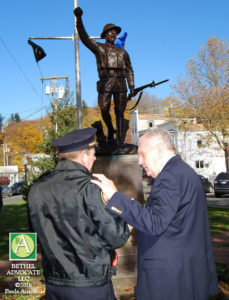 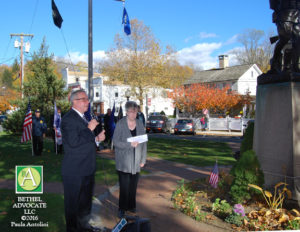 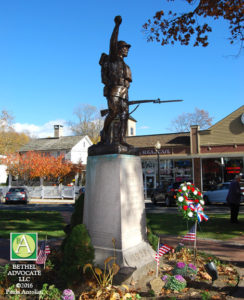 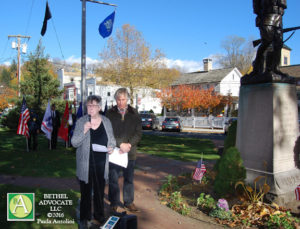 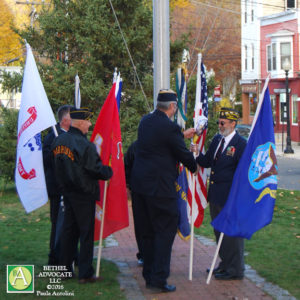 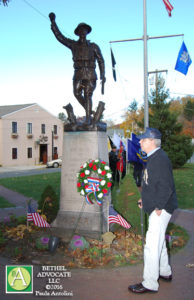 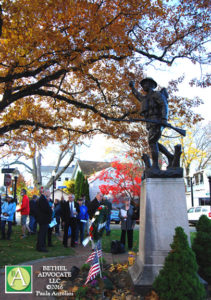 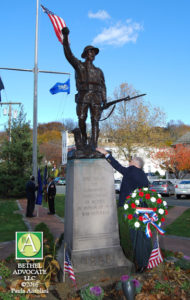