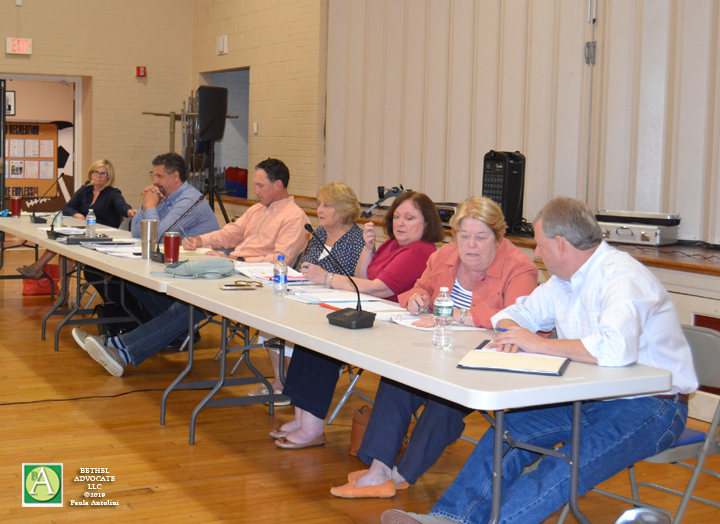 After 11 months of monthly meetings by the Bethel Charter Revision Commission there was not a sliver of information regarding exactly what changes the commission is considering.

Granted, the purpose of the September 25th meeting was to hear public comment, but at one point resident Cynthia McCorkindale, who spoke twice that night, was strongly urging the Commission to provide information to the public regarding any compiled list of notes on what changes they might be discussing for the charter so far. She even cited past years where the commission did give some information, but nothing this year.

However, very little information was forthcoming from the Charter Revision Commission.

Chairman Nick Hoffman began the hearing by saying, “I want to bring up everybody up to speed as to where the Charter Revision sits because there seems to be some confusion.” He said, “We received the charge from the Board of Selectman last October 2018, laying out some of the things they wanted us to look at.” They met for the last 11 months, every month, holding one public hearing last November, that Hoffman said “was robustly attended by four total people.”

Approximately 26 individuals attended the September 25, 2019 hearing that began at 7:00PM and took place in the General Purpose Room of the CJH Municipal Center at 1 School Street in Bethel, CT.

Hoffman would only say, “Our task over the last eleven months has been to collect information so we can make informed decisions about the direction of the Charter and yet changes that are necessary, improvements are necessary, some as simple as technical errors we’ve been adopting, others far more complex, whether it be extending the Board of Selectman term 4 years, and the budget being tied together in terms of yes/no votes. So there is in scale from incredibly simple to very, very complex.” … “Because of the sparseness [of public hearings] we chose as a commission to invite the public back again.”

Selectman Straiton was the first of the selectman to speak and said, “I am also a Selectman but I am speaking as a private citizen of the town. I believe that four years for the Board of Selectmen is an up and coming thing we should be looking at. The town’s growing so much, there’s a lot going on. You know, of you don’t want to consider four years maybe you should go back and look at all the other boards, the school board, the Planning and Zoning board, also all four years.”

Straiton also said he’d like to see the budget moved back to May.

Straiton said, “I would like to see us go back to one budget for one town.” He said, “Built into the Board of Education budget are a lot of things the town actually pays for. It’s not fair for the town people to have to give up road repairs and other things to support the Board of Education. If the town’s people reject the budget it should be across the board for everybody to share.”

Selectman Szatkowski spoke about two topics. He said, “One is, I am sure I’ve discussed this before, this is my approach relative to new building projects. Needless to say that, you know, if you take a look at our many of our major building projects they’ve been a disaster. The last one was our police station. Needless to say, it didn’t work out the way we wanted. The solution to this is very simple. it’s a shovel-ready project. In other words shovel-ready means that when we go to the electorate, our taxpayers, we say to them the following, let’s use this police station as an example, ‘It’s going to cost you three million dollars to give you the complete set of plans.’ If the electorate decides to say no, then it’s a dead issue. If they say yes to that three million, we get a complete set of plans, complete construction.”

Szatkowski said all of the major projects in the past have “been a disaster” with the exception of Berry School, that came in “ahead of schedule and under budget.”

“We’ve got to start thinking this way because what we are doing right now is backwards,” he said.

Szatkowski’s other issue is that he said he supports keeping the
budgets separate.

First Selectman Knickerbocker spoke “as a citizen tonight not as a Selectman” he said. He first stated that he supported Selectman Szatkowski’s “comment about changing the procedure for projects.” Knickerbocker corrected Szatkowski and said, “The project [Berry] was relatively problem free but it also was compromised because of unknown costs that you cannot predict, and the compromise in the Berry school was very minor, most people don’t know about, the gym had to be shrunk in order to make that stay within the budget. What that means is, you can’t use that school beyond third grade, So if we ever had a reconfiguration and you had to use it as, say a 3-4-5 elementary school in the future, you’d have to increase the size of the gym to do that. So what it means is, every single project we have done in the last 20 years has suffered from the same compromise “

Knickerbocker supported what he said was Szatkowski’s idea, “to pay for the engineering first, if we do, the voters would have to know were going to pay for that up front, bit then you would go to referendum with a guaranteed price that cannot change. That is the only way to solve that problem.”

Some of the topics from public input covered were (also view video above for full record):

One of the more memorable comments at the meeting, was from Cynthia McCorkindale, and included a short conversation between her and Chairman Nick Hoffman.

McCorkindale said, ““I went to every meeting and also looked everywhere for anything I could find, and I was unaware, I do have a question going in, and my question is ‘How, and I was at the July 10th meeting, did a draft of the proposal be in the First Selectman’s hands on September 4th where he would make recommendations, or that he would come back and say ‘I want to reconsider something.’ When did you have a meeting to approve a draft, proposals, to give to the First Selectman?”‘

McCorkindale said to the members of the Commission, “Right. So how many times does this go back and forth, why can’t the people see…”

She was cut off by Hoffman saying, “What goes back and forth?”

“The, whatever proposals, you know, I wasn’t even aware you had decided 100%, that everything that was going to be in the proposal ….” said McCorkindale, but was cut off once more when Hoffman said, “Because no one has.”

McCorkindale said, “Right. No, I understand that. But why would then there be correspondence (McCorkindale had a copy of the letter in her hand) that indicates that you responded in response to the proposed changes that are released by [points to commission].

Hoffman replied, “Because there’s ongoing attorney work [unintelligible] consistent with the direction of the commission but nothing has been decided, no report has been itemized ….”

McCorkindale quickly cut in, “I know nothing has been decided, but understand the logistics I have a little bit of a problem with. You may have not released it but it is referred to in the First Selectman’s letter as a ‘draft.’ And so he’s responding to that by saying, ‘I have the following changes to request.’ So it’s my understanding that there’s a charge put forth to the First Selectman … and I have no issue with there being back and forth on that regard, but what I have an issue with is that the people haven’t seen any of it. So we come to the public hearing, I’ve been to the meetings so I kind of know, but other people haven’t.”

“This Commission does not need to have this meeting at all,” said Commission Attorney Nick Vitti, in a very stern manner, “It is having this public hearing for the sole purpose of hearing general thoughts from the community.”

McCorkindale said, “I understand the process … I’m just saying that of you want to hold a pubic hearing generally for every other thing, that we have some information up front.