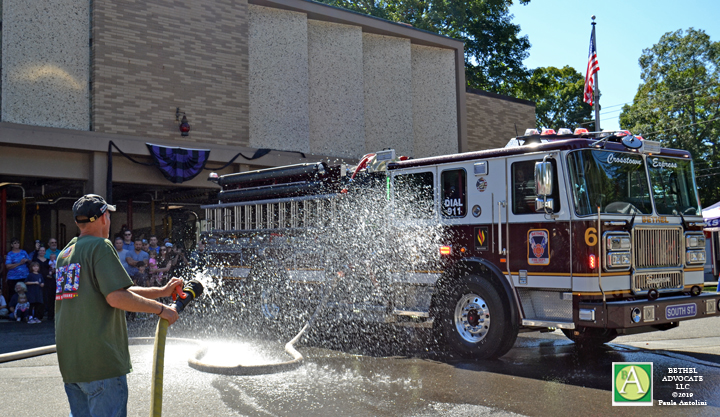 Chief Scott Murphy and Assistant Chief Ed Bruey began the ceremony by going through the roll call, which honors firefighters who died in the line-of-duty (Second Assistant Chief Brendan Ryan was out on a call, Murphy said, wires down on Nashville Road).

There is a monument on the Bethel Fire & EMS fire station property that includes a bell which was rung by past Chief Phil Valenti for each name read, in somber remembrance, as heads bowed. At the same time Chief Engineer William Cadella and firefighter Dave Broadhurst placed a wreath at the monument and saluted.

The names of those honored included Clyde Miller Finger, Jr., who died on August 20, 2019 and was a member of the Bethel Volunteer Fire Department since 1947, serving for over 70 years and holding every officer rank, including Fire Chief in years 1967-1972. He was a member of the Fairfield County Fire Chiefs Emergency plan and was inducted into the Connecticut Firemen’s Association’s Hall of Fame in 2013.

View the entire honor roll list at the bottom of this article.

*Tim Pelton, Commander Emeritus of the CT Statewide Honor Guard, spoke about the history and traditions in the fire service including the meaning of the Challenge Coin, many of which were given to certain individuals at the ceremony. These coins are a respected means of honoring law enforcement officers and other public servants, including the brave firefighters who continually risk their lives for the safety of others.

Bethel’s First Selectman Matthew Knickerbocker, Selectman Richard Straiton, and Selectman Paul Szatkowski (not present) were each given a coin, which are numbered. Chief Scott Murphy received number 1, and chronological numbers from there on, for other individuals such as the members of the committee that designed the truck.

Pelton told the story of a WWI pilot that was shot down and identified as an American and not a spy when they found the coin on him, which saved him. “One pilot was shot down, and as he tried to escape and get back to the airfield, he was captured by French partisans. They searched him, he had no identification, except for a medallion that he had put together for his squadron. And it was identified that he was not a German spy, he was indeed an American pilot and was not executed, and was returned to his unit. So from WWI to today the use of the challenge point has become an important icon within the military and the fore service,” Pelton said. “The most prestigious coin is the astronaut coin,” he said.

The wetdown began when water was taken from old Engine 6 (1998 E-One Cyclone pumper) and put into the new Engine 6 (2019 Seagrave Marauder) as onlookers mostly stood in the station. The Stony Hill Volunteer Fire Company then sprayed the truck continuing the traditional wetdown.

People were invited to “push” the truck back into the station, following an old tradition. “This tradition has its origins in the days of horse-drawn fire apparatus. When a company would return from a run, members would have to disconnect the horses from the rig and back the apparatus into the firehouse because the horses could not go backward. At the housing for Engine 25, different groups pushed the truck into quarters three different times.” — Fire Appararus Magazine

Engine 6 was ready for service! It already ran its first two calls by 9:00 p.m. that night.

There was food and refreshments and socializing until past 4:00 p.m. and T-shirts and coins were sold to the public. Local radio station 105.5FM was there providing music and support.