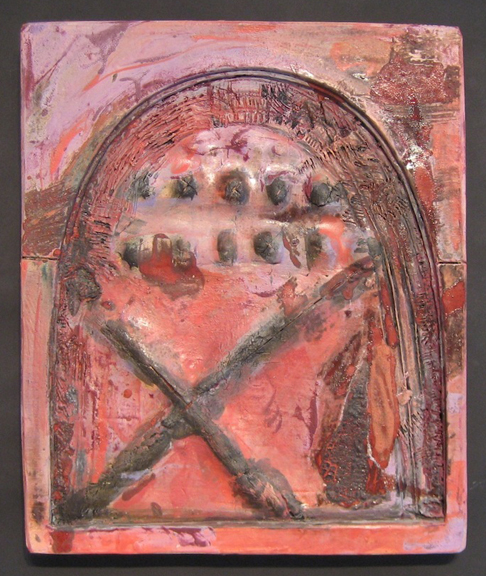 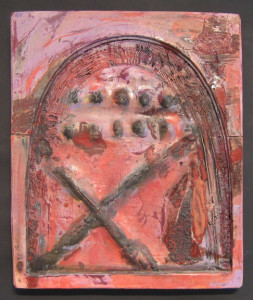 “What truly sets us apart from each other is whether or not we know ourselves enough to reflect objectively; but, through our own unique ‘voice’.” – Solange Nicole (author)

When the curators of visual art exhibitions at @287 Gallery & Meeting Place, Maureen and Bill McCann, were asked “what’s next?” following the well received Spring solo show of works by Tom Wolfe, they immediately responded with the oft heard Summer request: “Make it two!!” “Two Views II,” highlighting the paintings, sculpture and works in mixed media by New Fairfield residents Mary Lou and Robert Alberetti, is appropriately named. The title of the show, is reflected in the two artists’ views of similar subject matter and in the fact that each artist has used two ways to express the ideas generated by those subjects. “Two Views II” opens Friday, July 24th with a reception, 5:30pm to 7:00pm, at @287 Gallery & Meeting Place, 287 Main Street, Danbury. The duo show (!!), installed by Visual Impact, will run through October 9th. Hours are 10:00am to 4:00pm Monday to Friday, and also by appointment. An RSVP to the reception is requested. Visit eventbrite at  http://bit.ly/1fC070W 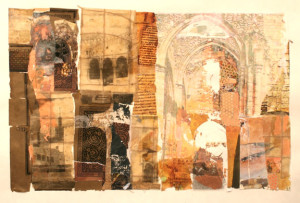 Mary Lou Alberetti is a studio artist and professor emerita from Southern Connecticut State University, with an MFA degree from Arizona State University. She has a 40 year background in the arts and has worked with numerous art consultants and galleries. Her works are found in civic, private and corporate collections including HBO World Headquarters NYC and the Mint Museum of Art and Design, NC. Architecture is the basis for Mary Lou Alberetti’s mixed media, collage, ceramic reliefs, and sculpture, with both the process and the theme playing equally important considerations for the creation of these works. Architectural references, some literal, some more abstract, offer an aura of timelessness and antiquity through the surfaces of multi-layered colors and textures. Summers spent in Italy, Spain, Turkey and France have provided the resources and inspiration as the artist seeks to create a poetic quality in her work by capturing the essence of light and color.  An amalgam of drawing, painting and sculpture, the resulting works reflect fragmented architectural forms, imbued with the artist’s fresh point of view.  Douglas Clement, in  Art New England, described her work as “full of light and seems freshly plucked from some often–traveled Tuscany thoroughfare on a bright summer day. Alberetti casts gems in the minute – the pleasant details that can bring back the mood of an entire region.” www.maryloualberetti.com 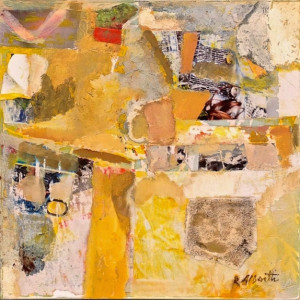 Boston-born artist, educator, and designer, Robert Alberetti earned a B.F.A. in painting from the Massachusetts College of Art and Design, and as a scholarship recipient at the Rhode Island School of Design, he earned a Master of Science degree. Military service led him to Panama, where upon discharge, he stayed as a Special Services Arts and Crafts Director. He began his teaching career in 1963 at Western Connecticut State University where he retired in 2003 as full professor. He was chairperson of the Art Department for six years in the late 70’s. In addition to post-graduate work at New York University, he earned his Master of Fine Arts in painting at Arizona State University. Alberetti has shown at the Panama Museum of Art; the De Young Museum, San Francisco; the Pentagon, Washington D.C.; the Aldrich Museum of Art, Ridgefield; and the Mattatuck Museum in Waterbury. 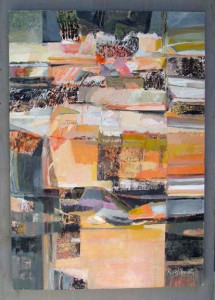 For three summers he taught at the Ciafiordi School of Art, Petralunga, Italy and previously at the Southern Connecticut State University summer program in Urbino, Italy.  For the past ten years Alberetti has continued to teach at WConn as an emeritus adjunct professor in the undergraduate and Master of Fine Arts Graduate programs. About his work, Robert Alberetti writes: “Imagination and emotion are the catalyst for my paintings, collages and mixed media works. These allow me to focus on the significant aspects of remembered scenes and experiences.  I reference on-site paintings, sketches and photographs from my travels. This process enables me to develop the formal attributes of the work, i.e.; color, shape, texture, form and value. Having works imbued with emotion, which may resonate with the viewer, is a major factor in my working process.” www.robertalberetti.com

For more information, call the Cultural Alliance of Western Connecticut at  (203) 798 0760 or visit  artswesternct.org

The Cultural Alliance of Western Connecticut, with offices at 287 Main Street, Danbury, CT, is a leader in supporting a vibrant arts and culture community in Northern Fairfield and Southern Litchfield Counties. The Cultural Alliance promotes and advocates for arts, history, and culture as a primary driver of the economy and as an enriching influence for communities and people. The Cultural Alliance of Western Connecticut, a 501c-3, is the largest and only regional service organization working to ensure better access to arts and culture for all residents and visitors in Greater Danbury. It is supported by public and private funding, corporate sponsors, and by its 185 members including more than 55 arts, history, and cultural organizations. phone: (203) 798 0760 www.artswesternct.org