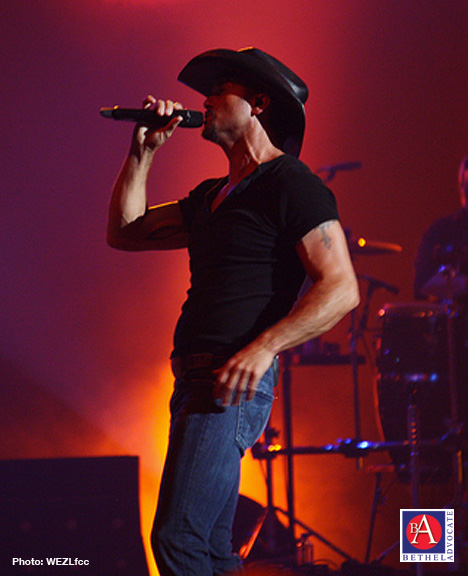 Tim McGraw to Perform in Concert for Sandy Hook Promise, July 17, Amidst Controversy

“Out of this tragedy a group was formed that made a promise to honor the lives lost and turn it into a moment of transformation,” said McGraw. 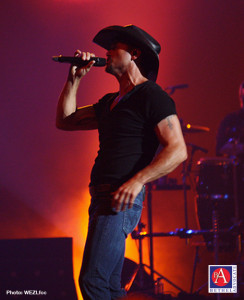 Tim McGraw has announced that on July 17, 2015 at XFINITY Theatre in Hartford, Connecticut, he will headline a Concert for Sandy Hook Promise. One-hundred percent of the net proceeds of this special event will benefit Sandy Hook Promise, an organization founded in the wake of the shootings at Sandy Hook Elementary School in Newtown, Connecticut, with a mission of protecting children from gun violence.

Tickets for “Tim McGraw: A Concert for Sandy Hook Promise” went on sale Friday, April 17, 2015 at 10 a.m. through LiveNation.com and Ticketmaster. Charge By Phone 800-745-3000. Featured performers will include current tour mates Billy Currington and Chase Bryant, along with special surprise guests to be announced later.

“Out of this tragedy a group was formed that made a promise to honor the lives lost and turn it into a moment of transformation,” said McGraw. “Sandy Hook Promise teaches that we can do something to protect our children from gun violence. I want to be a part of that promise – as a father and as a friend.”

This cause is close to Tim’s heart, as it is to the fiddle player in his touring band, Dean Brown, a longtime friend to Mark Barden, a musician and father of a child, who was killed in the 2012 tragedy. “I look forward to being a part of a night of hope and promise and music that will help continue the great work that Sandy Hook Promise is doing,” said Brown.

“We are humbled that Tim would do this for us,” said Barden. “Dean and his wife Cindy helped my wife and I through our darkest hour and helped buoy our spirits. It meant more than words could ever say.”

Tim McGraw has responded to backlash surrounding his decision to play the Concert for Sandy Hook Promise in Hartford, Connecticut in July.

In a statement to Fox News he says, “Let me be clear regarding the concert for Sandy Hook, given much of the erroneous reporting thus far. As a gun owner, I support gun ownership. I also believe that with gun ownership comes the responsibility of education and safety — most certainly when it relates to what we value most, our children. I can’t imagine anyone who disagrees with that.”

Tim has been getting flak from gun advocates who claim that he’s a hypocrite for doing the show. Tim’s opening act Billy Currington has already pulled out of the performance.

“I’ve never been one to take on controversial issues – I’m a singer. I do feel strongly about honoring and supporting the Sandy Hook community and will be making a donation to a local organization. I appreciate people’s freedom and passion for whatever cause they want to support, however, I am choosing to step aside from this fundraiser and will focus instead on the rest of the tour dates as I look forward to being on the road with Tim and Chase and having a blast with all of the fans.”
-BC

To donate directly to Sandy Hook Promise go to www.sandyhookpromise.org

About Sandy Hook Promise:
Sandy Hook Promise, based in Newtown, Connecticut, is led by family members who lost loved ones in the tragic mass shooting at Sandy Hook Elementary School and parents from the community. Our sole purpose is to protect children from gun violence by providing and empowering parents and communities with mental wellness and gun safety programs that help identify, intervene and stop at-risk individuals from hurting themselves or others so no other parent experiences the senseless, horrific loss of their child. To learn how to help protect children from gun violence, go to www.sandyhookpromise.org. Sandy Hook Promise is a non-profit 501c(3) foundation.

About Tim McGraw:
Tim McGraw has sold more than 40 million records worldwide and dominated the charts with 36 #1 singles. He’s won three Grammy Awards, 16 Academy of Country Music Awards, 14 Country Music Association Awards, 10 American Music Awards, three People’s Choice Awards and numerous other honors. His iconic career achievements include being named the BDS Most Played Artist of the Decade for all music genres and having the Most Played Song of the Decade for all music genres with “Something Like That.” He is the most played Country artist since his debut in 1992, with two singles spending over 10 weeks at #1 (“Live Like You Were Dying” and “Over and Over”). The two-time GRAMMY-nominated “Meanwhile Back at Mama’s” marked Tim’s 54th career Top Ten Hit off his latest album, SUNDOWN HEAVEN TOWN (Big Machine Records). The project also produced the #1 “Shotgun Rider” and current single “Diamond Rings and Old Barstools” featuring Tim’s cousin, Catherine Dunn. His critically acclaimed acting skills were highlighted in the award winning Friday Night Lights and The Blind Side. Tim will star in Disney’s Tomorrowland in theaters May 22.

89 thoughts on “Tim McGraw to Perform in Concert for Sandy Hook Promise, July 17, Amidst Controversy”