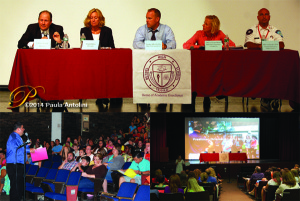 *****
Concerned parents directed many questions to police, substance abuse professionals and emergency services, during a panel discussion at BHS.

5) The grade belongs to the student.?

6) Encourage interactions between your child and his teacher.?

8) Check Power School WITH your child.?

10) Encourage your child to get involved.?

?14) Communicate with other parents.?

Alison Fulton discussed ways for parents to help their children make good decisions and build good relationships with adults. She cited, “Only 24% of kids say they have strong adult role models.” She said that for example, adults need to watch their own behavior in swearing, gossiping and road rage, etc..

Fulton said that parents need to make their expectations clear to their children about rules and regulations pertaining to drugs and alcohol. She stated that 25% of 9th graders used alcohol in the last 90 days, 12% used marijuana, and 6% used prescription drugs. She then said that 40-60% of young individuals having alcohol in the past month is more the norm. With the accompanied Alabama Fake ID becoming more the ‘norm’ too, teenagers are able to consume alcohol with no barriers, which makes the statistic more believable.

Alcohol continues to be the most prevalent substance of choice of area teens and is a national cause of more teen deaths than all illegal drugs combined.

Regarding community values, Fulton asked, “Does it make a place for kids to be celebrated? She suggested that parents use kids as resources in volunteer coalitions to organize things around educational awareness and substance abuse.

A parent asked, “Where are kids getting the drugs from?” 13-year Detective Matt Zavatsky answered, “Kids are prescribed these drugs and giving them out to their friends. Also the black market.” He continued, “Marijuana is not the gateway drug anymore. It starts from the prescription pills.” EMT Matt Cassavechia added, “Prescription drugs are right in your home.”

An audience member asked, “What kind of drugs are they taking?” Cassavechia said, “Oxycottons (another name for oxycontin, painkillers), Percocet, Ridalin, Adderall (used for attention deficit hyperactivity disorder, or ADHD).” Those parents that are worried about their kids using any of these illegal drugs, or others, should realize they have the power to conduct the urine testing of their child in order to know if they are under the influence of these substances.

Another parent in the audience said, “Lock up your liquor, your prescription pills, and lock up your guns,” which produced loud applause from others at the meeting.

20-year criminal defense attorney Jeffrey Jowdy stated, “I’ve had far too many cases that have come out of this high school and it was all preventable.”

Jowdy detailed the 2012 “Social Host Law” and said, “Any parent that owns a home where alcohol is distributed by them or someone coming to the home, they are libel, criminal and civil.” There is no bail or bond in juvenile court, they are more strict and parents have control of whether you go to jail or not.

The “decriminalization” of Marijuana was also discussed, and that possessing it is still illegal. Decriminalization means the penalties for marijuana possession in the state of Connecticut have changed from jail time to fines.