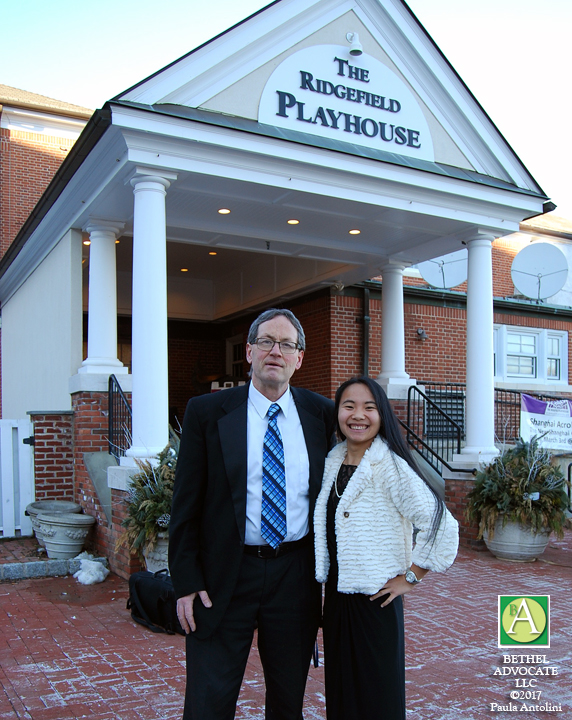 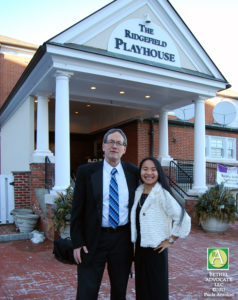 The Ridgefield Playhouse had an encore screening in HD of the National Theatre of London “Amadeus” on Sunday evening, February 19, 2017, at 6:00 p.m., 80 East Ridge Street in Ridgefield, CT. 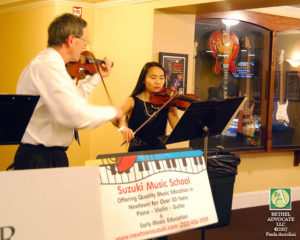 Of special interest was when Deming and Antolini used “upside down Mozart music” to simultaneously play a piece named “Der Spiegel,” written by Mozart in that exact manner, with music facing two directions at once.  This is a violin duet in which both violinists read the same sheet of music from opposite sides, facing one another.  (View video below.)

Larry Deming is presently a Violin Instructor at The Suzuki Talent Education School in Sandy Hook, CT.  He also teaches Violin and Viola at the Kent School in Kent, CT since 2013, is a Violinist in the Springfield Symphony Orchestra in Springfield, Massachusetts since 2010, and an Instructor in Violin and Viola at the Hotchkiss School in Lakeville, Connecticut, since 2004.   Deming is the Director of the Summer Strings Program at the Danbury Music Centre Inc. in Danbury, Connecticut, since 2002, and the Concertmaster of the Danbury Symphony Orchestra. He has been a musician in the Springfield Symphony Orchestra from 1991 to 2000.  He was a violinist in the Hong Kong Philharmonic Orchestra in Hong Kong, from 1984 to 1991.

Gia Antolini, age 16, has attended The Suzuki Talent Education School for 12 years, receiving violin instruction from teacher and professional violinist Larry Deming and classical piano instruction from teacher and professional pianist ****Paul Malyszka.  Antolini is a Bethel High School (BHS) junior, and is presently a violinist in the BHS Orchestra receiving instruction from BHS music teachers Mr. Richard Baumer and Mr. Damon Coachman.  Gia was named Bethel High School Orchestra Concertmaster in 2016.  She has been a member of the Bethel Public Schools Orchestras since 2009.  She has also performed on classical piano with the BHS orchestra and as an accompanist for the BHS Concert Choir and BHS Band.  Antolini was accepted into the Connecticut Music Educators Association (CMEA) Western Region High School Orchestra in 2017 and performed in the Western Region High School Festival in Westport, CT, on January 14, 2017.  Gia was also accepted into the Fairfield County String Orchestra in 2013, 2014, 2015, and performed in the Fairfield County String Orchestra Festivals at Western Connecticut State University.  Gia won the Bethel Public Schools BMS Chopin Piano Competition three years in a row in  2012-2013-2014.  Gia is a member of the National Association for Music Education (NAfME) Tri-M Music Honor Society since 2015 and a member of the National Honor Society 2016. 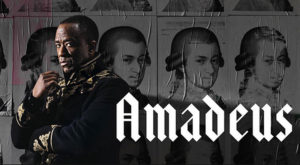 About the National Theatre of London encore performance film of “Amadeus” from the Ridgefield Playhouse:

Wolfgang Amadeus Mozart, a rowdy young prodigy, arrives in Vienna, the music capital of the world – and he’s determined to make a splash. Awestruck by his genius, court composer Antonio Salieri has the power to promote his talent or destroy his name. Seized by obsessive jealousy he begins a war with Mozart, with music, and ultimately, with God.

After winning multiple Olivier and Tony Awards when it had its premiere at the National Theatre in 1979, Amadeus was adapted into an Academy Award-winning film.

The Ridgefield Playhouse is a not for profit 501 (c)(3) whose mission is to present a variety of performing arts to the community and the surrounding area that they can enjoy and experience at a varied price point. The Playhouse presents national and local acts and is the cultural hub for the town of Ridgefield.

After many years of planning, fundraising, and building, the dream of restoring the Cass Gilbert Jr.-designed theater in Ridgefield became a reality with our December 2000 opening night performance by Jose Feliciano.

*WMNR Fine Arts Radio 88.1FM, is a radio station licensed to Monroe, Connecticut. The station is municipally owned by the Town of Monroe and broadcasts classical music in Connecticut, Long Island, and Westchester County, New York.

***The Suzuki Talent Education School of Sandy Hook Village has been offering quality music education for children and adults since 1977. From its earliest beginnings, the school has strived to follow the teachings of Dr. Suzuki who believed the most important goal was the development of the whole child through music education. The School was founded in 1977 by W. Jeanne Luedke in South Britain, CT. The school moved to Newtown in 1985. In 1987, Helen Malyszka and Andrew Lafreniere became co-directors when they purchased the business. The School has been in its current location in Sandy Hook since 1992.

****Paul Malyszka has been teaching piano at the Suzuki Talent Education School since 2002. He was a student of the Suzuki Method beginning his study at the age of three. He received his B.A. in Music from Manhattanville College and M.M. in Piano Performance from The University of Hartford at The Hartt School of Music. He is also the Director of the Choral Division at The Wooster School in Danbury, CT where he directs the Middle School and Upper School Handbell Choirs, Middle School Chorus, Wooster Singers and the auditioned Madrigals Choir. Paul has been a member of its faculty since 2004. He has been the Director of Music at King Street United Church of Christ in Danbury, CT since 1999. He is the full time organist and choir director of the Junior and Senior Choirs. He has also worked as the Piano Accompanist for the Southington Festival Chorale, and King Low Heywood Thomas School in Stamford, CT. 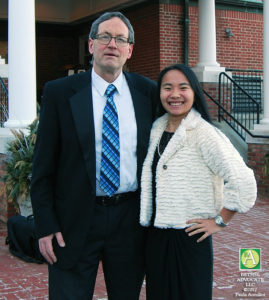 Photo: Larry Deming (left) and Gia Antoini in front of the Ridgefield Playhouse before the performance. 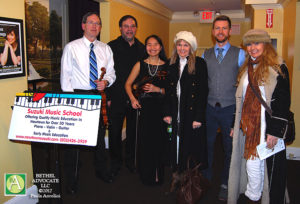 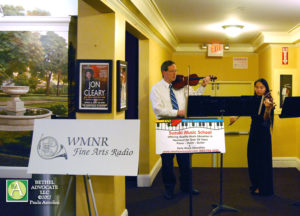 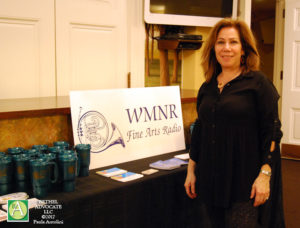 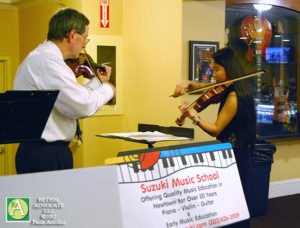 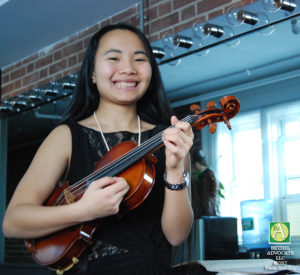 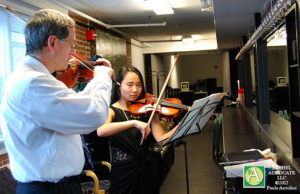