“These crossings have caused numerous deaths for years and it happens all across the state. I will not accept the premise that there is nothing we can do.” –Gov. Cuomo 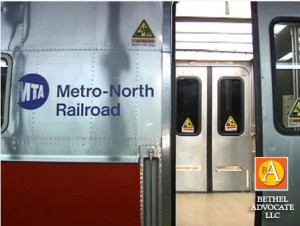 Another Metro-North train accident just occurred … is this news becoming all too common to hear?

On Wednesday afternoon, April 27, 2016, a Metro-North train hit an automobile on the Metro-North train crossing on Green Lane in Bedford, near the intersection of the Saw Mill River Parkway.  The vehicle occupants were able to exit the vehicle beforehand and no one was hurt but the accident caused major backups on local roads during rush hour traffic. An investigation is now ongoing as to how this accident happened.

“Last night, there was another accident at a grade crossing where a Metro-North train struck a disabled car on the tracks in Bedford Hills. These accidents are all too frequent and devastating – I remember as one of the first on site at last year’s gruesome crash in Valhalla that killed one person in a vehicle, five passengers on the train, and injured dozens.

“These crossings have caused numerous deaths for years and it happens all across the state. I will not accept the premise that there is nothing we can do. My administration has contacted the federal government, charged with approving grade modifications, and informed them that we must go forward immediately with new design features that create safer crossings. We will explore all potential options: motion detectors, painting danger areas on the street, voice commands, public information campaigns, etc. I have directed the MTA, which has already been working on options, to have several plans presented next week and asked the federal government to cooperate with their approval in weeks, not months. If we know this system doesn’t work well, we have to act with common sense to change it. And we must act quickly, because enough is enough.”

“I stood with Governor Cuomo at the horrific Valhalla accident, when he vowed to get federal government cooperation and MTA ideas for improving railroad crossing safety. The MTA has several changes that we believe can be helpful and we look forward to refining them with federal government and deploying them as soon as possible. We have spoken with FRA Administrator Sarah Feinberg and she has said she will be here as early as this week. Grade crossings are a chronic problem going back to the beginnings of the railroad system in America. No matter, it is our problem to solve – and we will.”