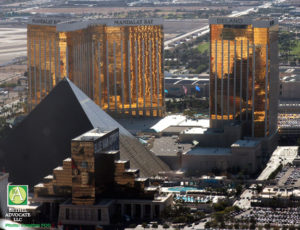 Photo: Mandalay Resort and Casino (background) in Las Vegas, Nevada, where gunman Stephen Paddack had his vantage point, killing 59 and injuring 527 people, in a tragic shooting is now labeled “the worst mass shooting in U.S. history” that took place on October 1, 2017.  Concert goers were attending the Route 91 Harvest Festival, listening to country singer Jason Aldean when gunfire broke out from the 32nd floor of the Mandalay at about 10:08 p.m.

Newtown Action Alliance released a statement on October 2 in response to the Las Vegas, NV, shooting on October 1, 2017:

“While we wait for more information to be released and the investigation to be completed, we cannot ignore that fact that rapid-fire weapons of war were used to brutally murder innocent Americans who were simply attending a live concert in Las Vegas. Over and over again, military-style assault weapons are the weapons of choice for mass shooters due to the sheer lethality of their design. Assault weapons are designed to kill as many people as possible as quickly as possible.

“After the Sandy Hook tragedy and other mass shooting incidents, thoughts and prayers are offered by Congressional members who stand with the NRA. But these members of Congress have failed to do their job to keep all Americans safe. Taking action to reduce gun violence should not be a political issue. It is a matter of public safety and public health.

“We implore all members of Congress to dig deep and find the courage to immediately reject the NRA policy proposals that loosen our gun laws and pass a package of sensible federal gun laws similar to what was passed in Connecticut after the Sandy Hook tragedy in a bipartisan manner.

“Just one month ago, the NRA-supported Sportsmen’s Heritage and Recreational Enhancement Act (SHARE Act) was introduced in the House of Representatives. This act would deregulate silencers, making them readily available without background checks at gun shows and on the Internet. We implore all members of House of Representatives to reject the SHARE act and instead pass laws that require background checks for sale of all guns; ban assault weapons and high capacity magazines; repeal the legal shield for the gun industry; and adequately fund federal gun violence research. Congress must also reject any effort by the NRA to allow gun owners from states with poor permitting laws to carry their concealed weapons in other states.

“Over 500,000 Americans have been killed or injured by guns since the Sandy Hook shooting tragedy. The Las Vegas massacre was the 272nd American mass-shooting incident in 2017. Too many Americans are getting killed in public spaces. Until our federal gun laws are strengthened, we are all vulnerable to becoming victims of gun violence in our country. We encourage all Americans to demand action from their congressional representatives by calling them at 202-224-3121.”

Newtown, CT, October 2, 2017 – This morning we woke to learn about what is now the deadliest mass shooting in U.S. history. A shooter opened fire at the Route 91 Harvest Festival in Las Vegas, NV, killing at least 58 people and injuring more than 500 others. There are no words to describe the sadness and pain we feel with the news of yet another horrific mass shooting that has claimed innocent lives and left loved ones devastated by loss, their lives forever changed. We stand with the victims’ families and survivors and are ready to give them support and compassion as they navigate the difficult path ahead.

Gun violence is far too common in our country – destroying lives, families and communities. Though we can take action to prevent this, most people don’t and that inaction leads to more death. How much longer can we accept this as part of life in America? Days like today remind us how quickly life can change, but regardless we should always expect to be safe at a concert, a movie, at church, and in school.

Nobody is born evil. Nobody is born a killer. They are influenced by the environment around them, and sadly, turn to violence when fear and anger become too much to manage. Just as environment can create killers, it can also prevent them from ever reaching that point. It is for this very reason that we must create and pass policy and programs that identify and intervene on individuals before they become killers.

Over the past five years, we have witnessed how we generally respond (or don’t) as a country to mass shootings like Las Vegas. It’s usually a cyclical conversation, starting with debate between banning assault weapons or arming more Americans, moving then to a focus on mental illness and “good guys vs bad guys” and finally to policy proposals that may relate directly to what occurred, but possibly not, and no federal legislation changes will pass. By the end of next week this story will be almost gone as if it never happened, even while those most impacted are still reeling from shock and grief.

We are asking Americans, in the name of these victims and to protect those still living, do something – let’s move from rhetoric and focusing on just “the gun” to more focus on “the shooter” and steps we can be taking as a country to identify and stop them before it’s too late.

What can you do now?

1. Help pass federal and state policy: We need policy that will help us intervene with identified at-risk individuals and ensure they are prevented from accessing or purchasing firearms until they are deemed fit. This includes sensible legislation like Extreme Risk Protection Orders.

2. Learn the Signs of Violence: We need programs and training to help people know what to look for and understand the signs given off by at-risk individuals. We need to teach people how to intervene and get help, so that legislation can be enforced effectively. Typically, although more information is needed on this tragic event, mass shooting are planned in advance, usually for around six months or more. It is highly likely in the case of the Las Vegas shooter that there were plans and missed signs.

4. Get involved: Most people don’t think about gun violence prevention before something happens to their family or to their community. We need people to understand that doing nothing is not a choice, especially when the actions they can take are so easy – from calling on their legislators to take action. bringing the training to their schools and community, and/or getting involved with a gun violence prevention organization.

We need politicians in D.C. and our states to show leadership and take action. Today IS the time to have these conversations if we are going to prevent the shootings of tomorrow. Inaction leads to more Americans dying.

We must put aside our differences and focus on our shared values, community and common humanity. We must all stand together to take real action and work for an end to gun violence and create a safer America.

Our hearts are with the families and community of Las Vegas during this difficult time. We wrap our arms around them as they deal with the pain and sorrow today, and in the days and years to come. We promise we will continue to take action to prevent tragedies and ask all other Americans to make that same promise, and then take action to deliver.

Newtown Action Alliance is an all-volunteer grassroots organization founded by Newtown residents after the tragic December 14, 2012 Sandy Hook Elementary School shooting where 20 children and six educators were senselessly gunned down. We are a group of advocates, families of victims and survivors of gun violence, who are working to transform our tragedy into meaningful action to end gun violence. We are dedicated to reversing the escalating gun violence epidemic in this nation through the introduction of smarter, safer gun laws and broader cultural change. Membership is open to anyone who wants to help make this nation a safer place for our families and children.

Sandy Hook Promise (SHP) is a national, nonprofit organization based in Newtown, Connecticut. We are led by several family members whose loved ones were killed in the tragic mass shooting at Sandy Hook Elementary School on December 14, 2012 that claimed the lives of 20 first-graders and 6 educators. SHP is focused on preventing gun violence (and other forms of violence and victimization) BEFORE it happens by educating and mobilizing youth and adults on mental health and wellness programs that identify, intervene and help at-risk individuals. SHP is a moderate, above-the-politics organization that supports sensible non-policy and policy solutions that protect children and prevent gun violence. Our intent is to honor all victims of gun violence by turning our tragedy into a moment of transformation. For more information, visit www.sandyhookpromise.org or call 203-304-9780.