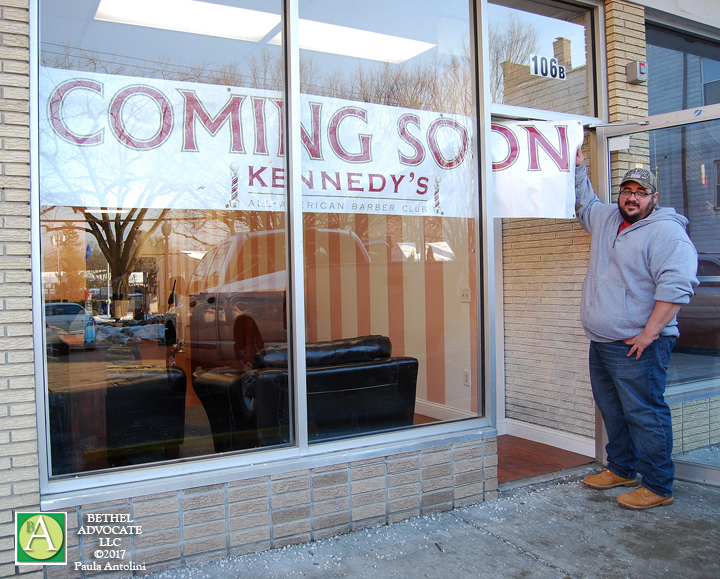 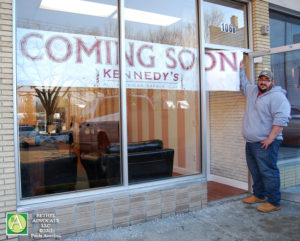 On Wednesday, February 15, 2017, Bethel Advocate spotted new business owner Jarrod Manfro moving items into his new location, preparing to open “Kennedy’s All-American Barber Club” at 106B Greenwood Avenue in Bethel, CT (in P.T. Barnum Square) with partner Petie Grosso, and we got a sneak peek.  He said they  expect to open the business in “about a month” after some major renovations are completed.

Manfro said the barber club will be “high end,” mostly catering to men but also for women wishing to obtain a certain style of haircut too, he said.  They plan on offering old-fashioned style single-razor shaves for men with hot towels placed on the face, in relaxing, specially created black leather reclining barber chairs he already had placed in the establishment.

The decor will be reminiscent of a men’s library or smoking club (without the smoking) with dark wood wainscoting replacing the pink and white striped wall that is presently there, which will match the dark wood furnishings planned for the club. As we entered the front door we noticed the comfy black leather sofas in the waiting area, giving it a lounge type feel.
When we asked Manfro if he was aware there were two other barber shops located close by, one in P. T. Barnum square near School Street and the other at the intersection of Greenwood Avenue and Depot Place, he said yes he knew, but that his shop was going to be a lot different than theirs, more of a club atmosphere.

We look forward to the grand opening ribbon cutting ceremony soon!  Check back when we will post the announcement of the exact date.