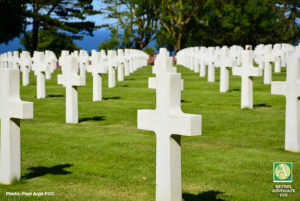 Sen. Boucher: On D-Day, We Must Honor Those Brave Soldiers And What They Fought For

On D-Day, June 6th, we remember the Battle of Normandy. We remember the many sacrifices that led to victory and how it relates to our freedoms

We should teach our children about the importance of this day. The soldiers that landed on the beaches of Normandy fought a bloody battle and thousands died. The picture above is one of the many cemeteries in Normandy where those soldiers are buried. Their sacrifice led to the beginning of the end of WWII.

It’s important to teach our children that the Allied forces did more than liberate Europe. They liberated millions of Jewish people held in concentration camps who were slated for execution.

Lately, I have been disappointed, even angered that the specter of anti-Semitism has surfaced in our state. Particularly disturbing is that some of these incidents have happened at events that are supposed to be positive for our youth. It’s clear our children do not understand the true horrors that were found by our Allied soldiers.

Legislation I helped pass will require schools to teach our high school students about the Holocaust and other genocides. However, I believe we must act now. It is incumbent on us, as adults, to talk to our children about racism and anti-Semitism. We need to teach them how words and small acts can eventually lead to something so much worse.

WWII, the German occupation, and the killing of millions of Jews did not happen overnight. It started with words and small acts of discrimination. It grew into one of the worst horrors the world has ever seen.

On D-Day, we are called to remember and appreciate the sacrifices of the soldiers who truly gave us our freedom. We must remember that they saved millions of lives. That they put an end to the systematic torture and murder of people who were targeted simply because of their ethnicity and religion. That they were liberators.

To allow anti-Semitism to emerge in our homes, in our communities would dishonor the memory of those brave soldiers. We cannot permit that to happen. 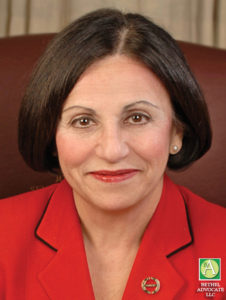 State Senator Toni Boucher was first elected to represent the 26th Senatorial District in 2008, after having served as the State Representative from the 143rd Assembly District for 12 years. The 26th Senatorial District includes the communities of Bethel, New Canaan, Redding, Ridgefield, Weston, Westport and Wilton. Senator Boucher earned leadership roles in both the public and private sectors. Her election to the State Senate followed a distinguished career in the House of Representatives where she held caucus leadership positions and served on several legislative committees.

As a member of the Finance, Revenue & Bonding Committee, Senator Boucher is working to resolve the state’s existing fiscal problems and plan for the future in a bipartisan manner. She believes that Connecticut must recreate a positive tax environment where businesses can grow and families can prosper. Senator Boucher, who served on the Appropriations Committee as a State Representative, is now on the front line of efforts to balance the state’s growing budget deficit while holding the line on taxes, reducing government spending, saving businesses and growing jobs.

Senator Boucher calls on her extensive experience in the business world when working with her legislative colleagues on state government fiscal issues. Senator Boucher, who holds an MBA from UCONN Business School, is the founder and former owner of a small business and a former member of corporate management for two Fortune 50 firms. Senator Boucher also co-founded and served on the Board of Directors of a marketing design agency in San Diego, California, which specializes in clients working in biogenetic, aerospace and leading edge computer applications. She is honored to have been a recipient of the Southwest Area (CT) Commerce and Industry Association’s Community Leader Award.

Currently, Senator Boucher, who holds series 7, 63 and 31 licenses, is the director of a nonprofit fund manager. In December 2008, she co-authored a publication on Ethics and the Nonprofit.