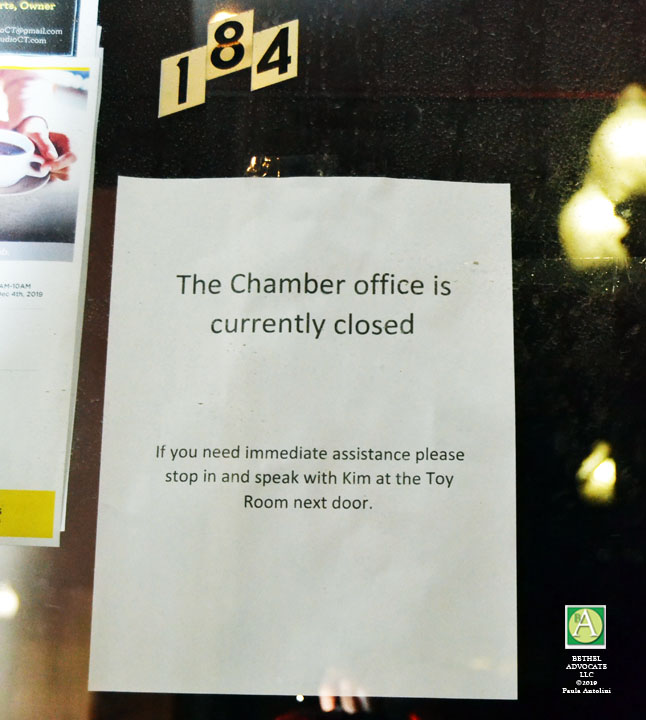 SECRECY in Bethel, Post-Election, is at an All-Time High: Bethel Chamber of Commerce is Closed and Mum, Director ‘Parted Ways’ and No Info. on Winterfest or Display Lottery Selection. What is Going on?

The Bethel Chamber of Commerce is CLOSED and without explanation. No word from Executive Director Bradley (Brad) Koltz, who was hired in August 2018. Why the secrecy?

So what happened? Chamber officials are not talking.

Ramsey did say that chamber board members Pat Rist (of the Bethel Historical Society), Mohammed Shilleh (of Royal Choice Global Transportation) and herself, Kimberly Ramsey (of the Toy Room) are handling the details for the November 29th “Winterfest.”

We also tried reaching out to the Bethel Chamber of Commerce present Chairman of the Executive Board, Kristen Keil, at her place of business People’s United Bank this week, and for several days in a row we were told she is not in the office, that she roams to several branches, and they do not know which branch she is in at moment. Messages left for her went unanswered.

We contacted First Selectman Knickerbocker after 9:00am on November 7, 2019, via phone, asking him to comment on three issues. Dionne Craig said he was “in a meeting” and took our message. We also left a text message asking him to call when he could. Knickerbocker would only answer us in a text, despite us asking him to return our call, at first saying, “Yes I’m busy at the moment with something, can it wait about 15 minutes?” We said, “Yes,” and asked him to give us a call when he had the time. He then texted at 12:50pm, “Have not had a minute, what’s the topic?”

On the first issue, when we asked Knickerbocker to tell us what the status was of the Bethel Chamber of Commerce, and if he could confirm why the chamber is presently closed, and also questions about Executive Director, Bradley (Brad) Koltz (who has not posting anything on the chamber Facebook page since October 26, 2019, and we are wondering where he is), and Knickerbocker said, “No comment on Chamber of Commerce business.”

On the second issue, we asked Knickerbocker for information as to whether or not the “Winterfest” will take place this year on the day after Thanksgiving, November 29, 2019, as it usually had, and he would only reply in a text, “Yes the fest is usually the Friday after Thanksgiving, but that is a chamber event. I do not know what their plans are.”

We know the chamber is a non-profit company but you would think the First Selectman would be concerned about a company that represents Bethel and its businesses and holds numerous networking meetings often, to try and draw in business to Bethel, and also be concerned about one of the largest events enjoyed by residents during the holidays. But no, First Selectman gave no information about the “Winterfest” and the Bethel Chamber of Commerce seems unreachable at the moment.

Should residents be worried?

We finally got an email reply from Bethel of Commerce Executive Director Kristen Keil on Nov. 7th that reads:

“The Chamber, Board and its Executive Director have decided to part ways. The Chamber will continue under the leadership of the dedicated volunteers on the Board of the Directors and the faithful volunteers in our community.

“We look forward to continuing the mission of the chamber with the support of the community, the town and local businesses.

Our third question to Knickerbocker was asking when the next Board of Selectman meeting will take place this month since the November 5, 2019 meeting had been canceled. We also asked if the religious display lottery (involving P.T. Barnum Square) would be discussed at that next meeting. This is after we spoke to Eileen Earle at Bethel Parks and Recreation, who confirmed that there were 5 applications submitted, but we needed to speak to the First Selectman about the issue and decisions.

So the secrecy continues, as the town officials are permitted to give only 24 hours notice to the public for a “Special Meeting” and apparently they might very well take advantage of that aspect.

On such an important issue that involves the beloved central display of the Nativity, and other displays that might be extremely controversial, why aren’t Bethel residents being told what is happening in a timely manner, so they can plan to attend the BOS meeting and give public input, with sufficient time to plan that?

Why do Bethel residents appear to not be very concerned about the Bethel Chamber of Commerce officials and Bethel government officials not being forthcoming about details that will ultimately affect the welfare of our businesses and community? They just close the doors of the Bethel Chamber of Commerce and say nothing? And the Executive Director Brad Koltz is no longer there?

Why isn’t First Selectman informed and concerned? Why isn’t he trying to research these issues?

Many questions. Get involved. This is your community, your businesses (for owners), and your holiday season!

Tags: Bethel Advocate Bethel Chamber of Commerce is Closed and Mum Bethel Connecticut bethel ct betheladvocate.com Brad Koltz Bradley Koltz No Info. on Winterfest or Display Lottery Selection Paula Antolini SECRECY in Bethel Post-Election is at an All Time High What is Going on