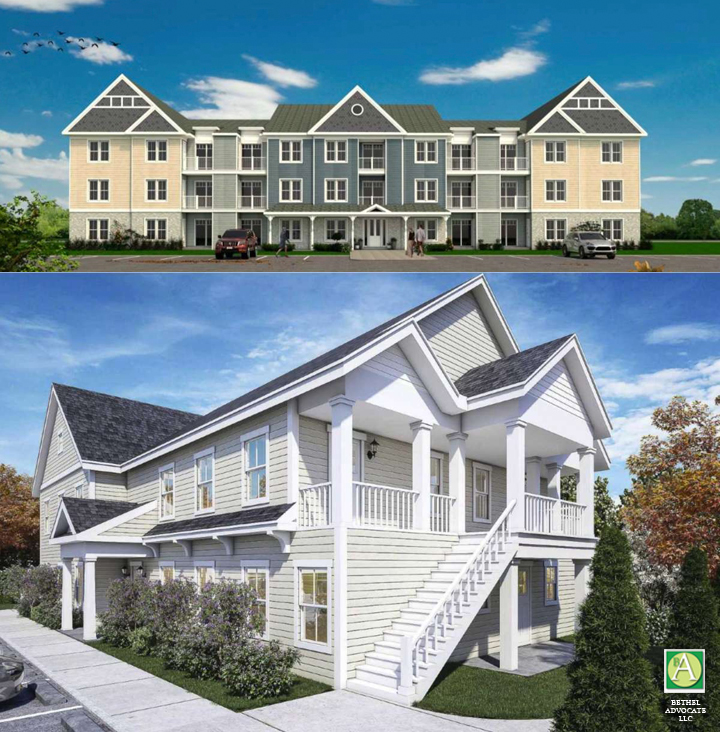 More multiple-unit buildings are proposed in Bethel by developers, one 26-unit building to be built behind the “Grand” on Grand Street near Dolan Plaza and the other an 8-apartment building behind a house at 10 Wooster Street, and more.

This development pertains to Bethel’s “Transit Oriented Development” (TOD) plan, based on a study that was done called “Bethel Forward” in 2015, is an idea to promote more “walkable streets, enable active transportation, promote environmental quality, enhance economic development and create safer and more livable communities. This is based on set of principles where streets are designed to enable safe and convenient access and travel for all users: pedestrians, bicyclists, and motorists.”

Discussion at the August 13, 2019 Planning & Zoning Commission also included a project proposal by “NLP Real Estate” which was a “Preliminary Review” of an “Extended Stay Lodging” project at 53 Stony Hill Road. L. Patel, Mgr., NJP Real Estate and H. Kurfehs, Coldwell Banker Real Estate appeared before the Commission for this review. A general discussion ensued pertaining to ” Use” with regard to the differences between ‘hotel’ and ‘extended stay lodging’. Mr. Patel responded to questions from the Commission.

There was also discussion regarding a project proposal for “Pre-Application Review/Site Plan/new construction / 8 units” at 10 Wooster Street, by “Ten Wooster, LLC” . T. Tarlton, Ten Wooster, LLC, Danbury, and Lynn Persen, Architect appeared before the Commission. A discussion ensued regarding potential landscaping, plantings, parking and driveway for the subject property at 10 Wooster Street. A Public Hearing date is set for 9/10/19 for a Special Permit for parking Reduction and to send out the application to appropriate departments
for review.

We also recently reported on the Caraluzzi’s multi-phased redevelopment of properties along Greenwood Avenue adjacent to the Caraluzzi’s Bethel Market, which is in progress.

The new building will be incorporated into the overall shopping center of the Bethel Market, greatly improving the aesthetics of the streetscape and creating a more cohesive and convenient shopping environment.

The second phase of the development involves a very small addition of the supermarket by only 1,125 square feet. However more importantly, it rearranges the loading area from the front of the building to the left side and creating a much safer parking lot along with beautifying the visible portions of the building.

Plans also include improvements to the supermarket façade as well as along Greenwood Avenue to enhance the streetscape and overall architectural attractiveness of the building.

As part of the proposal it included zone changes for three properties on South Street from RM-O to VC, which is consistent with the Plan of Conservation Development and with the goals of the TOD and village center district.

Three existing houses would be taken down in order to accommodate the zone change however three new single family homes are being proposed to be built in the revised zone. Tenants of the three houses will have ample notice and they plan to work with them to find other locations which could be in one of the other properties or in the new building proposed on Greenwood Avenue.

Additionally, a change to the exit driveway would create a safer grade to the driveway as well as the addition of a pedestrian sidewalk which one does not exist today. No changes to the traffic flow from the South Street exit are anticipated as a result of the project. Landscaping plans include tasteful buffers to maintain a separation between residential and commercial spaces.

The P&Z meeting also included a plan for a 77 South Street/Walkway Proposal. In response to a” Formal Request” from C& S Cornerstone Properties, LLC dated 7/30/19 to the Board of Selectmen, the Commission came to a consensus to express their support for the request to connect South Street to Elizabeth Street by the use of a direct sidewalk and that the
Town of Bethel submit the application to the MTA applying for occupation of the land needed for the sidewalk, and maintain the annual MTA lease and ongoing maintenance.

The August 13th P&Z meeting also included the Planning & Zoning Department report “POCD Draft.” Beth Cavagna provided each Commission member present with a Draft Copy of “Town of Bethel, Plan of Conservation and Development” Prepared for: The Town of Bethel Planning and Zoning Commission with assistance from Milone & MacBroom” for their review.