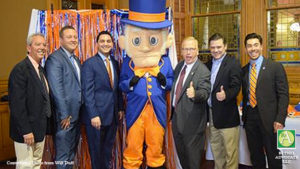 Hartford – Danbury legislators gathered at the Capitol April 12, to honor two local couples for their contributions to the Danbury community. Citations from the Connecticut General Assembly were presented to the couples during the annual Danbury Day celebration.

Rep. Godfrey said Bob and Lynn Taborsak have both served as members of the Danbury City Council. Lynn Taborsak was a state representative when Rep. Godfrey was first elected to represent the city in Hartford, and previously served as the President of the Connecticut National Organization of Women. Bob Taborsak is a former educator and well-known high school track coach who also served on the Danbury Board of Education.

Sen. McLachlan said Bob and Judge Dianne Yamin are active members of the Danbury Lion’s Club and St. Anthony Maronite Church, among other civic and charitable organizations. Judge Yamin has served as a Judge of Probate since 1990 and is a past President-Judge of Connecticut Probate Assembly. Bob Yamin is Corporation Counsel and Chief Legal Officer of the City of Danbury and a member of the Danbury Lebanon American Club.

“Danbury is fortunate to have the Yamins as members of our community. There are so many things they do individually and as a couple in their philanthropic and charitable activities,” Sen. McLachlan said. “It is the efforts of people like the Yamins and the Taborsak that makes Danbury such a wonderful place.”

In addition to honoring exceptional citizens, Sen. McLachlan said Danbury Day gives legislators a chance to shine a light on the community named Connecticut’s Most Livable City by 24/7 Wall Street.

Rep. Duff said, “What a fun day at the State Capitol celebrating Danbury. I am thrilled we were able to highlight our great city to the rest of the General Assembly. It’s a day of pride and a celebration of our diverse culture.”

As the youngest member of the Danbury delegation, Rep. Ferguson worked with the city and school district to organize the annual event. In addition to featuring fair food, it honored the Yamins and the Taborsaks for being outstanding community members. Three Danbury school principals who lead schools recently named as “Schools of Distinction” by the State Department of Education were also honored.

“There is nothing like showing the whole state what an amazing place Danbury is. I am proud to have been born, raised, and educated in Danbury and have the honor of representing my hometown in the General Assembly. It is a true privilege to be the voice of our city.”

“It was wonderful to celebrate the City of Danbury with my legislative colleagues today,” Rep. Harding said. “I am proud to have the great city as part of my district and continue to be impressed with its vibrancy as well as the talented and dedicated men and women that call Danbury home.”

“I have known both Bob and Judge Yamin for many years and have always been impressed by their dedicated service to our community, so I enjoyed this opportunity to call attention to their achievements,” said Rep. Smith. “It was my honor to be a part of the celebration on Danbury Day at the State Capitol to recognize the Yamins as well as Bob and Lynn Taborsak for their admirable civic and charitable work. We could use a lot more people like them.” 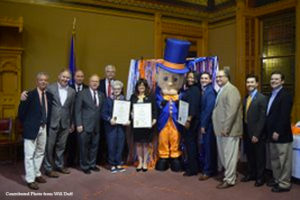