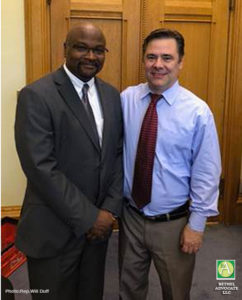 Rep. Duff had the opportunity to meet new Chief Justice Robinson during a Connecticut Legislative Black and Puerto Rican Caucus gathering earlier in the week.

Justice Robinson is a 61-year-old African-American Stamford native who was corporate counsel for the City in the 1990s. He’s been on the Connecticut bench since 2000. First as a Superior Court judge, then in 2007 he was elevated to the State Appellate Court. In 2013 Robinson was nominated and confirmed the State Supreme Court.

Justice Robinson fills the seat that was most recently held by Chief Justice Chase T. Rogers, who retired from the bench in February.

Rep. Will Duff is a member of the legislature’s Black & Puerto Rican Caucus.