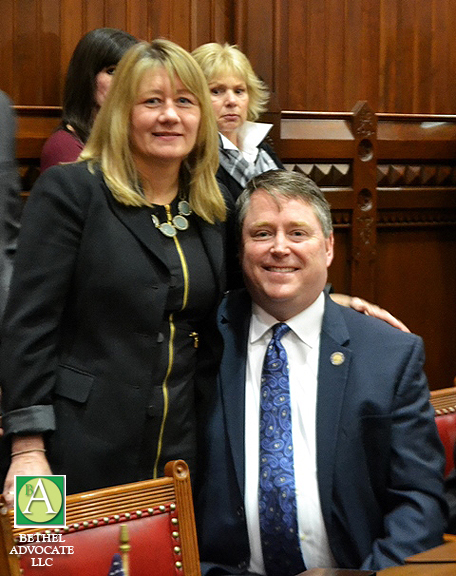 Rep. Dan Carter Commemorates the Opening of the 2016 Legislative Session 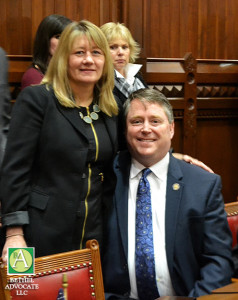 Photo above: Dan Carter and his fiancee Jane McBride in the Legislative Chamber in Hartford’s Capitol.

Rep. Dan Carter Commemorates the Opening of the 2016 Legislative Session

This three month “short” session, however, is unique as it occurs biannually and only allows legislator-proposed bills related to budgetary, revenue and financial matters to be considered. Committees, on the other hand, can submit bills to be considered on any subject.

Rep. Carter will continue to serve as Ranking Member on the General Law Committee, and member of the Education and Finance, Revenue, and Bonding Committees.

One of the most critical issues facing the General Assembly is making adjustments to the state’s biennial budget. After a budget fix during the December special session, there is still a projected shortfall of over $507 million, and an out year deficit of over $4 billion.

“We are facing a fiscal crisis like never before. If the Governor is true to his word, we may be able to reign in the ridiculous spending and taxes imposed by the legislature,” said Rep. Carter. “If not, we will continue to face unnecessary financial hardships brought on by those who have decided to put politics over leadership.”

On Monday, House and Senate Republicans released their budget priorities for the 2016 session, which include:

Constituents can follow committee meetings and House debates as they unfold live on Connecticut’s public affairs television network, CT-N, or by streaming the proceedings online by visiting www.ctn.state.ct.us.

Rep. Carter can be reached at Rep.Carter@housegop.ct.gov  or 800-842-1423. Constituents can follow his legislative endeavors by logging onto www.repcarter.com or by connecting with him on Facebook at www.facebook.com/repcarter.

The session will adjourn at midnight on May 4th.