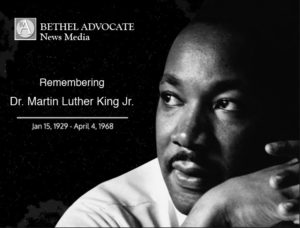 During the less than 13 years of Dr. Martin Luther King, Jr.’s leadership of the modern American Civil Rights Movement, from December, 1955 until April 4, 1968, African Americans achieved more genuine progress toward racial equality in America than the previous 350 years had produced. Dr. King is widely regarded as America’s pre-eminent advocate of nonviolence and one of the greatest nonviolent leaders in world history.

Drawing inspiration from both his Christian faith and the peaceful teachings of Mahatma Gandhi, Dr. King led a nonviolent movement in the late 1950’s and ‘60s to achieve legal equality for African-Americans in the United States. While others were advocating for freedom by “any means necessary,” including violence, Martin Luther King, Jr. used the power of words and acts of nonviolent resistance, such as protests, grassroots organizing, and civil disobedience to achieve seemingly-impossible goals. He went on to lead similar campaigns against poverty and international conflict, always maintaining fidelity to his principles that men and women everywhere, regardless of color or creed, are equal members of the human family.

Dr. King’s “I Have a Dream” speech, Nobel Peace Prize lecture and “Letter from a Birmingham Jail” are among the most revered orations and writings in the English language. His accomplishments are now taught to American children of all races, and his teachings are studied by scholars and students worldwide. He is the only non-president to have a national holiday dedicated in his honor, and is the only non-president memorialized on the Great Mall in the nation’s capitol. He is memorialized in hundreds of statues, parks, streets, squares, churches and other public facilities around the world as a leader whose teachings are increasingly-relevant to the progress of humankind.

Some of Dr. King’s most important achievements include:

–In 1955, he was recruited to serve as spokesman for the Montgomery Bus Boycott, which was a campaign by the African-American population of Montgomery, Alabama to force integration of the city’s bus lines. After 381 days of nearly universal participation by citizens of the black community, many of whom had to walk miles to work each day as a result, the U.S. Supreme Court ruled that racial segregation in transportation was unconstitutional.

–In 1957, Dr. King was elected president of the Southern Christian Leadership Conference (SCLC), an organization designed to provide new leadership for the now burgeoning civil rights movement. He would serve as head of the SCLC until his assassination in 1968, a period during which he would emerge as the most important social leader of the modern American civil rights movement.

–In 1963, he led a coalition of numerous civil rights groups in a nonviolent campaign aimed at Birmingham, Alabama, which at the time was described as the “most segregated city in America.” The subsequent brutality of the city’s police, illustrated most vividly by television images of young blacks being assaulted by dogs and water hoses, led to a national outrage resulting in a push for unprecedented civil rights legislation. It was during this campaign that Dr. King drafted the “Letter from a Birmingham Jail,” the manifesto of Dr. King’s philosophy and tactics, which is today required-reading in universities worldwide.

–Later in 1963, Dr. King was one of the driving forces behind the March for Jobs and Freedom, more commonly known as the “March on Washington,” which drew over a quarter-million people to the national mall. It was at this march that Dr. King delivered his famous “I Have a Dream” speech, which cemented his status as a social change leader and helped inspire the nation to act on civil rights. Dr. King was later named Time magazine’s “Man of the Year.”

–In 1964, at 35 years old, Martin Luther King, Jr. became the youngest person to win the Nobel Peace Prize. His acceptance speech in Oslo is thought by many to be among the most powerful remarks ever delivered at the event, climaxing at one point with the oft-quoted phrase “I believe that unarmed truth and unconditional love will have the final word in reality. This is why right temporarily defeated is stronger than evil triumphant.”

–Also in 1964, partly due to the March on Washington, Congress passed the landmark Civil Rights Act, essentially eliminating legalized racial segregation in the United States. The legislation made it illegal to discriminate against blacks or other minorities in hiring, public accommodations, education or transportation, areas which at the time were still very segregated in many places.

–The next year, 1965, Congress went on to pass the Voting Rights Act, which was an equally-important set of laws that eliminated the remaining barriers to voting for African-Americans, who in some locales had been almost completely disenfranchised. This legislation resulted directly from the Selma to Montgomery, AL March for Voting Rights lead by Dr. King.

–Between 1965 and 1968, Dr. King shifted his focus toward economic justice – which he highlighted by leading several campaigns in Chicago, Illinois – and international peace – which he championed by speaking out strongly against the Vietnam War. His work in these years culminated in the “Poor Peoples Campaign,” which was a broad effort to assemble a multiracial coalition of impoverished Americans who would advocate for economic change.

–Dr. Martin Luther King, Jr.’s less than thirteen years of nonviolent leadership ended abruptly and tragically on April 4th, 1968, when he was assassinated at the Lorraine Motel in Memphis, Tennessee. Dr. King’s body was returned to his hometown of Atlanta, Georgia, where his funeral ceremony was attended by high-level leaders of all races and political stripes.

–For more information regarding the assassination trial of Dr. King. Click here.

–For more information regarding the Transcription of the King Family Press Conference on the MLK Assassination Trial Verdict December 9, 1999 Atlanta, GA. Click Here.

–For more information regarding the Civil Case: King family versus Jowers. Click here.

For More Information Contact: Barbara Harrison at (404) 526-8900 or bharrison@thekingcenter.org

6:00 PM – 8:00 PM
BELOVED COMMUNITY TALKS:
LET’S BRIDGE THE RACIAL DIVIDE ACROSS URBAN, SUBURBAN AND RURAL AMERICA
The King Center, The Yolanda D. King Theatre For The Performing Arts –
FREE & Open to the Public
This signature event will take place before a live audience, and streamed via Facebook and promoted across national media and major social media channels.
“I am convinced that men hate each other because they don’t know each other, and they don’t know each other because they don’t communicate with each  other, and they don’t communicate with each other because they are separated from each other.”
-MLK address to Cornell College 1962
In keeping with Dr. King’s assertion that people are divided because we are disconnected, The King center launched, via the Beloved Community Talks (BCT)
platform, a two year campaign on the 2017 King Holiday Observance, Let’s Bridge the Racial Divide across Urban, Suburban, and Rural America. The King Center will continue the campaign on the 2018 King Holiday. Our goal is to provide the road map and tools necessary for individuals and communities to have the challenging and courageous conversations to bridge the racial divide in America by addressing the pains and unrest of racism rooted in a historical context.
The campaign will be a national catalyst to heal the disconnect between people of America from different ideological, cultural, socioeconomic and geographic backgrounds. We know that these courageous conversations will not solve all matters regarding racism, but we do believe it is a step in the right direction of closing the divide and creating an understanding.
The 2018 Beloved Community Talks will take place on the King Holiday Observance, January 15, 2018 from 6 to 8:30PM Eastern, and will be streamed from The King Center in Atlanta, Georgia. This BCT deal specifically with the “role of men” in bridging the racial divide.
Moderator: John Gray – Pastor & Author.
Confirmed Conversationalist: Pastor Mike Hayes – Founder of
Covenant Church.
Dr. Raphael Warnock – Pastor of Ebenezer Baptist Church.
Rev. Robert W. Lee, IV, – Descendant of Confederate General Robert E. Lee.
Daryl Davis – Musician, author, lecturer, actor and racerelations expert.
Scott Shepherd – Former Grand Wizard, KKK.
Bishop Harry Jackson – Pastor of Hope Christian Church.
Jaime Harrison, Chair of South Carolina Democratic Party.
Randy Evans, Partner at Dentons LLP, and presidential selection to be next
Ambassador to Luxembourg

For More Information Contact Barbara Harrison at (404) 526-8900 or bharrison@thekingcenter.org