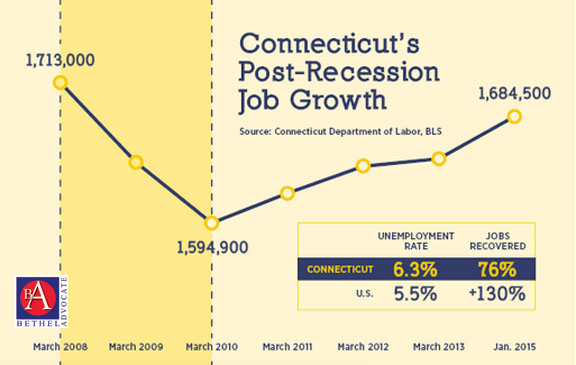 Economic recovery concerns persist in Connecticut, with the state still trailing the national economy after posting 25,100 new jobs in 2014.

“This report confirms moderate job growth but it still highlights concerns that Connecticut has a long way to go to catch up to our neighbors and U.S. job performance overall,” said CBIA economist Pete Gioia.

Gioia noted that while Connecticut’s economy is poised for growth, legislative proposals weakening tax credits for research and development and fixed capital investments posed “a significant threat to our economic recovery.”

Between 2000 and 2012, Connecticut businesses transformed $109 million worth of R&D tax credits into $3.14 billion worth of investments in the state’s economy.

And, from 2001 to 2012, companies used $724 million in fixed capital tax credits to produce over $14 billion worth of investments.

Both of those programs are among a number of key economic drivers that are under threat in the legislature as lawmakers debate the state’s next two-year budget.

The state labor agency today also released preliminary estimates for January, saying the state gained 6,400 jobs for the month while the unemployment rate remained unchanged at 6.3%, where it has been since September last year.

The national unemployment rate is 5.5%.

That sector has now added 9,200 jobs over the last 12 months, the strongest showing of all sectors.

Leisure and hospitality and professional business services both gained 2,100 new jobs in January, followed by financial activities (1,500); construction and mining (1,300); and government (900).

Trade, transportation, and utilities shed 3,000 jobs in January, with retail trade accounting for all losses following the holiday season.

The Connecticut Business & Industry Association (CBIA) is the largest, most representative business organization in the state. Our members include businesses of all sizes from nearly all industries in Connecticut. We are the leading voice at the State Capitol and before regulatory agencies for policies that promote Connecticut’s economic growth, a fiscally responsible state government, and a dynamic business climate.

CBIA believes that a healthy economy depends on a strong business climate, on whether employers, employees, and their families feel confident that Connecticut is a place where they can succeed and grow. Only a healthy economy can provide the wealth of benefits that our families and communities need, from good jobs and wages to the opportunity for a better quality of life. And only a healthy economy can generate the tax revenue that enables state and local government to provide good schools for our children and critical social services for our neediest citizens.