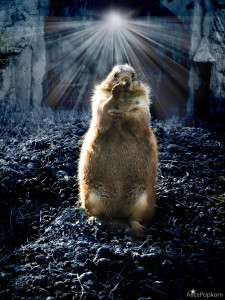 To view past vintage photos from groundhog.org, click here.

Today, February 2, 2015, is Groundhog Day. Punxsutawney Phil saw his shadow and predicted 6 more weeks of winter. See the history below.

Every February 2, thousands gather at Gobbler’s Knob in Punxsutawney, Pennsylvania, to await the spring forecast from a special groundhog. Known as Punxsutawney Phil (link is external), this groundhog will emerge from his simulated tree trunk home and look for his shadow, which will help him make his much-anticipated forecast. According to legend, if Phil sees his shadow the United States is in store for six more weeks of winter weather. But, if Phil doesn’t see his shadow, the country should expect warmer temperatures and the arrival of an early spring.
History of Groundhog Day

Groundhog Day, February 2nd, is a popular tradition in the United States. It is also a legend that traverses centuries, its origins clouded in the mists of time with ethnic cultures and animals awakening on specific dates. Myths such as this tie our present to the distant past when nature did, indeed, influence our lives. It is the day that the Groundhog comes out of his hole after a long winter sleep to look for his shadow.

If he sees it, he regards it as an omen of six more weeks of bad weather and returns to his hole.

If the day is cloudy and, hence, shadowless, he takes it as a sign of spring and stays above ground.

The groundhog tradition stems from similar beliefs associated with Candlemas Day and the days of early Christians in Europe, and for centuries the custom was to have the clergy bless candles and distribute them to the people. Even then, it marked a milestone in the winter and the weather that day was important.

According to an old English song:

If Candlemas be fair and bright,
Come, Winter, have another flight;
If Candlemas brings clouds and rain,
Go Winter, and come not again.

According to an old Scotch couplet:

If Candlemas Day is bright and clear,
There’ll be twa (two) winters in the year.

Another variation of the Scottish rhyme:

The Roman legions, during the conquest of the northern country, supposedly brought this tradition to the Teutons, or Germans, who picked it up and concluded that if the sun made an appearance on Candlemas Day, an animal, the hedgehog, would cast a shadow, thus predicting six more weeks of bad weather, which they interpolated as the length of the “Second Winter.”

Pennsylvania’s earliest settlers were Germans and they found groundhogs to in profusion in many parts of the state. They determined that the groundhog, resembling the European hedgehog, was a most intelligent and sensible animal and therefore decided that if the sun did appear on February 2nd, so wise an animal as the groundhog would see its shadow and hurry back into its underground home for another six weeks of winter.
The Germans recited:

For as the sun shines on Candlemas Day,
So far will the snow swirl until the May.

This passage may be the one most closely represented by the first Punxsutawney Groundhog Day observances because there were references to the length of shadows in early Groundhog Day predictions.

Groundhog Day – Half your hay.

New England farmers knew that we were not close to the end of winter, no matter how cloudy February 2nd was. Indeed, February 2nd is often the heart of winter. If the farmer didn’t have half his hay remaining, there may have been lean times for the cows before spring and fresh grass arrived.

The ancient Candlemas legend and similar belief continue to be recognized annually on February 2nd due to the efforts of the Punxsutawney Groundhog Club.
Growing Fame

From offering support of political events, to rooting for area sports teams, to becoming the star of a Hollywood movie, Punxsutawney Phil has increasingly been in the public eye.

Early observances of Phil’s predictions were conducted privately in the wooded areas that neighbor the town. Today’s celebration sees tens of thousands of visitors from all over the world as revelers await Phil’s appearance as most fans wait to see their favorite rock stars.

The Punxsutawney Spirit newspaper is credited with printing the news of the first observance in 1886 (one year before the first legendary trek to Gobbler’s Knob):

“Today is groundhog day, and up to the time of going to press the beast has not seen his shadow.”