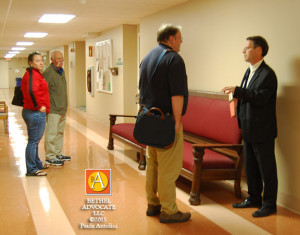 Above photo: Crematorium applicant B. Shawn McLoughlin (2nd from left) and daughter Shelby McLoughlin (far left) stand in the CJH Municipal Center hallway after the crematorium applications were denied by the P&Z on September 22, 2015.  Attorneys for both sides chat after the meeting, applicant’s attorney Peter Olsen (2nd from right) and counsel for Bethel Land Use & the P&Z, (far right) Charles Andres. (BETHEL ADVOCATE file photo ©2015)

Plans for a Bethel Crematorium Go Up in Smoke AGAIN, Judge Decides in Favor of Bethel P&Z, CT Coining

In a long drawn out battle that turned into a court case concerning allowing a crematorium in Bethel, a dispute that lasted several years, a decision was reached on October 4, 2018, in the State of CT Superior Court, to dismiss the appeal of B. Shawn McLoughlin and Mono-crete Step Co. of CT LLC, to allow him to build a crematorium located at 12 Trowbridge Drive, in Clarke Business Park in Bethel, CT.

In an appeals case filed in October 2015 by crematorium applicant (plaintiff) B. Shawn McLoughlin and Mono-crete Step Co. of CT  LLC vs. the Planning & Zoning Commission (P&Z) of the Town of Bethel, Superior Court Judge Marshall Berger has issued a decision upholding the decision of the Bethel P&Z to deny McLoughlin’s special permit application for a crematorium and said there were no improper actions by the P&Z. The appeal has been dismissed.

“Bound by the precedent set in St. Joseph’s High School, Inc. v. Planning & Zoning Commission, supra, 176 Conn. App. 570, the court is constrained to hold that substantial evidence in the record supports the commission’s denial based upon general standards concerning the nature of the use, the welfare of the town, and the harmony with other uses and the orderly development in the district. The plaintiffs have not sustained their burden to prove that the board acted improperly.” Read entire decision here.

The decision of the P&Z also included prevention of any crematoriums in Bethel’s entire IP Zone too, such as Berkshire Corporate Park at 2 Parklawn Drive, Bethel CT.

The crematorium controversy began before the first variance was issued, a variance that would change the Clark Business Park rules to allow a crematorium.

McLoughlin wanted to add the crematorium structure (actually became 2 buildings in later submissions) to the same property where he operates Mono-crete Step Co. LLC, a cement products company, in Clarke Business Park.  The park rules did not allow crematoriums so McLoughlin needed to apply for a variance.

Opposition was heard at the first two P&Z hearings regarding the variance, and the majority of attendees were against the crematorium. Opposing the proposed crematorium were numerous Bethel business owners in Clarke Business Park and also residents, including 40-year nearby Bethel Holbrook Farm owner John Holbrook, all wanting to protect their health and property values and/or businesses.  Some business owners said they’d leave the park if a crematorium were allowed. Despite this outcry from the public the P&Z approve the initial variance.

Approximately four hundred signatures were on a petition opposing the crematorium, that were submitted to the P&Z.  Eventually over 200 people were attending P&Z meetings concerning this topic, meetings that had to be moved to a larger room to accommodate the crowd.

The crematorium issue had been discussed for approximately two years.   There were public hearings on April 14, 2015, May 12, 2015, June 16, 2015, July 15 2015, and July 16, 2015, where the applicant gave testimony, submitted building plans, submitted correspondence from business owners, and brought forth a realtor and a representative of the company from which the applicant was purchasing the crematory equipment, to give testimony and answer questions from the P&Z.  The P&Z also received public comment and correspondence from residents and business owners at these hearings.

P&Z hearings eventually involved lawyers for the plaintiff and also CT Coining Inc. whose owner, Greg Marciano, filed his own lawsuit against McLoughlin, and became a defendant in the case alongside the Town of Bethel.  CT Coining is next door to the proposed crematorium building site, which was on the same property that housed the applicant’s present business Mono-crete Step. CT Coining was also opposed the crematorium, concerned for his business and health of himself and his employees.

On September 22, 2015, the Bethel Planning & Zoning Commission voted to deny the application of B. Shawn McLoughlin and Mono-crete Step Co. of CT LLC, to build a crematorium in Bethel.

The P&Z issued a multi-page document citing the reasons for their decision.  See our previous story for details: “Plans for a Bethel Crematorium Go Up In Smoke, Bethel P&Z Denies All Crematorium Applications.”

In October 2015, McLoughin filed an appeals case in Superior court, saying the P&Z decision illegally denied their application for a crematorium.  Three years later on October 4, 2018, the decision of the court stands, upholding the P&Z’s decision to deny McLoughlin’s application.

No crematoriums will be allowed in Bethel.

No word on whether another appeal will be sought.