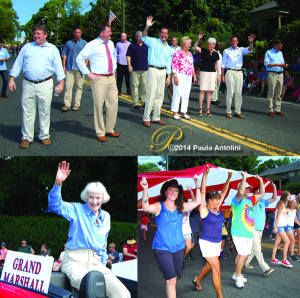 The 53rd Newtown Annual Labor Day Parade took place on September 1, 2014 with scorching 90-degree temperatures and high humidity, but parade watchers gladly attended despite the rain that was predicted. There was a jovial atmosphere as people waited for the parade to begin, with many bringing their own picnic coolers to enjoy treats and beverages while viewing the parade. The parade is the largest Labor Day parade in Connecticut and has been ongoing since 1962.

This year’s parade theme was “Write On, Newtown,” honoring many Newtown authors and illustrators. Sydney Eddison, author of many gardening books, was this year’s Grand Marshal. She rode in a red convertible smiling and waving to the crowd.

Once again, as in past years, the parade included a moving ceremony of a large historical “National Flag” that was unfurled near the flagpole at the top of Church Hill Road and then hand-carried along the parade route by numerous volunteers. The flag spanned across the road, 45-by-90-feet in size, and weighs 300 pounds, said the parade committee president Beth Caldwell.

Marc Valentine of Halifax, Massachusetts, director of The National Flag Truck program, transports the historical flag across the country. This is one of over 20 90-footers, that appears at “Official Affairs of State” and full “Honor” ceremonies, economic summits, and National Re-Dedications. The flag is from the largest collection of giant flags in the world. It is transported aboard the National Flag Truck which was donated by International Truck and Engine and assembled by volunteers at the Springfield, Ohio plant. One day they may want to display it on a monster flagpole for everyone to come and see, but for now, it will go traveling to ceremonies.

High temps did not stop numerous politicians from participating in the parade. Governor Dannel Malloy, Governor Nancy Wyman, Senator Richard Blumenthal, Senator Chris Murphy, Senator John McKinney, State representative Dan Carter, and Newtown First Selectman Pat Llodra, all walked in a line spanning from one side of the road to another, waving to the crowd. Republican gubernatorial candidate Tom Foley also appeared with a host of supporters carrying Foley signs behind him. Senator Michael McLachlan was in the parade and was handing out candy to the children, as was Danbury Mayor Mark Boughton. Congresswoman Elizabeth Esty was also marching in the parade with numerous supporters. Many more candidates and political leaders appeared in the parade.

By mid-parade, cold water was being voraciously consumed by parade spectators to cool off from the heat and water was also handed to parade marchers who happily received the donations and immediately gulped the water to quench their thirst, as they continued along the route.

Also about half way through the parade, a B-17 vintage airplane flew at a low altitude over the parade route, making several passes, and it was quite impressive. Parade president Beth Caldwell said a local citizen who prefers to remain anonymous, piloted the plane.

There was something for everyone, music and dancing, clowns and acrobats, there was even a stilt walker. And of course the Pyramid Shriners did not disappoint with the parade of small cars and a little train too, to the delight of children and adults alike, and the Wells Fargo horses and coach were spectacular. Therapy dogs, pet dogs, ponies and horses, goats, and even roosters, the parade had it all. The Newtown police and fire departments marched and fire engines and tractors completed the parade’s end.