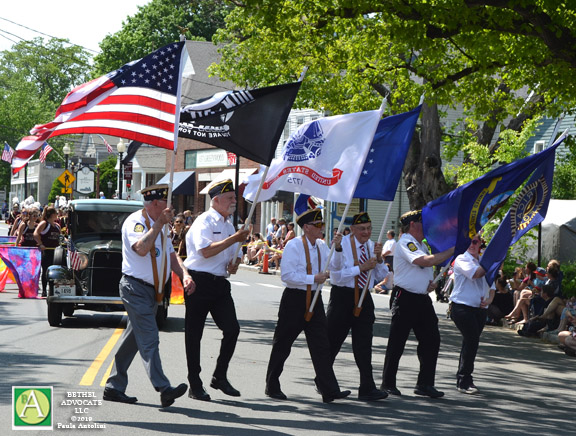 (Scroll to bottom of page for VIDEO of parade.)

It was a beautiful sunny day for the Bethel Memorial Day Parade on May 19, 2019, which brought hundreds of onlookers. We honor our fallen heroes on this day.

Memorial Day is a day on which those who died in active military service are remembered, traditionally observed on May 30 but now officially observed on the last Monday in May.

According to history.org, Memorial Day was first widely observed in May 1868. The celebration commemorated the sacrifices of the Civil War and the proclamation was made by General John A Logan. Following the proclamation, participants decorated graves of more than 20,000 Union and Confederate soldiers.

In years since World War 1, the day has become a celebration of honor for those who died in all America’s wars, as well as those who are Veterans and current members of the US military.

In 1971, Memorial Day was declared a national holiday.

The only thing missing from the parade yesterday was our fire departments, usually at the end of the parade but who were called to two fires at approximately 1:00 p.m., one at the Bethel Middle School and one in the Clarke Business Park. Read our story here.

VIEW PHOTOS OF PARADE BELOW:

VIEW VIDEO OF PARADE BELOW: