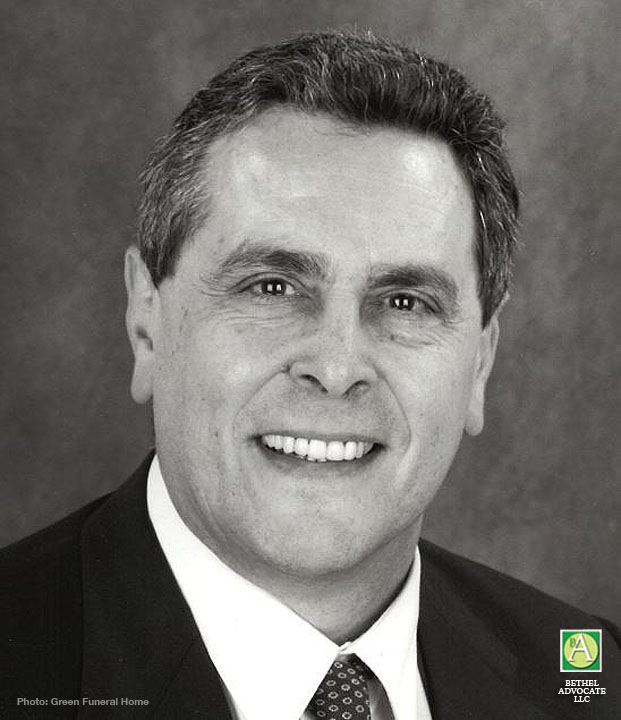 Ed was born in Stamford, Connecticut to Louis Volpintesta and Angelina Serpe on March 24, 1944.

He graduated from St. Basil’s Prep and received his undergraduate degree as an ROTC cadet at St. Michael’s College in Vermont. He studied Medicine at the National Autonomous University of Mexico in Mexico City on sponsorship from Mrs. Margaret Lee Crofts of Stamford. He completed Internships at St. Johns Newfoundland and Stamford Hospitals and did his Residency at Danbury Hospital.

Ed opened his practice Bethel Medical Group in 1975 as a primary care physician where, as a man of Bethel, he warmly served his community for 45 years. Ed showed the importance of the doctor-patient relationship which is listening to patients.

He launched the Primary Care Round Table at Danbury Hospital, serving as its Chairman from 1994 to 2002, and hosted a television program Dr. V on Call that connected medicine and the public from 2008 to 2012.

Ed also served as the chairman of the Fairfield County Medical Association (FCMA) and was a delegate in the House of Delegates of the Connecticut State Medical Society for many years.

Ed was publicly outspoken on many healthcare issues. Over the years, he had published more than 1200 articles, essays, and letters to editors in various medical publications and newspapers, both statewide and nationally. In these forums, Ed remained a steadfast and passionate advocate for patients, colleagues, and quality patient care.

Ed is survived by his wife Nami, his children Robert (wife Erin Shelton), Laura, Emily, Andrew, Michelle (husband Tyler Dickinson), his brothers Frank and Louis, and his grandchildren Lua, Lorenzo, Farrah, Rosa Linda, Rocco, and Angelina. Ed left each of them with a unique, loving touch.

A private Mass of Christian Burial will be held on Monday, January 18th at St. Mary’s in Bethel. A public Graveside Burial service will follow at Bethel Cemetery Elmwood Section in Bethel at approximately 11:00 am.

Ed’s family wishes to extend their sincere thanks to the entire Bethel and Greater Danbury community for their outpouring of love and support at this time. For online condolences and charitable links, please visit www.thegreenfuneralhome.com.

David Rovics’ blog has a beautiful tribute (Reprinted with permission from David Rovics):

Dr. Edward Volpintesta, family doctor to many in Bethel, Connecticut for almost half a century, has died of complications from Covid-19.

There’s a lot else going on in the world right now, but among the forested cul-de-sacs of Bethel, Connecticut, many people are hearing the news, or will be hearing the news soon, that their family doctor has died, of complications from Covid-19.  At 8:56 am Eastern Time, Ed Volpintesta passed away.

Dr. Edward Volpintesta was many things to many people.  If you look him up on Google, you’ll find his address right away.  For 45 years, he practiced family medicine on the main drag, Greenwood Avenue.  He fathered three children, all now well into adulthood, all living nearby, with a total of six grandchildren, several of whom are now young adults themselves.

The mother of those three now middle-aged kids, Christina, married my father, Howard, over three decades ago, and Ed married the woman who is now his widow, Nami, a long time ago as well.  In effect, this ultimately just meant a bigger extended family, on both ends of the generational spectrum, for all the grandchildren that soon came along.  Having somehow ended up far from any extended family, out here on the west coast, raising three children in Portland, I often look east towards Bethel with envy, wishing my children could know all of their many grandparents, aunts, uncles, and cousins, all growing up together there.

I first met Ed when I was a child.  From then until the present, from my own vantage point as the son of the man who would marry Ed’s ex-wife, Ed was always warm, kind, and supportive, always the definition of a gentleman, particularly when many people might expect something different.

For me and many others, he was always the doctor in the family, if ever there was need of one.  Which, for me, as a young itinerant hippie passing through or nominally living in Connecticut or somewhere nearby, meant regularly taking advantage of this relationship to help various girlfriends get refills on essential prescriptions like birth control pills, and to treat the various sorts of maladies that tended to accompany Grateful Dead concerts.

I’m going on memory here, but I’m pretty sure Ed was the first in his family line of poor Italian immigrants to become a doctor.  At the time he wanted to study medicine, there was the opportunity to go to medical school in Mexico more or less for free, in exchange for serving the public in Mexico after you graduate.  Unfortunately, the system for using the doctors who graduated to serve the public was such a bureaucratic mess that they had Ed sitting around most of the time instead of taking care of people, which drove him bonkers, but that’s where he studied medicine, anyway, and where he and Christina began raising children together.

Ed started practicing medicine in Bethel in the 1970’s, and stopped in 2020.  When he stopped practicing medicine, in February, 2020, he wrote in the local newspaper how he was just fed up with all the electronic record-keeping that was becoming more and more of a burden in the profession.  He participated actively in online forums on this and other subjects related to being a good doctor.  Snooping around on the web, I just learned he had a local cable show, answering questions people wanted to ask a doctor about.  No doubt there’s a whole lot more I didn’t know about Ed.  I didn’t know him well, which is why I can write about him like this, so soon after his death.

Ed was very active until he got sick a couple of weeks ago.  We had, in fact, just become Facebook friends for the first time, only weeks before he went into the hospital.  In retirement, he seemed to be getting a bit more active on social media, which, of course, is where we go to look at pictures of children and grandchildren these days.

Although retired, he was very much the family doctor to the end.  My father had a minor stroke last summer.  Ed was the one who told him that the symptoms he was having sounded like a stroke, and that he should go to the hospital.  Ed arranged for Howard to go straight to where he needed to go, and by all accounts, my dad received the best care among Ed’s former colleagues, and he has fully recovered.

When Ed went into the hospital on December 27th, his wife, Nami, assured family members that he was getting “all the same stuff that Trump got.”  Which probably wasn’t true, but in any case, no doubt he was receiving the best available care there at the hospital he knew well.  Covid led to pneumonia and blood clots, which led to multiple organ failure, and this morning, death.

Due to the pandemic and other factors, I hadn’t seen Ed in a couple of years.  Usually, at least once every year or two, I might be part of an extended family dinner of some kind there in Bethel, or I might be doing a concert at a small venue somewhere in town.  Whenever I did concerts in town, even if there were only ten people in attendance, as I recall there being on one occasion, two of the folks in the audience would reliably be Ed and Nami.  They’d show up, donate twice whatever the door charge was, and sit through the whole show, paying enthusiastic attention throughout.

It’s easy to recall the last words Ed said to me, whenever it was that I last saw him.  It was at the end of the last concert I did in Bethel, two or three years ago.  He was by then in his seventies, but still as tall as I recall him being when we were both much younger.  He was in a jovial mood, looking physically vibrant, standing his full height, beaming.  He dropped another bill into the donation basket as he and Nami walked out of the room, pausing to smile at me and say, “keep being an anarchist.”

Will do, Ed.  Thanks for everything.