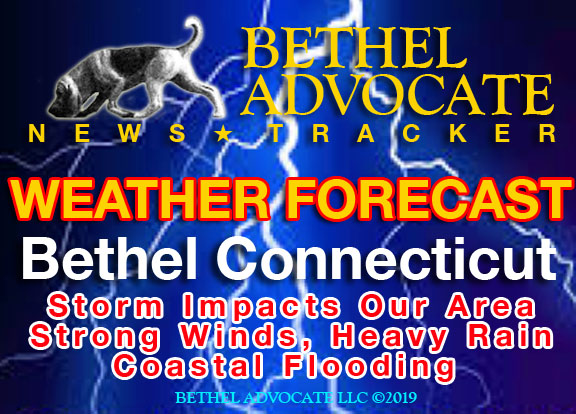 The GFS and NAM models are forecasting that a low pressure system currently located over the Great Lakes this afternoon will re-develop off the Virginia coast by this evening.  This low pressure system is then forecast to rapidly intensity as the storm moves northeast and then north, almost directly over Connecticut just after midnight.

As the storm deepens a fairly tight pressure gradient will set up across our area for several hours this evening bringing in southeast winds gusting to 30 – 40 MPH at times.  The winds are then forecast to swing around to the northwest after midnight and gust from 40 – 45 MPH across the state.  Rain, heavy at times is expected between 8:00 PM and 2:00 AM with rainfall rates exceeding 1” per hour at times.  Total rainfall is forecast to range from 2” – 4” across the state.

The strong winds and heavy rains are expected to cause some scattered power outages in many towns and some minor urban flooding overnight.  Minor coastal flooding is also expected during the times of high tide in Long Island Sound at midnight in New London and just before 2:00 AM at Bridgeport and Stamford.  Tides are forecast to run 1.5 – 2.5 feet above normal.

The rainfall is expected to taper down to showers before daybreak on Thursday, however the strong northwest winds are forecast to continue for most of the day.  The strong winds, which may gust to 50 MPH at times, will likely cause some additional power outages during the day.

The National Weather Service in Upton has issued a Wind Advisory, which is in effect until 6 PM EDT Thursday.

* WHAT…Southeast winds 20 to 30 mph with gusts up to 50 mph this evening along the coast, becoming west and expanding across the entire area tonight into Thursday.

A Wind Advisory is issued when sustained winds of 31 to 39 mph, or gusts of 46 to 57 mph, are expected or occurring. Winds this strong can make driving difficult, especially for high profile vehicles, in open areas, and on elevated roads and bridges. Use extra caution.

Rain and possibly a thunderstorm. Some of the storms could produce heavy rainfall. Steady temperature around 60. Southeast wind 11 to 13 mph, with gusts as high as 24 mph. Chance of precipitation is 100%. New rainfall amounts between a quarter and half of an inch possible.

Rain and possibly a thunderstorm before 2am, then rain likely. Some of the storms could produce heavy rainfall. Low around 47. Breezy, with an east wind 14 to 20 mph becoming west after midnight. Winds could gust as high as 41 mph. Chance of precipitation is 100%. New precipitation amounts between 2 and 3 inches possible.

Mostly clear, with a low around 39.

Mostly clear, with a low around 42.

Partly cloudy, with a low around 47.

Mostly sunny, with a high near 66.

Showers likely. Mostly cloudy, with a low around 53. Chance of precipitation is 70%.

Showers likely. Mostly cloudy, with a high near 66. Chance of precipitation is 70%.

Showers likely. Mostly cloudy, with a low around 48. Chance of precipitation is 60%.

Mostly sunny, with a high near 58.