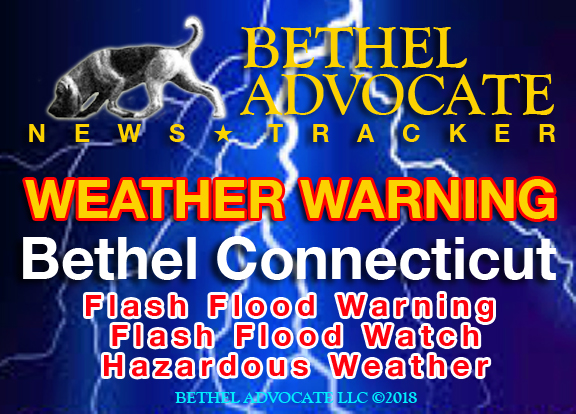 * At 1051 AM EST, Doppler radar indicated heavy rain across the
warned area. Generally 1 to 2 inches of rain have fallen. A band
of heavy rain, oriented north to south and extending through the
Atlantic Ocean, is estimated to be producing rainfall rates of 1
to 1 1/2 inches per hour. Flash flooding is expected to begin
shortly. This rainfall will also be falling during high tide on
Long Island Sound and may exacerate flooding at the immediate
coast.

* Some locations that will experience flooding include…
Bridgeport, New Haven, Waterbury, Norwalk, Danbury, Meriden,
Milford, Wallingford, Shelton, Naugatuck, Guilford, Southbury, New
Canaan, Wolcott and Newtown.Recommended actionsPlease report flooding to your local law enforcement agency when you can do so safely.

A Flash Flood Warning means that flooding is imminent or occurring.
If you are in the warned area move to higher ground immediately.
Residents living along streams and creeks should take immediate
precautions to protect life and property.ready.gov

The Flood Watch continues for

* An area of low pressure moving up the spine of the Appalachians will result in a widespread 2 to 3 inch rainfall across the region. Locally higher amounts around 4 inches are possible. Rainfall may be heavy at times.

* The heavy rain will result in the potential for flooding of urban, low lying, and poor drainage areas. Minor river flooding is expected on fast responding streams. The Passaic River at Pine Brook is forecast to go into moderate flooding tonight. In addition, flooding concerns could be exacerbated along the coast at times of high tide.

A Flood Watch means there is a potential for flooding based on current forecasts. You should monitor later forecasts and be alert for possible flood warnings. Those living in areas prone to flooding should be prepared to take action should flooding develop.

Please listen to NOAA Weather Radio or go to weather.gov on the Internet for more information about the following hazards.

* At 1105 AM EST, Reports of flooding on the Bronx River Parkway, Taconic River Parkway and Sprain River Parkway have been reported with road closures on portions of these roads. Generally 1 to 2 inches of rainfall has already fallen with additional rainfall of between 1/2 and 1 inch expected through 1 pm. This is expected to result in additional flooding in these areas.

Please report flooding to your local law enforcement agency when you can do so safely.

A Flood Warning means that flooding is imminent or occurring. All interested parties should take necessary precautions immediately.

Rain. The rain could be heavy at times. Patchy fog. Temperature falling to around 58 by 5pm. South wind 7 to 11 mph, with gusts as high as 31 mph. Chance of precipitation is 100%. New precipitation amounts between three quarters and one inch possible.

A 20 percent chance of showers before 1pm. Mostly cloudy, with a temperature falling to around 40 by 5pm. Southwest wind 8 to 16 mph becoming west in the morning. Winds could gust as high as 28 mph.

A 30 percent chance of snow showers after 1am. Mostly cloudy, with a low around 28.

Partly sunny, with a high near 39.

Partly cloudy, with a low around 25.

Mostly sunny, with a high near 37.

Partly cloudy, with a low around 25.

Mostly sunny, with a high near 37.

Partly cloudy, with a low around 23.